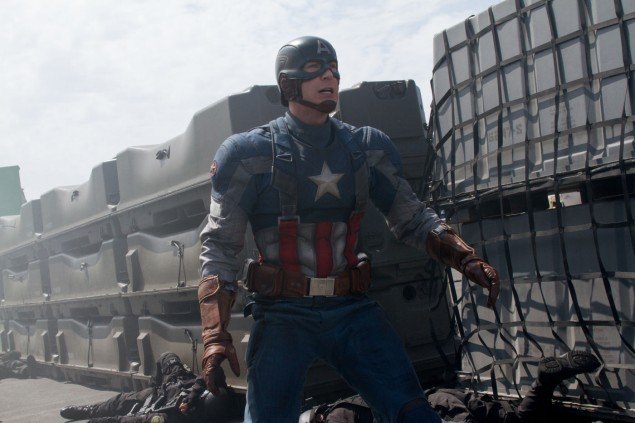 The success of the movie AMERICAN SNIPER continues to amaze, as it finally overtook the first part of the HUNGER GAMES finale, MOCKINGJAY – PART 1, to take the 2014 box office crown recently with more than $341.8 million and counting.

That’s exactly what AMERICAN SNIPER does as its story portrays one committed American solider, Chris Kyle, from a Christian family who goes from protecting and helping his fellow soldiers and the Iraqi people in the Middle East to protecting and helping his fellow soldiers and their families on the homefront in what was and should be the greatest country on God’s green earth. The movie’s final scene shows lines of American people with American flags honoring this fallen hero during his funeral procession after he was tragically gunned down by a troubled soldier he tried to help.

AMERICAN SNIPER isn’t the only Pro-American, patriotic movie from 2014 that achieved success, however.

In fact, if you look at the top five 2014 movies at the box office, you will find several movies with strong Pro-American, patriotic values.

For example, the No. 2 movie, the aforementioned HUNGER GAMES movie, with more than $337.1 million, celebrates a heroine who encourages her fellow citizens to rise up and fight for their liberty against a tyrannical government.

What can be more American than that?

The title hero in CAPTAIN AMERICA:  THE WINTER SOLDIER, the No. 4 movie with more than $259.7 million, also extols American values. Thus, in one scene, Captain America even reminds his fellow Americans that the price of freedom can be very high.

Even the No. 3 movie at the box office, GUARDIANS OF THE GALAXY, with more than $333.1 million, celebrates America. It shows an American snatched from his home in the United States and taken to another galaxy, where he becomes an heroic figure leading a ragtag group of misfits against an evil madman trying to destroy a successful capitalist civilization.

Now, that’s an American hero if there ever was one!

Put together, these four movies earned more than $1.27 billion at the domestic box office, or more than 83 percent of the approximately $1.53 billion of the top five movies.

An additional aspect of all these Pro-American, patriotic movies is the fact that all of them seem to contain redemptive values reflecting America’s Christian, biblical heritage.

Thus, in AMERICAN SNIPER, Chris Kyle and his family explicitly go to a Christian church and believe the Gospel while the other three movies display elements of Christian sacrifice, baptism and resurrection.

Of course, by the end of 2014, AMERICAN SNIPER had appeared in only four theaters, earning just $2.19 million. This means movies with strong Pro-American, patriotic released in 2014 have probably averaged more than $90 million by now, if you combine 2014 box office numbers with 2015.

Clearly, the last year in Hollywood movies has been an American one, with moviegoers preferring movies that celebrate American, patriotic values.

Hopefully, the studio executives and filmmakers in Hollywood, not to mention America’s political and journalistic leaders, will follow and support this important trend sweeping our nation.