"Will Dogs Lead to Dad?" 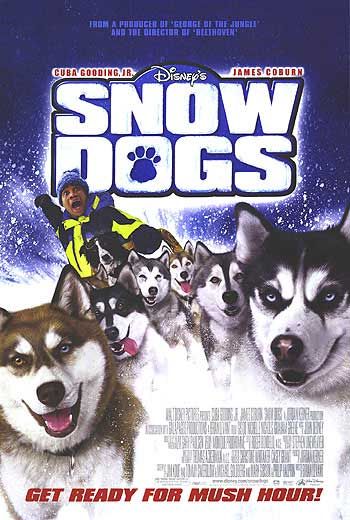 In SNOW DOGS, a successful Miami dentist, Ted Brooks, played by Cuba Gooding, Jr., gets a letter informing him that he has inherited something from Lucy, a deceased woman in Alaska whom he finds out is his real mother. His mother has left her outhouse to a crusty old man called “Thunder Jack,” because he was once struck by thunder. All the rest of Lucy’s possessions are left to Ted, including a beautiful, but rambunctious, dogsled team. Ted makes several hilarious attempts to control the unwieldy canines but becomes increasingly frustrated. Ted is ready to sell the team to Jack, when a woman named Barb tells him that Thunder Jack is his father! Ted decides to find out the truth, and undertakes an emotional wrestling match with his father that involves both dangerous adventures and hilarious mishaps.

SNOW DOGS is a cute, funny movie, with great laughs for the children and compelling and challenging heart issues for adults. It is also a moral, even biblical, movie. Ted cries out to God for rescue, and his adoptive mother tells him that she survived a plane ride only through 14 hours of prayer.

(BBB, C, Ro, Pa, Fe, L, V, A, M) Strong, but lighthearted, moral worldview with references to prayer, crying out to God in peril, denouncing lying, truthfulness upheld, & the need for family reconciliation; some Romantic elements & some pagan thoughts with joke made about Hell & its ability to warm up Alaskans, dog named “Demon,” etc.; few, if any discernible obscenities but slightly crude name-calling in tavern & allusions to protagonist’s propensity to vomit easily; mild violence with girl bartender tossing out ruffians, sledding fans pouring frozen Gatorade onto winner’s head, knocking him out, plus some possibly alarming scenes of dogs & racers in precarious, near-death, dangling-over-cliffs, falling-through-thin-ice scenes; no sex or nudity but story discreetly mentions protagonist’s unwed parents; several depictions of alcohol use; no smoking; and, miscellaneous immorality such as rebellion, rude insults & parental neglect.

Ted Brooks (Cuba Gooding, Jr.) is a likeable, popular Miami dentist who took over his deceased father’s thriving practice and is now enjoying his life as a successful single professional in one of the warmest cities in America. The only aspects of his life that mystify him are his propensity to get sick at the slightest provocation, and the tendency to have a few other unusual ticks and tastes that don’t seem to run in his family. He especially does not like dogs.

One day Brooks gets a letter informing him that he has inherited something from a lady named Lucy, a deceased woman in Alaska. Appalled, Ted’s mom apologetically informs him that he was adopted, and that Lucy is his real mother. Surprised and intrigued, Ted takes off for Alaska and heads to the tavern where his mother worked, for the reading of her will. His mother has left her coat to a young gal named Barb (Joanna Bacalso), the gorgeous but gruff-and-gutsy bartender/owner, and her outhouse to a crusty, intimidating old man whom the town calls “Thunder Jack,” (James Coburn) because he was once struck by thunder. All the rest of Lucy’s possessions are left to Ted, including a beautiful, but rambunctious dogsled team.

Ted scouts out his mother’s cabin and is sad and a little angry that he never knew her. He is amazed that she has almost no worldly possessions, and he is about to leave when he is playfully assaulted by eight “snow dogs!” Ted makes several hilarious attempts to control the unwieldy canines but becomes increasingly frustrated. Seeing the discomfort of the appalled city slicker, Thunder Jack offers to purchase the entire team for $200. Though the team is worth thousands, Ted is ready to agree and is heading out of town when Barb tells him that Thunder Jack is his father!

Being a black man, Ted doesn’t believe that a crusty white guy could really be his dad, but he decides to stay and find out the truth. When he confronts “Thunder,” really named James Johnson, he is told, “That’s ancient history …. You don’t belong here.” (Just what every son wants to hear from a father . . .) Thunder tells Ted that there was a one-night-stand in a cave and that was it. No parental involvement at all, just a smart decision to give him a better home.

Ted continues to push the matter, and shouting soon ensues. They try to out-scream each other with, “You’ve got something wrong in your head!” Hurt and angry, Ted is now even more resolved to stay and master dog sledding, just to prove himself to this estranged father, and prevent him from getting the dogs!

Again, Ted’s attempts are hilarious. He falls through the ice (crying “Help me, Lord!”), he tangles with a skunk, he loses battles of the wit with one of the dogs named Demon (voiced by Jim Belushi), and he generally makes a fool of himself to the amusement of the whole town. He has a dream one night that he is back in warm Miami, and the whole dogsled team is sunning in lounge chairs, talking to him and making fun of him (compliments of Jim Henson’s animatronics team).

Giving up again, he heads back to Miami and his dental practice. His adoptive mother comes over one night as Ted is dressed in fur with the air conditioning on full blast, watching the Alaskan sledding races begin. The mom accidentally drops a framed photo of Lucy, only to find another photo underneath. This one reveals the truth.

Ted high-tails it back to Alaska, determined to confront his father again and find the rest of the REAL story. To complicate matters, the great “Arctic Challenge” has begun, and Thunder is missing. Ted must decide if his city-boy background and determination, along with the help of a wild, but loyal dog tem, will be enough to navigate the stormy race and find and rescue his father. Can he muster the strength to return good for evil, despite the fact that there may be no emotional payoff? Furthermore, will he land a real relationship with the pretty bartender, whose crush might be turned to commitment?

SNOW DOGS is cute, funny and acceptable for all except very young children, who may be frightened by the dangers of the adventure or lost in the more adult themes. My first-grade son, however, laughed out loud during much of the movie, and was never bored. His only regret was that the “talking animals” part was very short – just a brief dream sequence. (His other regret was that his mom doesn’t take him away from Math every week to review a movie!)

The acting and production values, including Henson’s animatronics team, is top-notch, and the mix of humor and drama is just right.

SNOW DOGS was a good, moral, even biblical, movie. Ted cries out to God for rescue, and his adoptive mother tells him that she survived a plane ride only through 14 hours of prayer. His mother confesses her fear of telling the truth and her regret that she hadn’t been more truthful, and Thunder says at one point, “A man who doesn’t tell it like it is, is a liar, and I hate liars.” Cool. So does God. Genuine heart issues are revealed, and the movie beautifully portrays the redemption that comes to those who fight for their freedom through truth.

The thematic elements of SNOW DOG were incredible all around. Just as in HEARTS IN ATLANTIS, LIFE AS A HOUSE, MY FIRST MISTER, and even comedies like CORKY ROMANO, this movie shouts: Children need good fathers! This whole movie was the quest of a grown-up child to get the love and affirmation of a distant father.

Though Hollywood has just discovered this issue, the Bible has been talking about it all along. Scripture tells us that “In the last days, I will turn the hearts of the fathers back to the children.” Oh, Lord, may it be so! There is no element more crucial to a child’s understanding of God than a loving relationship with an involved father. Fathers draw their sons and daughters into life, and when the father is absent, physically or emotionally, even adult children continue to suffer greatly.

For great reading on the all-important father issue, we recommend Jack Frost’s ministry tapes and books, as well as the book TRANSFORMATION OF THE INNER MAN by John and Paula Sandford. (It is important to note that the adoptive father in SNOW DOGS was portrayed as a wonderful, smart, involved dad who continually spoke life and a future to his son. Way to go!)

In short, do enjoy a great family outing to SNOW DOGS, but be sure to remind your children that you can’t get struck by thunder!