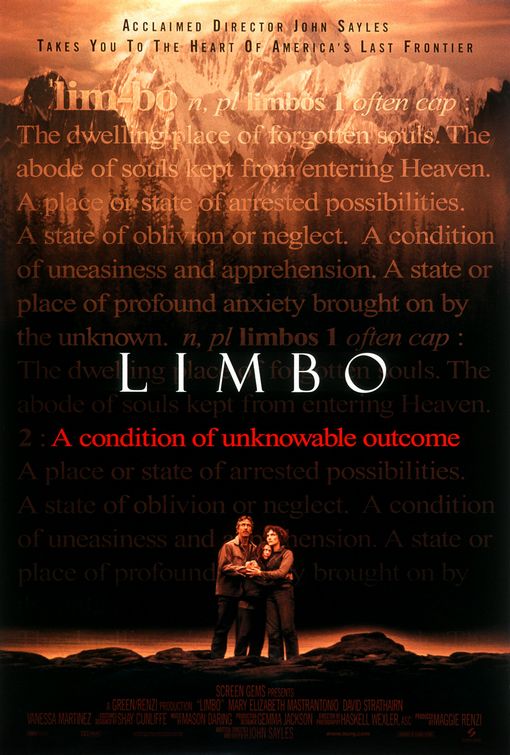 In LIMBO, an ex-fisherman in a town of malcontents in Alaska develops a romance with a traveling singer, but he, the singer and the singer's daughter get stranded on an isolated island and must try to survive the wilderness and two murderers until they can perhaps be rescued. Despite some positive moral elements and provocative themes, this well-crafted thriller has a politically correct, humanist worldview and contains foul language, one scene of implied fornication and a minor anti-Christian stereotype.

There’s a term that anthropologists use to describe something which happens in many religious rituals and stories. They use the word “liminal” to describe the point in a religious ritual or story where the neophyte or protagonist enters a transition phase where he or she is on the threshold of moving from one significant place or status to another. Such a person is in a liminal state of neither here nor there (or both here and there), a place that the late American anthropologist Victor W. Turner described as “betwixt and between.” A person in a liminal state can also sometimes be seen as an outsider, someone who inhabits the borders of life, a place or a situation. Being in a liminal state can be a very dangerous place to be, and that’s why it’s in such places as these that conflicts and battles take place in many stories.

Consequently, teenagers have been very popular characters in contemporary movies, ever since REBEL WITHOUT A CAUSE, because teenagers have a liminal status in today’s society – they are considered neither fully children nor fully adults. The private detective in many American mystery stories is also often a liminal figure, an outsider who must be able to travel to many different worlds within society to uncover the villain or villains. Thus, Jim Rockford of THE ROCKFORD FILES lives on the edge of Los Angeles, in a trailer home on the beach in Santa Monica. Finally, Jesus Christ in the New Testament is in a liminal situation because he is both fully man and fully divine. He leaves Heaven to die for our sins and to pass the moral test which Adam failed, and then returns to sit at the hand side of the Father, where he reigns as the King of Kings and the Lamb of God.

The word liminal is related to the word limbo, which can mean a place of restraint or confinement, a transitional place or state, or a state of uncertainty. John Sayles, director and screenwriter extraordinaire, milks all of these ideas in his new movie, which actually goes by the name LIMBO. In the movie, he brings the audience to a state of uncertainty, an exiled place trapped between optimism and pessimism, hope and despair, and he leaves them there in a most unnerving, yet provocative, way.

David Strathairn plays Joe Gastineau, an ex-fisherman with a tragic past in the small Alaskan town of Port Henry. Because of his past, Joe has become an outsider in the town. He works for the two new lesbians in town, also outsiders looking to be accepted by a town that seems to be filled with malcontents.

In the first half of the movie, Joe develops a romantic relationship with nomadic singer Donna De Angelo, played by Mary Elizabeth Mastrantonio. He also becomes friends with Donna’s gloomy daughter, Noelle (Vanessa Martinez), who’s become alienated from her mother and her mother’s lifestyle of traveling from city to city and latching onto one ne’er-do-well man after another. An excellent writer, Noelle is so alienated that she’s become a “cutter,” a teenager who mutilates their skin in a misguided cry for love and attention. Like Noelle, Joe is an eternal pessimist who sees the dark side of life and makes jokes about the townspeople murdering one another during the dark days of winter, but he’s a compassionate, caring man who draws out the eternal optimism in Donna, Noelle’s mother.

In the second half of the movie, these three people are stranded in the wilderness during an outing on a boat Joe is using. They become stranded when Joe’s half brother Bobby, who’s secretly mixed up with evil marijuana smugglers, gets murdered. The murderers come looking for Joe, Donna and Noelle. Living in an old cabin built by long-dead fox farmers, they hide out from the murderers. Joe and Noelle don’t think much of their chances but Donna continues to hope for their rescue. Eventually, Joe and Noelle take their place at Donna’s side, but director Sayles leaves the issue hanging in a bold, surprising move. The audience remains caught between optimism and pessimism, hope and despair, to apply their own worldview to Joe, Noelle and Donna’s ultimate fate. Limbo indeed.

LIMBO has a politically correct, humanist worldview with biblical, anti-capitalist & anti-Christian elements. None of the three protagonists, nor none of the townspeople, have any semblance of religious belief, despite their positive qualities. The movie views as minor villains both Joe’s capitalist oriented half-brother and the town’s rich capitalist, who wants to turn the wilderness into a theme park for tourists. The movie also seems to oppose the cold reception the two lesbian women encounter in the town. In fact, Joe’s sinful half-brother makes a crucial snide remark about the two women’s lesbianism, thereby increasing the movie’s political correctness. Finally, Noelle reads a diary in the cabin from the daughter of the fox farming family. The family’s hymn singing, Bible reading mother goes mad and kills the foxes because she thinks the foxes are the spawn of Satan. She then commits suicide. After Noelle reads this part of the diary, her mother assures her that she would never desert Noelle like the mother in the story did. To make the crazy mother a strong Christian is another unnecessary example of political correctness.

Still, LIMBO is an excellently crafted story that slowly draws you into its drama. Ever since he wrote the scripts for such thrillers as ALLIGATOR, John Sayles has had a knack for making generic formulas crackle with rich atmosphere, well-drawn characters and provocative themes. Even when he takes the audience to places they don’t want to go, he manages to leave them something to remember, so that they can enjoy the journey in ways that are deeper than what other filmmakers give. Thus, despite some strong foul language and implied fornication between Joe and Donna, LIMBO provocatively shows the audience that, even if you know an important situation in life is hopeless, it’s better to bravely take a stand against the fog around you, on the side of hope, rather than give up and crawl back into the cave of despair. That’s a pretty good message for even a humanist movie to send.