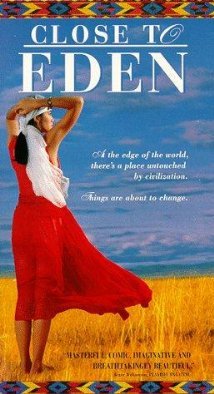 CLOSE TO EDEN, set in inner Mongolia, tells the story of Gombo, a Mongol herdsman, and his coming face-to-face with the modern world in contrast to his simple, unaffected way of life on the steppes. The film is one of those lyrical, poignant portraits of life which transcends film convention to tell a story through visual images. It is a captivating work of art marred by a smattering of foul language.

(B, L, S) A heart-warming portrait of a man of integrity marred by 17 obscenities, four profanities and implied sexual relations within marriage, but nothing else.

CLOSE TO EDEN, set in inner Mongolia, tells the story of Gombo, a Mongol herdsman, his bride, Pagma, and their coming face-to-face with the modern world in contrast to their simple, unaffected life on the steppes. The traditional Mongol mating ritual is rebuffed by Pagma, a city girl, who reminds Gombo that they already have three children and Communist Chinese law limits them to two. Gombo can’t quite adjust to this limitation on his freedom as a Mongol, for he is not Chinese, he is an heir of Ghengis Khan, and Khan was a fourth child. When Gombo meets Sergei, a Russian truck driver, he is persuaded to go to town with him to buy condoms. Gombo is too ashamed to buy the condoms and buys a TV and a bicycle instead. Gombo soon has a vision of Mongol warriors chastising him for having abandoned the old ways.

CLOSE TO EDEN opens with a beautiful vista of the steppes of Mongolia and is one of those lyrical, poignant portraits of life which transcends film convention to tell a human story through visual images. This exquisite film is a captivating poem that gives us a unique insight into human nature and culture. There is no doubt that Gombo is created in the image of God, although beset by sin–his desires, his ignorance and his willfulness. Unfortunately, Sergei’s dialogue is peppered with some foul language–one way that Communism corrupted him and robbed him of his soul. CLOSE TO EDEN deserved the Venice Film Festival Golden Lion Award.