"A Crime Overcomes a Criminal" 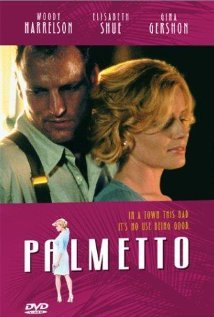 As PALMETTO opens, Harry Barber, played by the seedy Woody Harrelson, is released from prison after serving two years for a crime he didn’t commit. As a local newspaper reporter, Barber acquired dangerous information about a powerful, corrupt Palmetto politicians and ended up getting framed and sent to jail. Now, he is free and aimless. At a bar, he spots an attractive woman, named Rhea Mulroux, wife of the local rich guy. Rhea manages to persuade Barber to assist her in “kidnapping” her rich husband’s 17-year-old daughter. The daughter agrees, and the ransom money will be shared among the three participants. As he is drawn into this murky situation, Barber finds that nothing and no one are what they seem.

PALMETTO emerges as a dark comedy with a storyline that twists and turns, but never becomes contrived. It is seldom certain on whose side any of the characters are - their motives are purely selfish. As they explore their schemes violence mounts, and seduction fills the screen. PALMETTO is quite raunchy. As its initial kidnapping premise makes clear, none of these characters is interested in taking the moral high road, only in saving his own skin. It is a crime comedy with a large dose of seamy situations.

It’s hard to believe that Woody Harrelson once played the naive hayseed bartender in TV’s beloved CHEERS. His movie roles seem to get progressively seamier, as exemplified by his portrayal of the title character in THE PEOPLE VS. LARRY FLYNT. (For a more humane role, see him in WELCOME TO SARAJEVO.) Harrelson’s role in the darkly comic PALMETTO is no exception. He plays Harry Barber, a man of flexible morals and a one-time writer drawn into a hare-brained kidnapping scheme. The film is set in Palmetto, Florida and its recurring motif is palmetto bugs (giant cockroaches). The cockroach theme is enacted by the film’s low-life characters, with Harrelson portraying the chief insect.

As PALMETTO opens, Harry Barber is released from prison after serving two years for a crime he didn’t commit. As a reporter for the local newspaper, Barber acquired some dangerous information about a few powerful, corrupt Palmetto politicians and, as the reporter who knew too much, ended up getting framed for bribery and sent to jail. Now, he is free and aimless, with no job and no reason to remain in Palmetto beyond the immediate lure of his seductive girlfriend, Nina (Gina Gershon).

At loose ends, Barber ambles into a bar and orders a drink. He soon spots an apparently well-heeled and well-endowed woman (Elizabeth Shue), who slinks into the bar to use the phone. She leaves her purse behind, and when she returns to retrieve it, finds Barber exploring its contents. She pretends to believe that he has rescued her purse for her and offers to buy him a drink. Identifying herself as Rhea Mulroux, wife of the local rich guy, this modern-day Mata Hari soon manages to persuade Barber, for whom prison apparently served as a primer in petty crime, to assist her in “kidnapping” her rich husband’s 17-year-old daughter. The daughter supposedly agrees to the scheme, and the ransom money will be shared among the three participants.

As he is sucked further and further into this murky situation, however, Barber finds that nothing and no one are what they seem, and he may be a pawn in a bigger game. The kidnapping “victim” may or may not be the wealthy Felix Mulroux’s daughter, although she has inherited seduction skills from her step-mother (or is it really her step-mother?). Soon the plan goes horribly awry and continues to spin hopelessly out of control throughout the movie.

It may sound complicated, but the plot’s light-hearted complexity proves to be half the fun. PALMETTO emerges as a dark comedy with a storyline that twists and turns continually, but never becomes exhausting or contrived. It is seldom certain on whose side any of the characters are – their loyalty is flexible and their motives are purely selfish. Yet, they are rather likable. Harry Barber, loutish as he is, is a congenial fellow that you can’t help liking. He is sort of a sleazy Inspector Clouseau. Shue shines as a campy, exaggerated Marilyn Monroe gone bad. “I’m just a girl with a little ambition,” she explains when her conniving begins to catch up with her.

As amiable and clever as this sly comedy is, PALMETTO is also quite raunchy, with plenty of questionable elements befitting its ignominious characters. As its initial kidnapping premise makes clear, none of these characters is interested in taking the moral high road, only in saving his own skin. Like Barber’s habit of ordering drinks just so that he can smell them (he stopped drinking long ago), the film flirts with outright depravity but never wallows in it. Harry Barber is amoral but not immoral; he is an average Joe who simply lacks moral backbone. By the end of the movie, the audience can’t help but hope that the book he writes from prison will be a smash success.