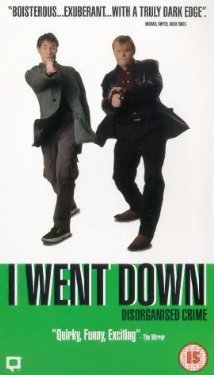 The Irish movie, I WENT DOWN, contains a few clever characters but remains an isolated, culturally-specific crime comedy. A pair of gangsters seek another criminal who has been having an affair with their boss's wife. The moral American looking for a good time at the movies will probably be lost in the thick accents, offended by the discernable obscenities and disturbed by some of the other rough fare.

You know there are going to be problems with enjoying a movie when you can’t make out half the dialogue, but you can make out all the obscenities and profanities. I WENT DOWN has already broken European box office records to become the highest grossing independent Irish film in history, but it may have a difficult time finding an audience in America. Containing a few clever characters, it remains an isolated, culturally-specific Irish crime comedy.

Git Hynes (Peter McDonald) is a stubbornly moral ex-convict whose girl just dumped him for his best friend. Despite his kindness, he must repay a debt to brutish crime boss Tom French (Tony Doyle from CIRCLE OF FRIENDS). The sadistic Mr. French pairs Git up with Bunny Kelly (Brendan Gleeson), an older hot-tempered gangster who is unhappily estranged from his wife. The two men must traverse the boggy Irish badlands in pursuit of French’s roguish old gangland associate Frank Grogan (Peter Caffrey), who apparently has been having an affair with Mr. French’s wife.

After a few nights in cheap motels, fornication with some local girls and chasing down a few rabbit trails, the pair meet Frank, tie him up, throw him in the back of the car and take him to the drop-off point. There, a hit man is ready to bump off both Frank and Git. Git and Frank escape with Bunny’s help, and Git re-thinks his task. They call Mr. French, who assures them of a safe meeting. When they meet in a wooded area, Mr. French assures them he is not carrying a weapon, but when Mr. French asks Git to dig a hole behind a certain tree, a gun and some cash are produced, resulting in tragedy.

It is hard to understand the success of this film. It received overwhelming acclaim at 1997’s Edinburgh Film Festival and made off with four major awards including Best New Director and Best Screenplay. Though showing some care in its production values, it pales in cleverness and entertainment to other crime comedies like GET SHORTY. It seems to be somewhat derivative of PULP FICTION with similar inserted chapter titles to scenes within the story.

While Ireland locales are picturesque or revealing, I WENT DOWN leaves little for American audiences to appreciate. Many critics leaving the screening were confused about the heavy Irish accents and weren’t sure what to make of the film. Yet, Brendan Gleeson and Peter McDonald fare well as a team, and they may be getting the kind of international attention which Robert Carlyle is now receiving after his lead turn in England’s THE FULL MONTY.

I WENT DOWN may only be appreciated by die-hard crime comedy fans, and even then, may be only for those who want to study Irish film. The moral American looking for a good time at the movies will probably be lost in the thick accents, offended by the discernable obscenities and disturbed by some of the other rough fare.