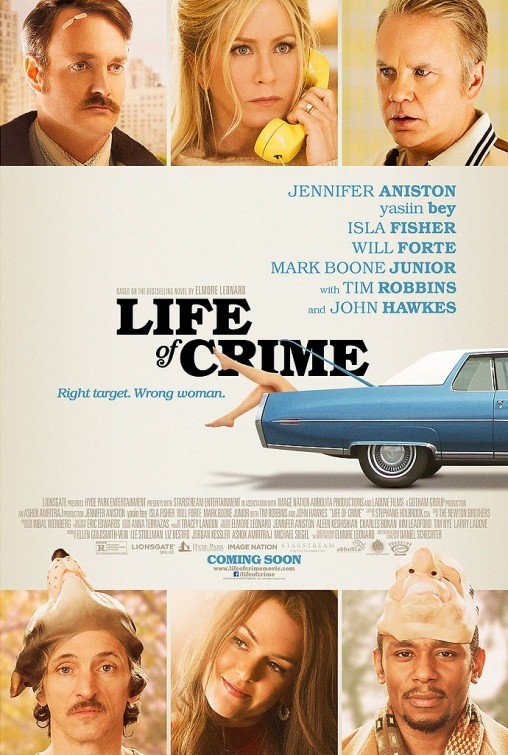 LIFE OF CRIME is a crime comedy. It stars Jennifer Aniston as Mickey, a rich housewife whose husband is cheating on her while hiding $2 million from her in a secret bank account. When two bumbling criminals are hired to kidnap her for a $1 million ransom, they think it will be easy. What they didn’t realize is that Mickey’s husband filed for divorce two days before and has no interest in saving her. The kidnappers hold Mickey at the house of their overweight Neo-Nazi friend. More comical complications ensue when the kidnappers start bickering among themselves.

Based on a novel by Elmore Leonard, LIFE OF CRIME has a complicated plot with many twists. It is well done and often funny. However, only Mickey the kidnap victim is an innocent, appealing figure, until the very end. Everyone else is engaged in all manner of criminal, immoral behavior. The movie also has lots of explicit crude language and other lewd content. LIFE OF CRIME has its laughs, but it will make discerning viewers feel like they’re covered in grime by the end.

(RoRoRo, PaPa, LLL, VVV, SSS, NN, AA, DD, MMM) Very strong Romantic worldview with strong pagan elements; at least 70 obscenities, nine strong profanities and five light profanities; strong violence, mostly played for laughs, includes one criminal intentionally hits another with his van and then backs up over the man again, several gunfights, people shot, woman pokes peeping tom in eye with lit cigarette when she catches him, serious scene involving attempted rape, but woman kicks attacker in groin, and criminal is beaten by other criminal, who’s started to like the woman, man knocked unconscious in head and locked in closet, criminal accidentally hit by police car and gunfight ensues; three graphic depicted sex scenes but brief, and themes of adultery; upper female nudity; alcohol use and drunk driving causes crash; smoking and one character smokes marijuana; and, Neo-Nazi kidnapper dresses up like a police officer in an attempt to scare answers out of a man, kidnapping for ransom, everyone seems to be lying, disguising and deceiving each other over the million dollar ransom they’re fighting for with the kidnapping, greed, man doesn’t want to provide ransom for his wife because he just filed divorce papers.

LIFE OF CRIME is a crime farce that follows the double-crosses and mishaps that occur when a cheating husband surprisingly won’t pay the $1 million ransom for his kidnapped wife. LIFE OF CRIME is an abhorrent movie with a very strong Romantic worldview containing strong pagan elements, foul language and explicit lewd content.

The movie takes place in 1978 Detroit and appears to be trying to replicate the sense of style and time period that worked so well for AMERICAN HUSTLE last year, although it’s decidedly a more lightweight movie. Jennifer Aniston stars as Mickey, a rich housewife whose husband is cheating on her while also hiding nearly $2 million from her in a secret bank account through his shady real estate deals.

When two bumbling criminals played by Mos Def and John Hawkes are hired to kidnap her for a $1 million ransom, they think it will be an easy score. What they didn’t count on is that Mickey’s husband (Tim Robbins) had filed for divorce just two days before and has no interest in saving her. Instead, he’s at a getaway with his mistress and tries to see if the kidnappers are bluffing. Adding to the mayhem is the fact that a neighbor (Will Forte) who’s secretly in love with Mickey shows up trying to seduce her and is knocked out and locked in a closet by her kidnappers.

The kidnappers hold Mickey at the house of their Neo-Nazi criminal friend who’s both comically overweight and whose house is filled with Hitler memorabilia. More complications ensue as the kidnappers start to bicker among themselves. This leads to one of them making his own set of plans with the kidnap victim’s husband’s mistress.

Based on a novel by acclaimed writer Elmore Leonard, this is a complicated plot with a lot of twists. On an artistic level divorced from moral considerations, it’s well done and often funny. However, from a Christian standpoint, only Mickey the kidnap victim is an innocent and appealing figure. Everyone else is engaged in all manner of criminal or immoral behavior.

While it is hard to take these actions seriously since they are portrayed in a ridiculous fashion, it may be that the fact the filmmakers try to make viewers laugh at such behavior is of even greater concern. If any of this was meant to be taken truly seriously, it would be an unbearable two hours at the movies.

The performances are all solid, with everyone scoring laughs on a morally base level, yet with Aniston still stronger than everyone else as she delivers a fully sympathetic performance. Her performance only goes wrong in the movie’s closing shot when [SPOILER] it becomes clear that Mickey’s about to turn the tables on nearly everyone by joining her kidnappers in seizing another person.

Writer/Director Daniel Schechter does a good job of keeping humorous crime novelist Elmore Leonard’s work moving at a fast pace. Sadly, he includes a lot of strong, explicit foul language and lewd content in LIFE OF CRIME. Ultimately, the main question for media-wise viewers is whether there is any redeeming or positive message to this movie. LIFE OF CRIME has its laughs, but it will make discerning viewers feel like they’re covered in grime by the end.