"Family and Friendship Are Worth Fighting For" 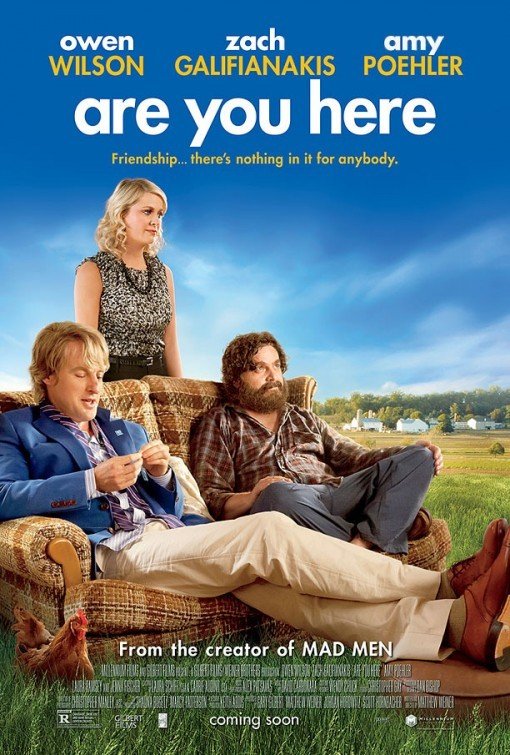 ARE YOU HERE is a comedy about childhood best friends, Steve and Ben. Steve and Ben have grown up to be immature and irresponsible, but functioning. Steve is an alcoholic, marijuana-consuming, womanizing weatherman who’s good at his job, sober or not. He looks after Ben, who’s intelligent but has some bipolar mental instability. Ben’s father dies. Surprisingly, Ben inherits most of his money, property and business – much to the chagrin of Ben’s practical sister, Terri. When Ben has an epiphany about what to do with his life and his inheritance, Steve and Ben finally face their true selves.

ARE YOU HERE mixes some very funny, offbeat characters and dialogue with a growing moral sense. It takes the three main characters from shallow sinfulness to a sense of caring and purpose. It also says that friendship and family are something worth fighting for in this life. Along the way, there are some overt Christian references to God, Jesus and Scripture. Even so, extreme caution is warranted for ARE YOU HERE because of strong adult themes, marijuana use, foul language, and other lewd content.

(B, C, PaPa, E, H, LLL, VV, SS, NN, A, DD, MM) Light moral, redemptive worldview as man cares for his childhood friend despite being terribly flawed himself and estranged brother and sister eventually reconcile after father dies and gives all of the inheritance to the brother, with some Christian elements as two friends and others say grace before eating, another reference to God by Amish boy, minister reads Scripture over deceased at a funeral, and some forgiveness, mitigated by some strong pagan and light environmentalist elements and behavior, plus a possible humanist implication when bipolar man seems to get better just or mostly because of medication; at least 57 obscenities and 15 profanities; light and strong violence includes man starts fistfight in bar and man’s friend chops off head of chicken to be cooked for dinner; heavy kissing and implied fornication between Angela and Ben, implied sex between husband and wife, implied fornication between anchorman and other women, including prostitutes, one man is a Peeping Tom; upper and rear female nudity and upper and rear male nudity; alcohol use; two friends smoke a lot of marijuana in cigarettes and pipes, man takes prescription drugs for mental stability, and man’s sister takes a needle full of fertility hormones; and, moral relativism, lying, betrayal, man should be fired from TV job but boss keeps him because he’s good for ratings, dysfunctional family, and other bad role models.

ARE YOU HERE is a comedy about two immature, marijuana smoking childhood friends forced to become more mature. Despite a positive moral message and worldview overall, ARE YOU HERE has a lot of crude language and other lewd content requiring extreme caution.

Steve (Owen Wilson) and Ben (Zach Galifianakis) have been best friends since they were children. They’ve grown up to be immature and irresponsible, but functioning in society. Steve is an alcoholic, marijuana-smoking, womanizing weatherman who’s actually good at his job, whether sober or not. He looks after Ben, who has some mental, bipolar instability, though he’s highly intelligent. Ben is completely against people eating meat and thinks everyone should go back to living off the land.

When Ben’s father dies, he asks Steve to go with him to the rural area his father lives for the reading of the will. Ben discovers he will inherit most of his father’s money, store, farm, house, and land – much to the chagrin of his practical and controlling sister, Terri. Then, Ben has an epiphany about what to do with his life and his inheritance. He’s decided to create a society where the people respect the land and return back to living of the land, eating their own produce. Some of this comes out of the fact that he grew up on a farm in Lancaster, Pennsylvania surrounded by Amish neighbors. In this moment of revelation, Ben writes his mission plan, begins getting people interested in what he wants to do and creates something he calls “the Omega Society.”

However, Ben’s sister, Terri, tries to get a judge to find him mentally unstable. Although the judge and a psychiatrist find he’s not completely of sound mind, they rule he poses no threat to society, and Ben keeps his inheritance. At the same time, Ben’s friend Steve becomes attracted to the dead father’s beautiful young widow, Angela.

Of course, Terri detests both Steve and Angela, her much younger stepmother. She wants them to stay out of the conflict between her and her brother, Ben. Eventually, Angela sleeps with Ben, and this seems to snap Ben back to reality. He starts taking medicine to control his behavior and even shaves his beard! Ben is grateful to Angela, but neither has any intention of being in a committed relationship with the other. Steve, however, has grown very fond of Angela and even stops smoking, drinking, and womanizing. Naturally, he’s crushed when he finds out what his best friend has done, but in time he accepts what happened and forgives. There is also reconciliation between Terri and Ben as Angela encourages Ben to speak with Terri about a viable business plan for their father’s grocery store. Terri softens, and she and Ben begin working together.

ARE YOU HERE is well done, with some funny moments and generally good pacing. Both Steve and Ben’s characters develop and change for the better in the end. However, the movie contains foul language, nudity, adult themes, and other lewd content. Also, a chicken is decapitated for dinner.

ARE YOU HERE has a light, redemptive worldview with some strong immoral content. It features deeply flawed people who strive to change their lives for the better by the end. Early in the movie, there are songs with offbeat/irreverent lyrics about God and Jesus, including Bob Dylan’s “Highway 61 Revisited” and another song in which a singer asks Jesus “to dropkick me through the goalposts of life.” These verses don’t seem to have a particular point other than perhaps setting up the idea that there’s a grand moral, redemptive scheme at play in Writer/Director Matthew Weiner’s (of AMC’s acclaimed TV series “MAD MEN”) screenplay. The movie contains other religious references, including a scene where people say grace before a meal, a reference to God by an Amish boy, and a minister reading Scripture during the father’s funeral.

Thus, ARE YOU HERE seems to deal with big questions of faith and right and wrong. For example, Owen Wilson’s weatherman character is constantly stoned on marijuana and attempting promiscuity with numerous women before it becomes clear that his immoral lifestyle and happy attitude masks a deep sadness and emptiness. He admits this newfound awareness in a powerful scene with costar Zach Galifianakis. Meanwhile, Amy Poehler has a particularly strong supporting role as the seemingly uptight sister, as she competes against Ben for their father’s fortune. At first, she appears to be mean and greedy, but it slowly becomes clear that she deeply cares for her brother and is merely trying to make their father’s fortune last for the true benefit of them all.

ARE YOU HERE mixes some very funny, offbeat characters and dialogue with a growing moral sense that takes the characters from shallow sinfulness to a sense of caring and purpose. The foul language is excessive, however. There’s also a nude scene of a woman talking to Owen Wilson’s character after they fornicate. In addition, Wilson spies on an attractive neighbor as she changes clothes and is naked along the way. However, the movie also shows that his behavior is making him very unhappy and is very unhealthy. In contrast to this, the simple yet steadfastly faithful Amish people living nearby are shown positively, with Ben’s character drawn to them repeatedly as a source of refuge whenever he feels overwhelmed by the world. At one point, Amy Poehler’s character asks an Amish person what he would do if he couldn’t have kids. He mentions God in his reply to her. She then asks him, “What if you don’t believe in God?” and he replies, “Maybe that’s why you don’t have children.” It’s a strong and affecting moment in the movie.

Ultimately, the movie’s message is that friendship and family are both worth fighting for. Sadly, these positives are mitigated by the strong pagan, adult content in ARE YOU HERE. So, MOVIEGUIDE® advises extreme caution.