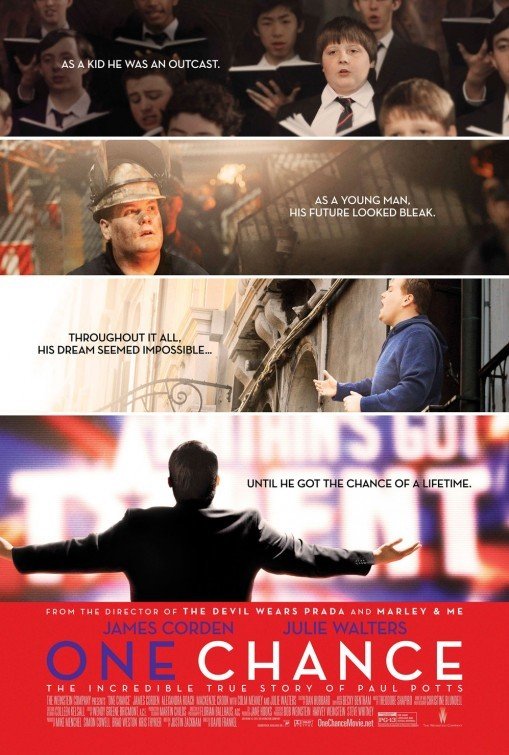 ONE CHANCE is an inspiring, well-made movie. Paul Potts has been bullied all his life about his weight and his voice. Since he was young, Paul has loved to sing opera, but he lacks confidence. Few people believe in Paul. One day Paul meets the girl he corresponds with online, Julie-Ann. The two click, and Julie-Ann inspires Paul to follow his passion of singing opera. Paul wins a talent competition and uses the money to attend an Italian vocal school. However, he chokes up in front of his idol. Will Paul gain the confidence he needs to succeed?

ONE CHANCE is an entertaining, inspiring movie. It’s both funny and heartwarming. The acting is excellent. James Corden does a remarkable job playing Paul. ONE CHANCE has a strong Christian worldview. It shows that with encouragement, courage, and hard work, you can use the gifts God gave you and accomplish great things. Paul mentions attending church and sings Christian songs. There is some crude comment, however, so caution is advised. The storyline is a bit episodic. Otherwise, however, ONE CHANCE is very well produced.

ONE CHANCE is an entertaining, inspiring movie with a strong Christian worldview.

Paul Potts has been bullied all his life about his weight and his voice. Ever since he was a young boy, Paul has loved to sing opera, but he has no confidence. Only a few people believe in Paul, including his boss and friend. Paul has been texting a girl he met online, Julie-Ann, for a year but has never taken action, until his friend grabs his phone and sets up a meeting spot for the two. Finally meeting up, Julie-Ann and Paul are nervous. On their way back from the train station, they run into Paul’s mother, Yvonne. Yvonne immediately asks Julie-Ann to lunch, and she meets the whole family, including Paul’s father, Roland.

Julie-Ann inspires Paul to enter a talent competition to win money. Winning, Paul uses his money to go to Venice and take a three-week opera lesson. Weeks pass, and Paul is picked to perform in front of his idol, who could make his career. When Paul finally gets in front of his idol, he chokes and fouls up his performance. He’s told that, if he doesn’t have the confidence to perform, he will never be a great opera singer. Completely distraught, Paul returns back home and goes back to his old job as a cell phone salesman.

Will Paul ever be able to perform in front of audiences and show people his beautiful voice?

ONE CHANCE is superbly made, with some great acting. The movie is both funny and heartwarming. James Corden does a remarkable job playing Potts. The storyline is sometimes episodic. Otherwise, however, the story is very compelling.

ONE CHANCE is an inspiring movie showing that encouragement, courage, and hard work can help you use your God-given gifts and succeed. Paul mentions going to church to sing. He also sings Christian songs. Although there is some crude commentary and violence, ONE CHANCE has a strong Christian, moral worldview.