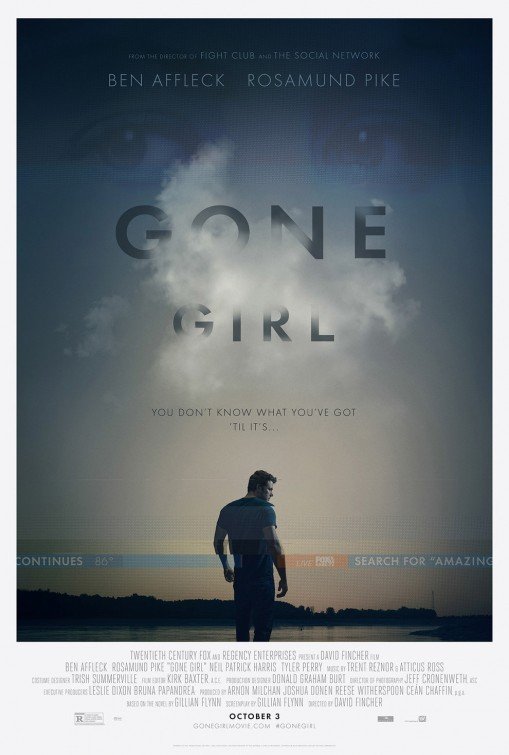 Based on a bestselling novel, GONE GIRL is a riveting mystery thriller. It stars Ben Affleck as Nick, the co-owner of a small-town bar who finds one morning that his rich wife has disappeared. Nick races to discover what happened to his wife. Meanwhile, he finds himself under investigation by the police and the victim of unceasing tabloid-style Cable TV coverage that wears on his peace of mind. These factors would be the heart of most other thrillers, but the highly ambitious team behind GONE GIRL have seemingly dozens of plot twists up their sleeves from there.

GONE GIRL features a screenplay written by the novel’s author Gillian Flynn, directed by David Fincher of FIGHT CLUB. Packed with tension, shot with masterful skill and totally absorbing from start to finish, GONE GIRL is a tour de force. Ben Affleck and Rosamund Pike as the complex married couple deliver excellent performances. However, the movie’s crude content, including many “f” words, is excessive. Also, a bloody murder scene is over-the-top. This content, and the story’s dark characters, make GONE GIRL too excessive for media-wise viewers.

(PaPa, B, LLL, VVV, SSS, NN, A, D, MM) Strong pagan worldview with some moral elements in a dark mystery thriller with dark characters about a marriage on the rocks where the wife goes missing and apparently is kidnapped or murdered, perhaps by her husband, or was she?; at least 77 obscenities (including many “f” words), two strong profanities and 13 light profanities; one extremely bloody murder scene in a bedroom when a character’s throat is suddenly slit by a box cutter, implied home invasion, it’s implied that a woman hits her cheek with a hammer, faked murder scene with blood that’s cleaned up, armed robbery; extreme sexual content includes depicted oral sex between married couple, depicted adulterous fornication, another explicit scene of adultery that isn’t consummated, a scene of implied adultery, depicted fornication; shots of upper female nudity and rear male and female nudity, plus some upper male nudity; alcohol use; smoking; and, lying, deceit, people deceive the police and the media, media sensationalism but rebuked, depiction of dysfunctional marriage suggests an attack on the institution itself, male protagonist’s alzheimer’s-stricken father is very mean, and manipulation.

GONE GIRL paints a disturbing portrait of a seemingly perfect marriage, yet one that has gone from being touched by magic to being utterly toxic. It stars Ben Affleck and Rosamund Pike as Nick and Amy, a couple of professional magazine writers in New York City who meet in 2005 and have a happy and highly sexual relationship until the economy goes cold three years later.

The movie shows how their marriage is hurt by economic recession, layoffs and relocations. It alternates this slow buildup of disappointments with a fast-paced present-day pileup of stomach-churning clues that Nick finds when it appears his wife has been either kidnapped or killed by a home invader.

As Nick races to discover what happened to his wife, he finds himself under investigation by the police and the victim of unceasing tabloid-style Cable TV coverage that slowly wears on him as well. These factors would be the heart of most other thrillers, but the highly ambitious team behind GONE GIRL have seemingly dozens of plot twists up their sleeves from there.

GONE GIRL is written by Gillian Flynn, who adapted her own smash-hit novel for the screen. The book sold two million copies in hardcover alone during its first year in print, underscoring the storytelling power of its author, a power that is only enhanced by the frequent casting surprises in the movie’s 2-½ hour running time.

To reveal more about this movie’s intricate plot would be a crime in itself. Surprises unfold all the way through to the movie’s final shot. The twists in GONE GIRL will both make jaws drop repeatedly and then also wag obsessively afterwards in discussions of who did what to whom and why. The story’s many twists also may lead viewers to wonder whether Flynn and the team behind this movie are poking a hole into all marriages or merely analyzing this particular one.

That is a major question for discerning viewers to consider, as the opening and closing narration by Nick makes marriage sound like an unpleasant emotional and psychological prison or war zone. While they are indeed just one couple, the movie shows no balance of happy marriages or families. This fact leaves one to assume that Flynn and Director David Fincher are attacking the institution of marriage itself.

GONE GIRL has frequent foul language combined with a few fairly graphic sex scenes, brief but explicit nudity and a brutal murder scene that occurs during a seductive bedroom scene. The movie definitely earns its R rating and absolutely should not be seen by children or teenagers. It also should also be noted that deception, lying and double-crossing are the order of the day among all the major characters. That said, most of the sex is cut away from fairly quickly, and the one violent, graphic murder is portrayed as unequivocally evil.

Through it all, GONE GIRL is a movie that attains perfection and zips quickly through its lengthy running time. It barely gives viewers a chance to catch their breath and wrap their minds around the latest twisted moment. That Flynn and director Fincher (SEVEN, THE SOCIAL NETWORK) manage to do this even while leaving viewers to wonder throughout which characters are meant to be appreciated and which are meant to be despised is a cinematic sleight of hand that stands up in comparison to the best of Hitchcock’s darkest explorations of the human soul in movies like VERTIGO.

Ben Affleck gives a rich, multilayered performance as Nick, but it’s the rest of the cast that delivers the biggest surprises. Rosamund Pike delivers a startling performance as Amy. Her character’s story is brought to life through beautifully etched and sharply edited, often shocking, flashbacks. In fact, the movie is so strong that even Tyler Perry steals several scenes as the ace defense lawyer Nick hires to clear his name. In addition, Neil Patrick Harris is believable as the dramatically dark flip side of his womanizing Barney on the just-ended CBS sitcom HOW I MET YOUR MOTHER.

Director Fincher turns the screws with precision, leaving viewers with a haunting portrait of a marriage gone wrong and the disturbing awareness that there are others like them across our land. Some of the movie’s best parts, however, are when it takes a lot of satirical stabs at Cable TV news and America’s tabloid obsessions. In the new 24-hour media age, the latest flash of lurid temptation takes precedence over facts every time. In fact, by the end of the movie, it’s almost as if the voracious tabloid media has trapped the story’s two protagonist in a Hell that’s also partly of their own making.

Packed with tension, shot with masterful skill and riveting from start to finish, GONE GIRL is a tour de force. However, the crude content, including many “f” words, is excessive. Also, the one bloody murder scene is over-the-top. This content, and the story’s dark characters, make GONE GIRL too excessive for media-wise viewers.