"Even Pain and Tragedy Has a Purpose" 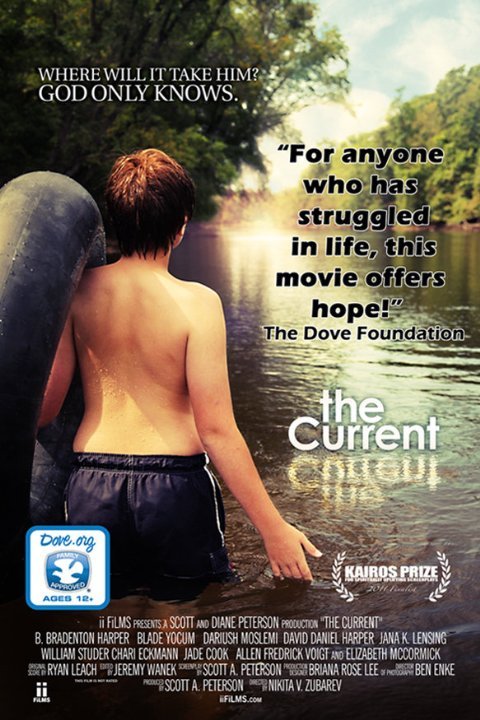 THE CURRENT begins in Chicago when a Christian family leaves the city to escape urban violence. The family moves to Providence River Campground in Minnesota as the new owners and campground management. The son, Jacob, hates the move and refuses to help out or do chores in retaliation for leaving the city. When he meets his neighbor Peter, the two become best friends. Peter, a firm Christian, shares the love and attitude of Christ with Jacob. Jacob and Peter get in and out of mischief. An unexpected tragedy strikes when Peter drowns in the river. The devastation is hard on Peter’s father and Jacob and his family. Peter’s father, Brian, pulls away from God, but Jacob draws nearer to Him.

A MOVIEGUIDE® Kairos Prize Finalist THE CURRENT tells a compelling, heartrending story. It has a strong Christian worldview full of redemptive moments and acts of reconciliation. Caution is warranted for older children due to the drowning incident and Jacob’s rebellion in the movie’s first half. Otherwise, however, THE CURRENT is a good movie with positive lessons fro both Christian and Non-Christians.

(CCC, BBB, V, N, M) Very strong Christian worldview full of prayer & reverence for God, Christian services at campground, with very strong moral/biblical worldview as boy learns to give and receive love, compassion, and friendship, plus reading of the Bible; no obscene or profane language; man with gun robs store and there’s a death by drowning; no sex; upper male nudity of boys swimming, and it’s implied boy shows his naked buttocks to other campers to “moon” them; no alcohol; no smoking or drugs; and, boy speaks disrespectfully to parent and disobeys, and a grieving widower and father temporarily distances himself from God and church.

THE CURRENT begins in Chicago with a Christian family deciding to leave the city because of violence. Their son, 13-year-old Jacob, is an avid Chicago Cubs fan and is completely opposed to the idea.

When they move to the Providence River Campground in Minnesota as the owners and camp management, Jacob is reluctant to help or do chores in retaliation. When he meets Peter, whose father owns a farm next to the campground, the two become the best of friends. Peter is a firm Christian who shares the love and attitude of Christ with Peter. When Jacob’s grandmother dies, Peter and his father, Brian, can relate since Peter just lost his mother two years ago.

Along the way, Jacob and Peter get in and out of mischief. One day, as Peter decides to swim in the River, but Jacob does not, the river’s current pulls Peter under water. Jacob struggles to help his friend but to no avail. He runs for help and goes to the bridge to look out just as Brian approaches the bridge to see his son’s body floating on the water. Jacob pulls his friend out, and others try to revive Peter, but to no avail.

Peter’s father, Brian, pulls away from God, but Jacob draws nearer to Him. Jacob does his chores willingly as well as Peter’s while Brian withdraws from God and everyone else because now both his wife and son are gone. Can Jacob’s new relationship with God help heal Brian’s anger and hurt?

A MOVIEGUIDE(r) Kairos Prize Finalist THE CURRENT tells a compelling, heartrending story. It has a strong Christina, moral worldview that’s full of redemptive moments and acts of reconciliation. That said, the scene where Peter drowns is too much for younger children. There’s also a scene implying Jacob pulls down his shorts to “moon” the other campers. However, Jacob’s father disciplines Jacob for his rebellious acting out.

THE CURRENT provides a great tool to help Christians and even Non-Christians see that God has a purpose and a plan for all the pain, trials and losses we experience in life. Interestingly, Jacob, who in the beginning wants little to do with church, is drawn to God by the losses he suffers. Eventually, he accepts God’s drawing and begins to come closer to Him. Jacob’s change is evident to all as he starts attending the Christian youth group Peter mentioned to him. He also does his chores and Peter’s chores without complaining or being asked. In time, God even gives Jacob, the “trickster” in the story, the right words to say to Brian to draw him back to Christ after he loses his wife and son.