"Trapped in No Man’s Land" 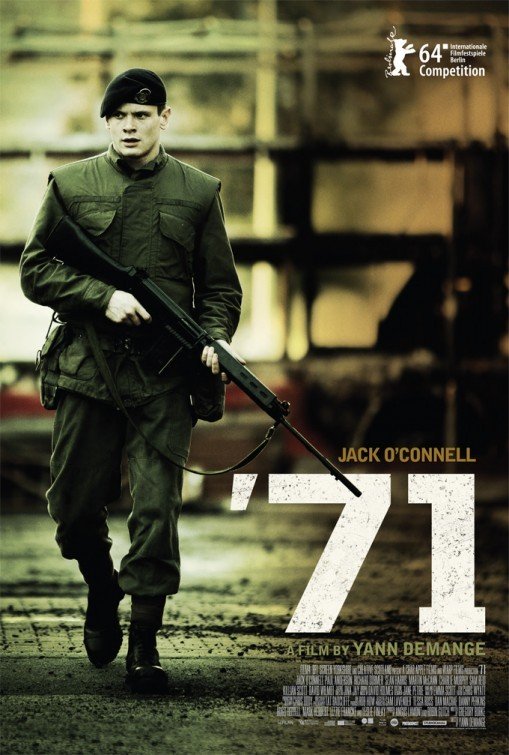 ’71 is a British movie about a soldier trapped in Roman Catholic territory in Northern Ireland in the 1970s. A young British soldier, Gary Hook, says goodbye to his brother in an orphanage as Gary goes to basic training. Shortly after basic training, Gary and his platoon get orders to go to Northern Ireland help stop the bitter fighting between Protestants and Catholics. On the first day, his platoon is sent to keep peace in one Catholic neighborhood, but the citizens heap abuse on them and throw stones. Gary barely escapes with his life as his platoon retreats. Now, Gary’s trapped in a strange neighborhood with no idea how to escape.

’71 is an excellent movie, despite having to understand some thick accents. It’s not always clear who’s who, or who’s doing what to whom, but that’s part of the problem for the movie’s hero, too. So, it’s part of the story. Though ’71 clearly has a moral worldview that’s ultimately anti-war, it still has some strong bloody violence. There’s also abundant use of the “f” word. So, extreme caution is advised.

(B, C, Ab, AP, LLL, VVV, N, A, D, MM) Light moral worldview with some minor Christian references, but story deals with conflict between Irish Catholics and Protestants in Ulster, Northern Ireland during the 1970s, plus several British undercover agents seem to be manipulating some things for their own selfish goals; at least 79 obscenities (mostly “f” words) and three strong profanities; some very strong and strong violence with blood includes man shot in face point blank, people shot, riot against British soldiers ends up with British soldiers being Britain, intense explosion in a pub, image of dead child from explosion, man has stomach wound being sewn up, character stabbed to death, gunfight, and helpful teenage boy tragically shot dead; no sexual content; rear male nudity; alcohol use; smoking; and, betrayal, corruption, hate.

Jack O’Connell, the actor from the MOVIEGUIDE® Award winning movie, UNBROKEN, stars in ’71, a British movie about a British soldier trapped in Roman Catholic territory during the bitter, violent conflict between Catholics and Protestants in Northern Ireland in the 1970s. ’71 is an intense, riveting movie about political and religious conflict, but there’s a lot of strong foul language and some strong violence.

The movie begins with the young British soldier, Gary Hook, saying goodbye to his kid brother in an orphanage as Gary goes off to basic training. Shortly after basic training, Gary and his platoon get orders to go to Northern Ireland to help stop the bitter fighting between Protestants and Catholics.

On the first day practically, his platoon is sent out to keep peace in one Catholic neighborhood, but the citizens heap abuse on them and start throwing stones. Gary and another soldier get separated from the unit, and a gang of Catholics starts beating up on them. At one point, an angry IRA member shoots the other soldier dead in cold blood, while Gary escapes with his life.

Now, Gary’s trapped in a strange neighborhood with no idea how to get out. Meanwhile, the IRA comes looking for Gary to finish him off, because he’s an eyewitness. A young Protestant boy tries to help Gary, but Gary learns that some undercover British soldiers have sold a bomb to the Protestant faction. The Protestant faction accidentally sets off the bomb, killing the boy and seriously wounding Gary.

Gary gets help from a Catholic man and his pretty adult daughter, who take him to their apartment. They tend to his wounds, but the IRA is still searching for him. Meanwhile, Gary’s fellow soldiers try to mount a rescue attempt; if, that is, Gary is still alive and can keep alive.

’71 is an excellent movie, despite a problem trying to understand the thick Irish and British accents. It’s not always clear who is who, or who is trying to do what to whom, but that’s part of the plot problem for the movie’s hero, Gary, who’s like a fish out of water. So, it’s also part of the story.

Though ’71 clearly has a moral worldview that’s ultimately anti-war, it still has some very strong violence. There’s also abundant use of the “f” word. Finally, a couple bad guys get away, and several characters lose their lives in senseless acts of violence. Of course, that’s also part of the story’s message about the immorality of such violent conflicts as the strife in Northern Ireland, and man’s inhumanity toward man. That said, MOVIEGUIDE® advises extreme caution for ‘71.