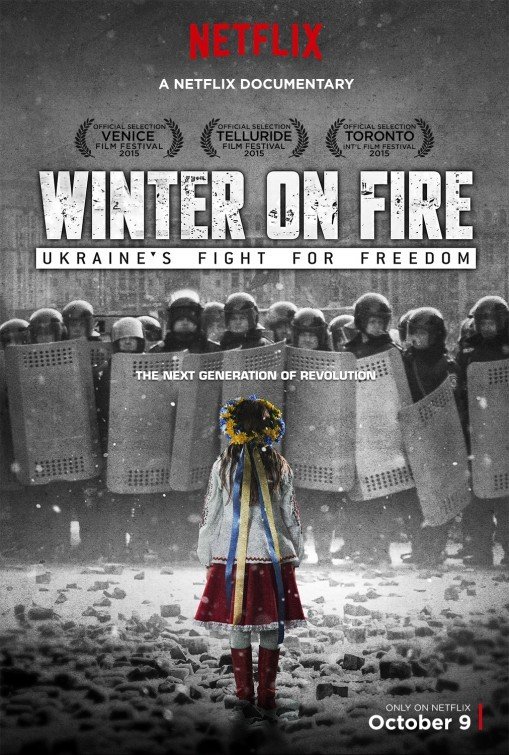 WINTER ON FIRE is about the protests for freedom in Ukraine in 2013 and 2014, after a newly elected communist president decides to move the country away from Europe’s influence and back to Russia’s. When the new communist president breaks off talks with Europe, many young people gather in the major town square, which is dedicated to freedom, to protest. One division of the police force starts to beat these young people, including young women. Citizens who are used to being apolitical are outraged. So, the protest grows.

Like almost any documentary, WINTER ON FIRE is too linear and often too repetitive. It doesn’t have the power of drama. Also, Ukraine is made up of a lot of different nationalities, so the issues there are hard to solve. Finally, the European Union is just another form of socialist tyranny, with a sinister happy face. That said, WINTER ON FIRE is worth watching and it defends Christian principles of republican government. There is, however, some foul language, strong violence and nudity when the police humiliate one male protester. So, extreme caution is advised.

(CC, BB, ACAC, P, LL, VV, NNN, A, D, M) Strong Christian worldview about standing against some government tyranny, with lots of Orthodox Christian symbols, clergy, prayers, and lots of statements that this is not a political movement but a movement for freedom, some hyper-revolutionary zeal and provocateurs; about 10 obscenities and no profanities; lots of scenes of violence, including bloody faces, bloodied eyes, bodies blown up, beatings, battles, constant fighting; no sex; full male nudity when the police strip a protestor and parade him around to humiliate him; alcohol; smoking; and, government lying, cheating, tyranny.

WINTER ON FIRE is almost a real-life, documentary representation of the major issues in HUNGER GAMES. That is, after a few years of freedom, after the collapse of the Soviet Empire, a communist is elected president of Ukraine and starts to move Ukraine away from Europe and back to Russia. When the people protest, a 90-day battle of civil disobedience escalates in Kiev, from November 2013 to February 20, 2014. Like THE HUNGER GAMES, the people want freedom, but they don’t understand that the European Union will impose its own immoral and draconian economic conditions on membership.

Be that as it may, when the new communist president breaks off talks with Europe, many young people gather in the major town square, which is dedicated to freedom, to protest. One division of the police force starts to beat these young people, including young women.

Citizens who are used to being apolitical are outraged. So, the protest grows. The major protest consists of younger people, priests and others who want freedom in Ukraine. While the police are unnecessarily cruel in their beatings, it seems that a few provocateurs join the protest just to increase the enmity. In response, the police recruit criminals who can inflict more pain on the protesters than the police can. Everything escalates, until people are shot, and the country’s future is on serious doubt.

Since WINTER ON FIRE is a historical documentary, most people who follow the news already know the ending. That said, the issues aren’t clearly back and white. The communist leader needs to be removed, but the European Union is just another form of socialism, with a sinister happy face. This is very similar to the situation Katniss faces in opposing Pres. Snow, although this time it’s a real-life battle.

Having spoken in the beautiful city of Kiev several times, it’s heartbreaking to see how quickly a city can be destroyed by the ravages of civil war. It’s also interesting to note that most of the protestors are Christian, and they make three key demands calling for a republican form of government. Included in those demands are separation of powers, new elections and reinstatement of life, liberty and property.

Since the documentary covers 90 days, there are some people in it who use obscenity briefly. There are also many scenes of bloody battles. Some are quite scary because they are in the middle of the violence via handheld cameras.

Like almost any documentary, WINTER ON FIRE is too linear and often too repetitive. It doesn’t have the power of drama.

Ukraine is made up of a lot of different nationalities, so the issues there aren’t going to be easily solved by people who think there’s a simple answer. Even so, WINTER ON FIRE is worth watching.