"Don’t Go All In with This Game" 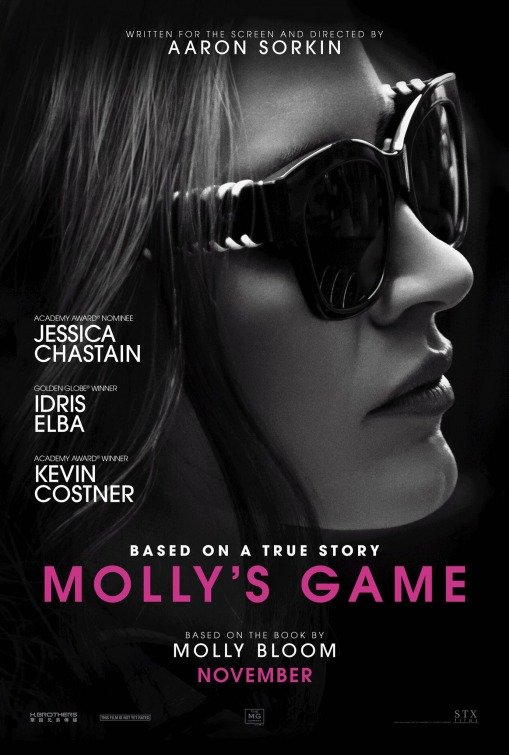 MOLLY’S GAME is a true crime drama starring Jessica Chastain and Idris Elba about Molly Bloom. A young woman, Molly ran high-stakes underground poker games that attracted high-profile Hollywood stars and wealthy criminals and eventually got her into trouble with the law. The FBI arrests Molly to leverage her confiscated money and her freedom to force her to hand over sensitive information that could put away criminals, and ruin the lives of some innocent people. Molly hires a fancy, straight-laced lawyer to help. She tells him her story of going from a cocktail waitress to running underground poker games.

MOLLY’S GAME has fast paced, witty dialogue, but a slow-moving plot and mixed worldview. On one hand, Molly sincerely cares about other people. On the other hand, her obsession with growing her poker games consumes her life and doesn’t align with biblical priorities. Molly’s resilience throughout her story is impressive, but it’s filled with so much bleakness that it’s not uplifting. Also, MOLLY’S GAME has abundant foul language, Molly often wears skimpy outfits, and there’s excessive substance abuse. So, MOVIEGUIDE® advises extreme caution.

Dominant Worldview and Other Worldview Content/Elements:
Strong, slightly mixed, pagan worldview about obsession for power and pursuing success in excessive ways, with light moral elements of being decent to people, having a good reputation, trying to keep the law, and family reconciliation.
Foul Language:
At least 34 obscenities (including 22 “f” words) and two profanities.
Violence:
Strong violence includes scene where main character is assaulted in her apartment (her head is smashed against a wall, she’s smacked and her head is hit with the base of a gun), and an intense skiing accident is shown.
Sex:
No real sexual content, but some references to adultery and fornication.
Nudity:
No explicit nudity, but female protagonist wears many cleavage bearing dresses, there’s quick shot of her back in the shower, and some women are very briefly shown in their underwear.
Alcohol Use:
Heavy drinking.
Smoking and/or Drug Use and Abuse:
Heavy drug use.
Miscellaneous Immorality:
Excessive gambling and greed.

MOLLY’S GAME is a crime drama starring Jessica Chastain and Idris Elba about the real life Molly Bloom, a young woman who ran high-stake underground poker games that attracted high-profile Hollywood stars and wealthy criminals and eventually got her into trouble with the law. MOLLY’S GAME is well written, but with mediocre direction and a strong pagan worldview that contains plenty of strong foul language and other objectionable content.

Playing Molly, Jessica Chastain narrates much of the story. She begins by explaining her childhood as a competitive mogul skier and her very demanding psychiatrist father (Kevin Costner). While competing to make the Olympics, Molly suffers a terrible crash that takes her out of the competition.

Cut to years later. The FBI arrests Molly for her previous involvement in underground poker games and the criminals that came to play poker. Told to show up in New York City in two days with a lawyer, Molly finds attorney Charlie Jaffey (Idris Elba), a “by the book” straight-laced, expensive lawyer. Molly has no money, since the government confiscated all of it two years before, so she has nothing to offer Charlie. On a whim, however, Charlie takes her case. After Molly had been busted by the government, she wrote a book detailing her life running underground poker games with high-profile people, but Charlie tells her he needs to hear her full story with no details left out.

Molly explains that, after her ski competition crash, she moved away from her family and lived in Los Angeles for a time, planning to go to law school. In Los Angeles, Molly worked waitressing jobs and eventually landed a gig working as a personal assistant for Dean, a mean real estate agent. Dean also ran an underground poker game that included some A-list Hollywood actors, directors and other wealthy businessmen. Dean made Molly the hostess of the poker game. Knowing nothing about poker, Molly watched everything very intently and began learning the ins and outs of poker and gambling. At the end of her first night of poker, Molly made $3,000 in tips.

It doesn’t take long before Molly and Dean don’t work well together. So, Molly takes everything she learned by hosting the poker games, steals all the players from Dean and hosts her own underground poker. This works out well for a time, but eventually all the players leave her.

Not wanting to give up, Molly moves to New York City, where she starts from scratch. She hires some high-end prostitutes to get the word out to their super wealthy clients about a new poker room she’s running. It doesn’t take long before her games are highly coveted. All the while, Molly chooses to do everything legally. She doesn’t charge players to be there, she doesn’t skim from the table, and for those who can’t afford to pay money they owe, Molly doesn’t have “muscle” go after them. Molly actually tries to look out for the players that come in to play poker.

However, keeping this up eventually pushes Molly into drug use and addiction. Also, when the stakes get really high, she begins skimming from the table illegally. When the Russian mob find their way at her table and her personal sanity begins to suffer, the FBI storms in and confiscates everything Molly owns.

Back to the present, Molly and her lawyer Charlie start working on her defense. The government doesn’t care as much about her activities as much as they do about the criminals who came to her poker matches. If she testifies against the Russian mafia, and hands over sensitive information about all her former clients, which could ruin their lives, they’ll take away the charges. However, Molly refuses, which gives Charlie a big challenge.

MOLLY’S GAME has fast paced and witty dialogue, but a slow moving plot. Acclaimed writer Aaron Sorkin wrote the movie, and made it his directorial debut. The events of Molly Bloom’s fascinating life are all over the place, and Sorkin skillfully creates a narrative that keeps it interesting. Sorkin is adamant in telling a feminist story about a strong women, who holds power over powerful men and has no need for romantic entanglements. The problem with this is that, by the end, it’s hard to relate with Molly, who seldom shows any appealing qualities. At a certain point, her estranged father shows up, and there’s a scene of reconciliation showing a more tender side of Molly, who only ever wanted was a father that loved her. Sorkin’s mediocre direction includes too many long-winded conversations that slow down the pacing of the movie.

MOLLY’S GAME has a mixed worldview. On one hand, Molly sincerely cares about people and really tries to do things legally (though she makes mistakes). However, on the other hand, her obsession with growing her poker games consumes her life and doesn’t align with biblical priorities. While Molly’s resilience by the end of the movie is impressive, it’s filled with so much bleakness, it’s not uplifting. Finally, MOLLY’S GAME has abundant foul language and substance abuse, and Molly wears skimpy outfits throughout, so extreme caution is advised.