THE OTHER SIDE OF HEAVEN 2 FIRE OF FAITH

"An Inside Look into Mormon Missionary Life" 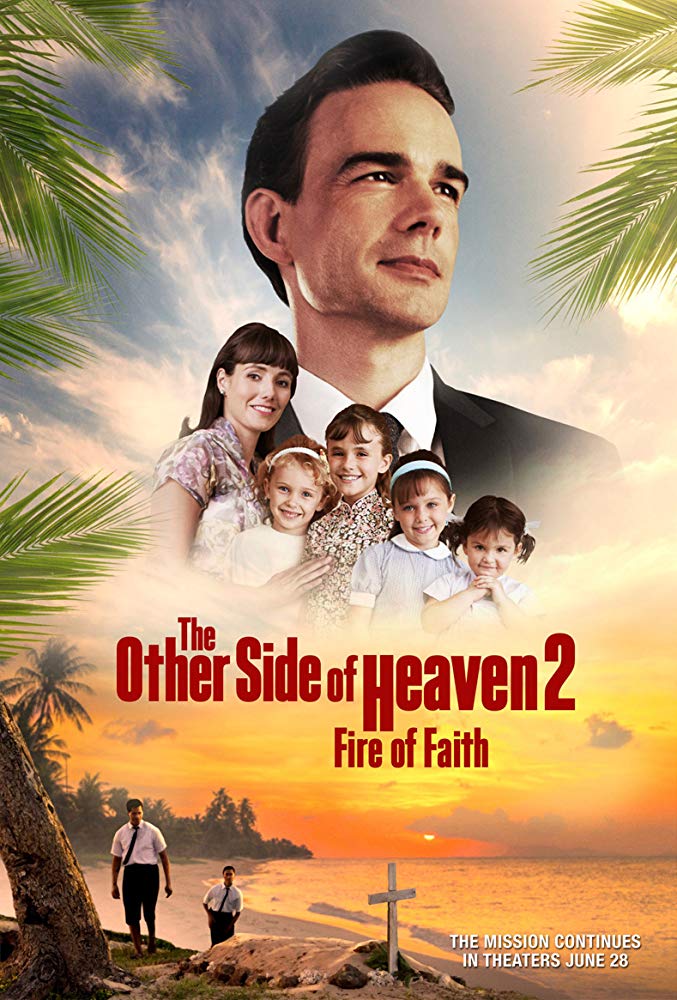 THE OTHER SIDE OF HEAVEN 2: FIRE OF FAITH is the story of John Groberg, a Mormon missionary who, with his wife, Jean, served in several missions throughout the South Pacific e. In 1965, John receives the order to be a Mormon missionary in Tonga and preside over other missionaries. Meanwhile, a Christian minister’s two sons in Tonga convert to Mormonism, much to their father’s disdain. The movie shows John teaching the Christian minister about the Mormon faith.

THE OTHER SIDE OF HEAVEN 2: FIRE OF FAITH is designed for family audiences. The leads playing the Mormon missionary and his wife are very good. The cinematography is good. It’s enhanced by the beautiful location on Fiji. FIRE OF FAITH is clean and has the outward appearance of godly values, but it also contains some false values and teachings. For example, it is said that God helps those who help themselves and that the deceitful founder of Mormonism, Joseph Smith, was appointed a prophet by Jesus Himself. THE OTHER SIDE OF HEAVEN 2 is not recommended for families or people of real Christian faith.

(FRFRFR, C, B, V, A M) Very strong, false Mormon worldview includes an indigenous Christian minister and his two sons being taken from True Christianity and true faith in the true Jesus into Mormonism, the Mormon charlatan Joseph Smith is said to be appointed a prophet by Jesus (that’s the only time Jesus is mentioned), and it is said that God helps those who help themselves, but trusting in God no matter what is also encouraged and people are shown praying and saying things like, “Thanks be to God!” (but what god?)
Foul Language:
No obscenities or profanities
Violence:
Light violence includes a spouse grabbing his wife by the arm, a character hits himself against an open door and then falling onto the floor, one scene of a character being beaten for his Mormon faith
Sex:
No sex (married coupe kisses)
Nudity:
No nudity
Alcohol Use:
One scene of drinking
Smoking and/or Drug Use and Abuse:
No smoking or drugs; and,
Miscellaneous Immorality:
A Christian father declares his son is dead to him because the son converted to Mormonism.

THE OTHER SIDE OF HEAVEN 2: FIRE OF FAITH is the story of John Groberg, a Mormon missionary who, with his wife Jean, served in several missions throughout the South Pacific, South America and Asia.

Beginning in Idaho Falls in 1965, John and his wife, Jean, who’s pregnant with their fifth child, receives his order to be a Mormon missionary in Tonga for three years and preside over hundreds of other missionaries. Meanwhile, a Christian minister’s son in Tonga, Toutai Paletu’a, converts to Mormonism, much to his father’s hatred. Cast aside and disowned, Toutai struggles to find his way in his newfound faith. When a storm takes his son’s life, the father faces his own struggles of faith in the midst of death.

Soon, John visits their island, looking to spread Mormonism to whomever he meets and even poised to build a chapel on the island. He faces many trials, including a potential shipwreck where he loses his daughter. However, through prayer, he asks God to spare his daughter and by a miracle, the daughter, and Elder Latu are spared. At this point. John meets Toutai’s Christian father, Sione, steeped in the grief of losing his son. John tries to comfort him, but to no avail.

A few years later, Sione learns his other son has also become a Mormon minister. Beside himself with anger, he goes to find his son where he’s ministering in Samoa. When Jean gives birth to another son, she and John soon realize their son is facing the trial of their lives. Instead of harboring a grudge against the Mormon faith that made him angry at his deceased son, Sione and John’s family bond together over their trials and the two help each other know Mormon theology. John returns the favor when he is there for Sione when his other son, Latu, is beaten for his Mormon faith. John prays a blessing onto Latu and he’s miraculously healed, through the prayers of Sione’s church members.

THE OTHER SIDE OF HEAVEN 2: FIRE OF FAITH is designed for family audiences. The performances by the two leads playing the Mormon missionary, John, and his wife, Jean, are very good. The cinematography is also very good. It’s enhanced by the beautiful location on Fiji.

Although FIRE OF FAITH is clean and has the outward appearance of godly values, it also contains some false values. In one scene a man says, “God helps those who help themselves.” There are also several scenes of baptisms, which although Christians practice, do not believe this is a tool for salvation, but rather a public declaration of an inward acknowledgment of Christ’s atonement on the cross. Conversely, Mormons only believe in Mormon baptism for salvation. It isn’t explicitly stated baptism is necessary for salvation, but the several scenes of new believers getting baptized gives off this impression. Even worse, Jesus is mentioned in only one scene, where it’s said that the founder of Mormonism, Joseph Smith, received his words from Jesus and is a prophet appointed by Jesus. In reality, it’s been proven historically that the founder of Mormonism was a heretical charlatan who taught a Jesus and a triune god different from the Jesus and the Holy Trinity of the new Testament documents. Finally, the movie shows the Mormon missionaries taking Christian believers away from the true faith of the New Testament and into the heretical darkness that is the Mormon Church.