"Timely and Realistic but Flawed" 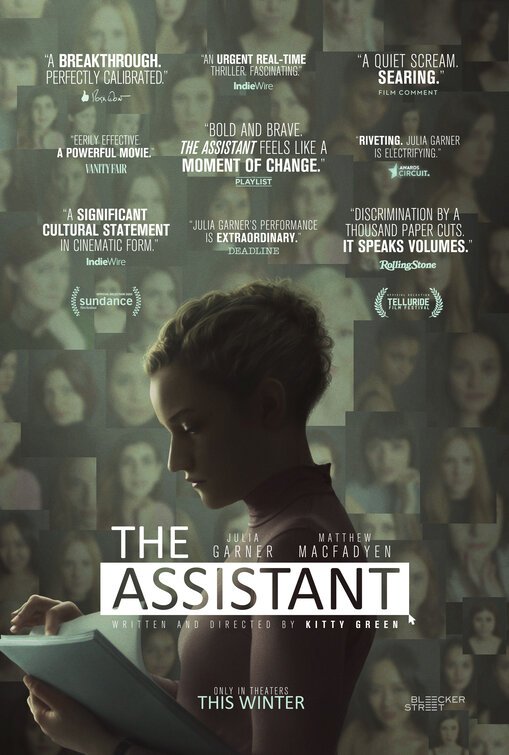 THE ASSISTANT follows Jane as she begins another day at a major film production office in New York City. She’s the first one in to work and one of the last out. Jane finds herself in the middle of her married boss’s personal affairs multiple times, while making the mistake of having morals in the entertainment industry. She sees the way her boss takes advantage of young women who have dreams of making it in the movie business. However, when she tries to report his behavior, it comes back to bite her.

THE ASSISTANT tells a story that’s very timely and prevalent in today’s world. Every day the news tells a story just like this, where someone in power takes advantage of other people. THE ASSISTANT has a slow and not extremely eventful storyline, but it tells the story in a very credible way. The sexual content is mostly implied. The foul language is kept to a minimum. The immorality is shown to be wrong. However, MOVIEGUIDE® advises extreme caution for the adult subject matter and several strong obscenities in THE ASSISTANT.

(BB, Pa, LL, S, D, M):
Dominant Worldview and Other Worldview Content/Elements:
Main character exhibits strong moral character and reports some misconduct that she witnesses, but she’s shut down by her superiors as they ignore the wrongdoings of the boss because he’s a powerful man
Foul Language:
10 obscenities (including four “f” words) and two profanities
Violence:
No violence
Sex:
Implied fornication and adultery such as an earring found in a married man’s office and one scene where some implied sexual movement is seen through window blinds
Nudity:
No nudity
Alcohol Use:
No alcohol use
Smoking and/or Drug Use and Abuse:
One scene involving a cigarette and no illegal drugs, but prescription drugs are shown being stocked and a crushed pill is shown being thrown in the trash;
Miscellaneous Immorality:
Examples of corruption within a workplace and “quid pro quo” where a powerful man uses his position to have his way with many women although he’s married.

THE ASSISTANT shows a day in the life of Jane, the newest assistant in the office at a big-time movie production company, who discovers her boss is abusing his power to cheat on his wife and take advantage of younger women.

The movie begins as Jane begins her day. She leaves her home before the sun is up, being the first one of her coworkers to arrive. She turns on all the lights and computers, and makes herself some coffee to warm up for the day. She scarfs down some cereal as she hears others enter the building. She cleans up the office of her boss, picking up an earring off the floor by the couch. Her fellow assistants also start their arrival, one of them informing her of her first official duty for the day. She begins printing the first of many copies that she will make throughout the day.

Jane is the soldier on the frontlines in this office, dealing with the things that no one wants to do, including the boss’s wife. She stumbles through the conversation as she attempts to calm down the boss’s wife as she screams about her credit cards not working. After hardly saying anything, she almost immediately receives a phone call from “him.” His voice can be heard through the phone line screaming at her for the conversation with his wife. After hanging up, she begins an apology email to him. Her fellow assistant comes up behind her reading what she’s typing. He advises her on some of her phrasing, telling her to be sure to put how grateful she’s for the opportunity to work for him and that she won’t let him down again.

Jane continues with her day, getting water for the guests and printing out the actor headshot choices for the executives. She opens the mail, unpacking boxes of alprostadil and prescription medication that she stocks into the desk drawer of her boss. The earring that she found on the floor is retrieved by a young girl who looked humiliated to be getting it.

Soon, Jane is told that the new assistant has arrived. Not knowing anything about this, she sees a young and beautiful girl with a suitcase having just arrived. She’s informed that this girl will be the new assistant and is being put up at a fancy hotel nearby. While Jane takes her there, she learns that she’s from Idaho, and she met their boss at a convention in Sun Valley, where she was a waitress.

Upon returning to the office, Jane feels conflicted. She steps into the office of human resources, and tries her best to explain the situation. She expresses that there is a new assistant who is very young and pretty, with only waitress experience, who is being put up by their boss at a hotel. She also mentions the earring she found, as well as a woman’s hair tie the week before, and how other executives were joking about the boss’s whereabouts.

Although to her it seems like a clear situation, the man in HR makes it pretty clear to her that she would be seriously jeopardizing her career if she were to make this report. She agrees not to file it and returns quietly to her desk, where she soon receives another screaming phone call from the boss. After hanging up, the other assistants both come over to help her write a new apology email. Jane is realizing the truth of the situation may be the truth of this world.

THE ASSISTANT is told in a very quiet way, without much dialogue throughout the entire story. Jane does her duties with little to say about them, because she aspires to be a movie producer one day. Although there is no significant action or major event, the story shows a day that many people have seen before. Employees turn a blind eye, executives make jokes about it, and the man in charge continues to abuse the power he has.

The style of this movie won’t appeal to everyone, as it is a more “slice of life” movie, and nothing extremely exciting happens. However, it does show the way that companies need to change, and how the attitudes towards the actions of people with power seriously needs a shift. It’s told with minimal questionable content, with about 10 obscenities and no explicit sexual content. However, because the subject matter is mature, and there are a few “f” words, MOVIEGUIDE® advises strong and extreme caution, especially for younger moviegoers.