"More to Life than Good Grades and Career" 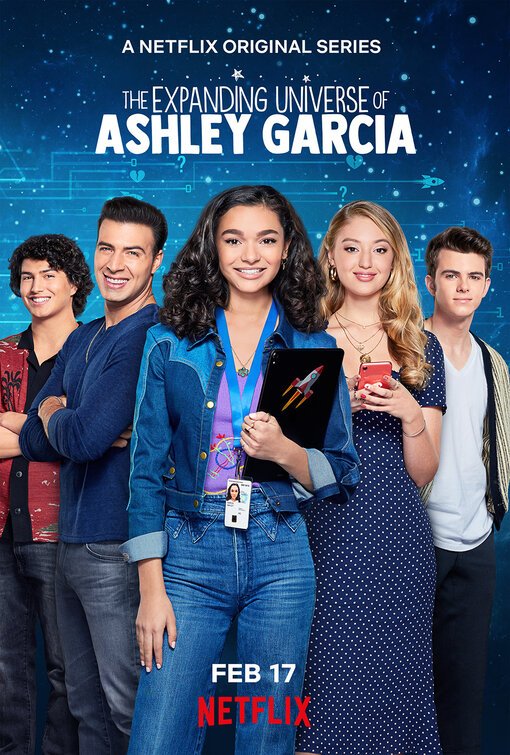 “Breath Mint” is the first episode of THE EXPANDING UNIVERSE OF ASHLEY GARCIA, a new comedy series on Netflix. Fifteen-year-old Ashley has a Ph.D. from MIT and goes to work for NASA at the Jet Propulsion Lab in Pasadena, California. She movies in with her uncle, a high school football coach and former NFL player. Ashley wants a normal life, including a chance to get her first kiss with a boy. She gets help from her friend, Brooke, in meeting new friends, including boys on her uncle’s football team at the local high school.

“Breath Mint” is entertaining and offers lots of comedy. The episode contains a romantic message that there’s more to life than just good grades and career. It has some strong elements of friendship and family. However, there are a couple jokes about Ashley’s “controlling” mother, though Ashley and her mother have a scene of reconciliation at the end. Also, there are a few jokes that are too advanced for children and young teenagers. So, viewers should proceed with caution regarding this first EXPANDING UNIVERSE OF ASHLEY GARCIA episode.

(B, C, L, S, N, A):
Dominant Worldview and Other Worldview Content/Elements:
Light moral, redemptive worldview where a character reconciles with her mother, spends time with her uncle, and makes new friendships
Foul Language:
One light profanity
Violence:
No Violence
Sex:
Adults kiss and imply they should “go upstairs” and teenage girl wants to get her first kiss
Nudity:
No nudity but a woman is shown only wearing a football jersey
Alcohol Use:
Adults drink wine
Smoking and/or Drug Use and Abuse:
No smoking or drugs shown; and,
Miscellaneous Immorality:
Nothing else objectionable.

THE EXPANDING UNIVERSE OF ASHLEY GARCIA is a new comedy series from Netflix about a 15-year-old girl with a science doctorate who goes to work for NASA in Pasadena and lives with her uncle, a high school coach who used to play professional football.

In “Breath Mint,” the first episode, Ashley has just moved to Pasadena to live with her uncle. Despite having a Ph.D. and working for NASA at JPL, the Jet Propulsion Lab, Ashley searches for a regular teenage life with a girl squad, football games and dating. “Breath Mint” is entertaining and really funny, but there are a few jokes that are too advanced for children and young teenagers.

The episode starts with Ashley explaining her life story for a video on her computer. She explains that she’s already graduated from MIT with a Ph.D. and has been offered a job at JPL in California. Ashley states she’ll move in with her uncle in Pasadena, who is a high school football coach and retired NFL player.

Ashley arrives in California, but her mother is skeptical of her being in the hands of her playboy uncle. The next morning, Ashley wakes up on the couch to five football players standing around her. They tell Ashley that her uncle lets them use the pool and train at his house. Stick, the equipment manager, and a charming teenage boy named Tad introduce themselves to Ashley. Stick becomes one of Ashley’s friends, and she develops a crush on Tad.

The next day Ashley meets up with a longtime friend named Brooke. Brooke is very outgoing and is a fashionista. Ashley reveals to Brooke that she’s never kissed anyone, and they develop a plan for Ashley to kiss someone. Brooke gives Ashley guidelines such as when someone takes a breath mint, they are going to kiss you. Afterwards, Ashley tells her she wants Tad to be her first kiss, but Brooke thinks it’s a bad idea because Tad “plays the field” and the two get in a fight.

Ashley goes home upset. However, her uncle asks her if she can tutor Tad in algebra so he can pass his test for the next football game. Ashley agrees, and during the tutoring session Tad takes a breath mint. Ashley confuses the breath mint as a signal that Tad wants to kiss her, but when she tries to kiss him, he backs away and is caught off guard. Although the two share an awkward moment, he says hi to Ashley the next day at the coffee shop. Also, Ashley and Brooke reconcile and create a new plan for Ashley to meet boys.

“Breath Mint” is entertaining and offers lots of comedy. The episode has some strong elements of friendship and family. However, there are a couple jokes about Ashley’s “controlling” mother, though Ashley and her mother have a scene of reconciliation at the end. Also, there are a few jokes that are too advanced for children and young teenagers. For example, Ashley’s uncle has a girlfriend stay over one night, and the woman says they better go upstairs to “make sure everything fits.” Later, the woman comes downstairs wearing only a large football jersey. So, viewers should proceed with caution.