"Too Scary and Occult for Children" 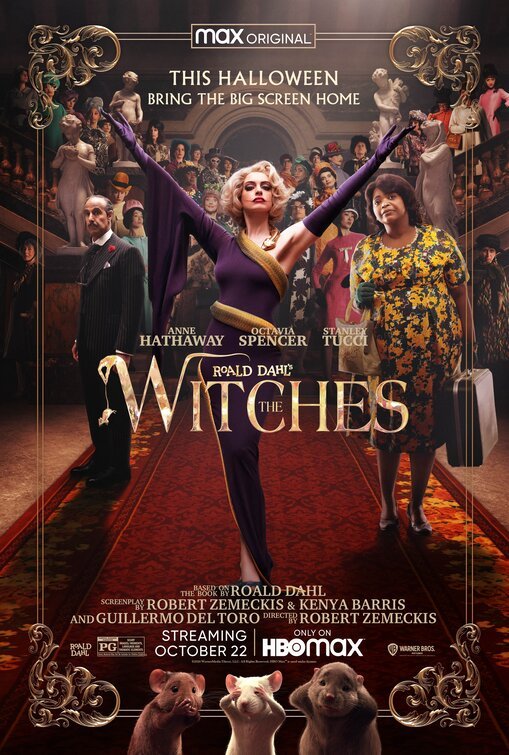 THE WITCHES follows a young orphan boy who travels with his grandma to seek safety from witches who want to kill children. To escape from the clutches of the town witch, grandma and the Boy travel to a fancy hotel in Alabama, their state of residency. Unhappily for them, the witches and their leader, the Grand High Witch, are in town too and staying at the same hotel! The witches plan to turn all the children in the area into mice so that they can squish them. What will they have to do to outrun these horrible witches and stop their evil plan?

Based on Roald Dahl’s acclaimed comic novel, THE WITCHES is entertaining with a great seasoned cast. However, the movie’s light moral, redemptive tale of Good versus Evil has strong occult content involving witchcraft, references to demons and some pagan healing elements. Despite a few positives reference to God, THE WITCHES is too scary for children. For example, the witches are very creepy. So, MOVIEGUIDE® advises that the movie is excessive for these elements and violent scenes containing obvious computer graphics.

(B, C, OO, PaPa, C, B, L, VV, N, A, M):
Dominant Worldview and Other Worldview Content/Elements:
Light moral, redemptive worldview where characters try to overcome evil witches, one grandma says love will always win and a few positive references to God and His almighty plans, marred by strong, scary occult elements with evil witches gathering together, demons, potions, witches place a curse on a grandma, and a character stays in Room 666 at a hotel, plus elements of occult paganism where a woman is a healing priestess who uses potion making to help the good guys escape the clutches of the evil witches
Foul Language:
No obscenities but one “for God’s sake” profanity, one “So help me God” and one “crap;”
Violence:
Some scary violence includes a witch is depicted posing as a nurse with a syringe in her hand, witches turn children into mice so they can squish them (no child gets squished, however), witch angrily throws two pieces of furniture across a room, and they shatter, the same witch kills a fellow witch with laser powers that shoot from her claws, chef makes a trite comment about killing himself when his dish doesn’t go as planned
Sex:
No sex
Nudity:
Upper male nudity when a boy is shown in a bath
Alcohol Use:
Woman has a cocktail
Smoking and/or Drug Use and Abuse:
No smoking or drugs; and,
Miscellaneous Immorality:
Deception, name-calling.

THE WITCHES follows a young orphan boy who travels with his grandma to seek safety from witches who want to kill children, but who run into a cabal of witches in the same hotel where they’re staying. THE WITCHES is very well made, with an excellent cast, but its light moral, redemptive worldview of Good versus Evil is marred by strong occult content featuring scary witches, references to demons, and some violence, so the movie is excessive.

THE WITCHES begins with narration from a now grown up version of the Boy on screen who’s unnamed throughout the whole movie, which takes place in 1967. After his parents died in a car accident, the lives with his maternal grandma who hopes to lift his spirits. While at the grocery store one day, the Boy encounters a witch with a snake on her person, and then she suddenly disappears. When the Boy tells his grandma what happened, she tells him the truth: witches are real; and, they live among humans. Most importantly though, the witches hate children and want to squish them all!

To escape from the clutches of the town witch, grandma and the Boy travel to a fancy hotel in their state of residency Alabama. Unhappily for them, the witches and their leader, the Grand High Witch, are in town too and staying at the same hotel!

While the Boy tries to train his pet mouse, Lazy, the whole lot of witches comes into the ballroom where they’re practicing! Quickly, the Boy and Lazy hide, but from their hiding place they’re able to confirm that the witches’ physical appearances match that of his grandmother’s description. Apparently, the Grand High Witch gave another young boy, Bruno, a delectable chocolate bar upon checking in to the hotel, but it was laced with a potion that will turn him into a mouse so she can squash him! Bruno comes into the very ballroom where the witches are having their meeting, only to transform into a mouse shortly thereafter.

The Boy comes out of hiding to try to help, but the Grand High Witch puts her potion in his ear, and he also becomes a mouse! Thankfully, Lazy the pet mouse knows what to do, because she tells her new mice friends that she was also a child who got turned into a mouse. The three friends escape to the Boy’s grandmother’s hotel room in order to hatch a plan to defeat the witches from hurting the children in the tri-state area.

But, will their plan prevail?

THE WITCHES is entertaining with a great seasoned cast. Major Hollywood filmmakers like Alfonso Cuaron (GRAVITY) and Guillermo del Toro (PAN’S LABRYINTH) contributed to the project, which is spearheaded by Robert Zemeckis, who also directed CAST AWAY, FORREST GUMP and BACK TO THE FUTURE.

However, the movie’s light moral, redemptive tale of Good versus Evil has strong occult content involving witchcraft, references to demons and some pagan healing elements. Aside from a positive reference to God, THE WITCHES is too scary for children. For example, the witches are very creepy. So, MOVIEGUIDE® advises that the movie is excessive for these elements and some violent scenes containing some obvious computer graphics.

God warns us to stay away from things of an occult nature. From Pharaoh and his sorcerers to the witch of Endor, God’s word expressly tells us that “Anyone who does these things is detestable to the Lord” (Deut 18:12).