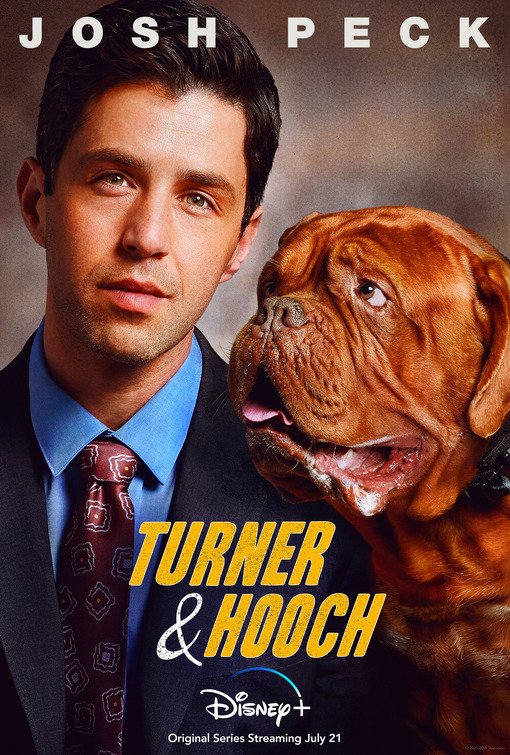 TURNER & HOOCH: “A Good Day to Dog Hard” on Disney Plus continues the adventures of Scott Turner and his slobbering K-9 partner, Hooch. Turner and Hooch are stuck babysitting Kaya, the daughter of an Olympic Committee Chairman. Terrorists take over the hotel where Turner is guarding Kaya. They take the hotel staff, the Olympic committee and two of Turner’s marshal friends hostage. While trying to protect Kaya, Turner and Hooch need to stop the terrorists and get everyone out safely. Turner relies on Hooch’s “playing” to his advantage.

“A Good Day to Dog Hard” has a simple but effective plot that spoofs the DIE HARD movies with Bruce Willis. The themes introduced in the first episode are brought back. For example, good triumphs over evil, Turner doesn’t need to kill someone to stop them, and love, family bonds and treating animals with kindness are extolled. All this makes for an exciting combination of excitement, comedy, suspense, and heart. There’s still some outlandish gun violence and martial arts fighting in “A Good Day to Dog Hard.” So, MOVIEGUIDE® advises caution for older children.

(BB, E, VV, M):
Dominant Worldview and Other Worldview Content/Elements:
Strong moral worldview with a clear distinction between good and evil, the good guys triumph over evildoers, there is pro-life representative in the lead title character’s female partner, the family unit is supported (the lead title character’s family is willing to support and love each other), plus another character is a nature lover who talks about the bad effect of zip ties on the environment
Foul Language:
No obscenities or profanities, but there’s a reference to the term “Yippie Kay Yay, MF,” used in the DIE HARD movies, but the phrase is never actually said
Violence:
Some gun violence used during confrontations with the Marshals and the villains, some martial attacks used during the hostage situations by the Marshals against the terrorists, the terrorists beating up Xavier, with a small amount of blood shown, like Xavier’s split lip and the cut on Turner’s foot
Sex:
No sex
Nudity:
Cop spends a good portion of the episode in a male undershirt, like the Bruce Willis character in the original DIE HARD movie
Alcohol Use:
No alcohol use
Smoking and/or Drug Use and Abuse:
No smoking or drugs; and,
Miscellaneous Immorality:
Terrorists hold people hostage, a picture of Hooch the dog’s behind gets used as a meme, and Hooch slobbers half the episode, along with the constant ‘Kissy-Face’ gag.

OVERVIEW REVIEW: A new adventure comes for Scott Turner and his dog Hooch as the two now must overcome a “Die Hard” situation. In “A Good Day to Dog Hard” on Disney+, Turner and Hooch, along with two other Marshals, Xavier Watkins and Jessica Baxter, are given the short end of the stick when a case regarding the Olympic Committee comes their way. The deputy in charge, Trent Havelock, and his gang of Alpha dog macho men try to take all the glory by going where they think the action is going to be. This leaves Turner and Hooch babysitting the Olympic Committee Chairman’s daughter, Kaya. However, Trent’s “A Squad,” as he likes to put it, leaves the hotel to go handle a potential terrorist attack elsewhere. This leaves Turner, Xavier and Jessica guarding the hotel almost defenseless.

When the terrorists make their move, they take the entire hotel staff, the Olympic Committee, Xavier, and Jessica hostage. This leaves the rescue totally in the hands of Turner, Hooch and Kaya. Through shenanigans, heavily inspired by the classic movie DIE HARD, and Hooch’s version of playing, Turner can perhaps gain the upper hand and save all the hostages without killing a single person. Also, during the episode, Turner visits his family, only to go on a trip with his sister, Laura, trying to uncover more of the secrets about their father’s last case.

The overall plot in “A Good Day to Dog Hard” is simple but effective. The good guys win in the end despite going through some challenges. The themes introduced in the first episode are brought back, such as good triumphs over evil, not needing to kill someone to stop them, treating animals with kindness, and loving your family. All this makes for an exciting combination of excitement, comedy, suspense, and heart.

There are significantly fewer objectionable features in this episode of TURNER & HOOCH as compared to the first one. Scott Turner does spend most of the episode in a white tank top undershirt due to a mishap on his shirt, much like the Bruce Willis character in the first DIE HARD movie. Also, Baxter uses a crude picture of Hooch’s behind to express her distaste. Finally, there’s still some outlandish use of gun violence and martial arts fighting in “A Good Day to Dog Hard.” So, MOVIEGUIDE® advises caution for older children.