"Hearts are captured in HEARTS ON FIRE" 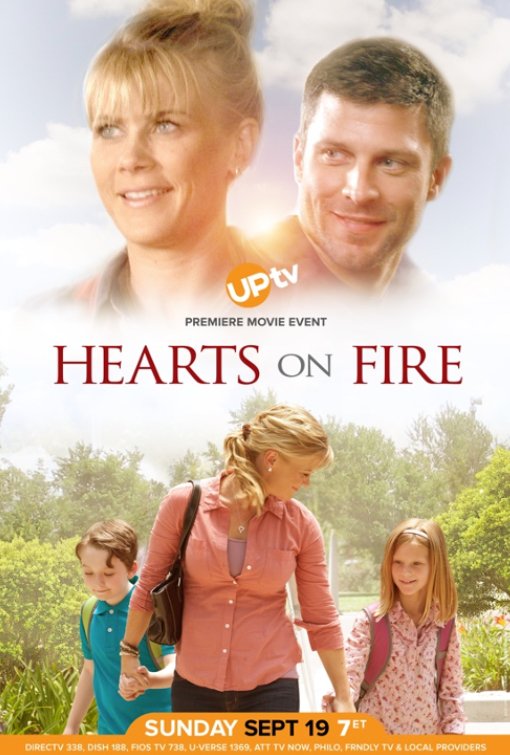 HEARTS ON FIRE is a wholesome romantic drama on UPtv where two people take a chance on trying to be happy. Jenny, a divorced 911 dispatcher and mother of two, finds herself in a financial pickle when her hours at work are cut, and she needs to rent out her spare room. Jeff, an injured firefighter who’s got some baggage of his own, rents the room. The two immediately have an emotional connection. With help from Jenny’s children, Jeff and Jenny not only spark a romance, but a healthy one at that.

HEARTS OF FIRE is adorable and very well made. The audio and visuals are in perfect sync, the acting is good, and the soundtrack is nice. The movie’s best part is how wholesome it is. It contains genuine human relationships and emotions without the use of explicit content. The movie’s themes include showing forgiveness, moving on from tragedy and loving the whole person. It brings a clean wholesome view of second chances for love. HEARTS OF FIRE is an excellent, wholesome romance that couples and families can enjoy together.

(BBB, C, S, M):
Dominant Worldview and Other Worldview Content/Elements:
Very strong moral worldview with some redemptive elements where the main themes focus on forgiveness and moving forward with your lives, divorced woman (the husband abandoned the family) and her two children are a supportive family and loving family, lead male character shows forgiveness to his father’s partner for his father’s death, and he recognizes his role as a father figure to woman’s children, a role he takes very seriously
Foul Language:
No foul language
Violence:
No violence
Sex:
No onscreen or offscreen sex scenes, but there is one comment from lead female character’s coworker that could imply the woman and the lead male character slept together, but it’s not made clear
Nudity:
No nudity
Alcohol Use:
One use of alcohol during a date between two people
Smoking and/or Drug Use and Abuse:
No smoking or drugs;
Miscellaneous Immorality:
Two children lie to their mom a few times, but they’re reprimanded for it, woman is divorced because husband abandoned her and her children.

HEARTS ON FIRE is a cute, wholesome addition to the romance genre, where two unlikely souls learn to take a chance with love and learn there’s always more to a person than meets the eye.

The story follows Jenny McClain, a divorced down to earth mother of two who works as an emergency 911 dispatcher and Jeff Sinclair, a goofy but sweet fireman who has a heart of gold and a troublesome past. Jenny and Jeff start the story off only knowing each other by the sounds of their voices where Jenny refers to Jeff as “Cowboy,” and Jeff knows her as dispatcher “23,” However, one day both of their lives change.

Jenny’s boss tells her that the county’s budget has grown tighter, and so her hours will be cut. So, to make ends meet she decides to rent out her spare bedroom. Around the same time, Jeff injures his leg in a fire and can no longer engage in strenuous activity with his legs. This is a problem, however, because he lives in a three-story walk-up. When Jeff and Jenny meet for the first time, he hears about her available room for rent and decides to rent it. With the approval of her two children, Luke and Elsie, Jenny allows Jeff to rent the room.

While Jeff’s living with their family, Luke and Elsie decide to help their mom with money by offering a reading service at the nearby home for senior citizens. Jeff also becomes a huge help around the house and helping Jenny’s children by assisting with school projects, helping them face their fears, and aiding them with their reading business. The children also start to notice a spark between Jeff and Jenny, and they try to create some romantic moments for the two of them.

Eventually, Jenny and Jeff reveal some of their inner troubles: Jenny is scared to move on because of the hurt inflicted by her husband abandoning her and the children; also, Jeff is haunted by the tragic death of his father and how it affected him as a child. The two learn to take the leap of trust as they truly fall in love with each other and become better people within the relationship.

Overall, HEARTS OF FIRE is adorable and very well made. The audio and visuals are in perfect sync, the acting is good, and the soundtrack is nice. The movie’s best part is how wholesome it is. It contains genuine human relationships and emotions without the use of explicit content. The movie’s themes include showing forgiveness, moving on from tragedy and loving the whole person. HEARTS OF FIRE is an excellent, wholesome romance that couples and families can enjoy together. There is one rude comment by one of Jenny’s co-workers about Jeff renting the room from her. Also, Jenny’s children lie to her two times, but they’re reprimanded.