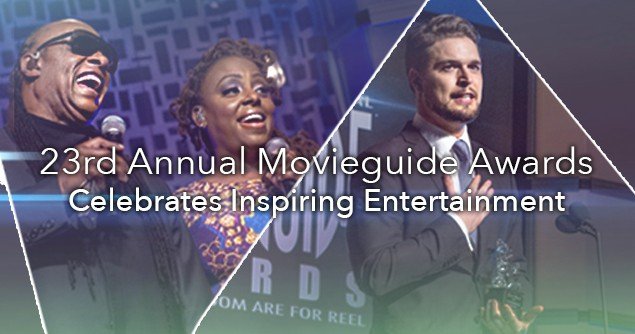 Faith and Freedom Are for Reel

“It was our biggest event yet,” said Dr. Ted Baehr, publisher and founder of Movieguide®:  The Family Guide to Movies and Entertainment, now celebrating its 30th year of “redeeming the values of the mass media of entertainment.”

A one-hour version of the 23rd Annual Movieguide® Awards aired Saturday on the REELZChannel, which will repeat the show tonight, Feb. 23, at 12 midnight Eastern Time and 9 p.m. Pacific.

Among the other celebrities attending the Awards were host Bill Engvall, Korie and Sadie Robertson of TV’s “Duck Dynasty,” Corbin Bernsen of “Psych,” Billy Boyd of “Lord of the Rings,” Cory Oliver, Shane Harper and David AR White of “God’s Not Dead,” Taylor Spreitler of TV’s “Melissa & Joey,” Brian Tee of “Jurassic World,” “The Wolverine,” “Grimm, and “The Gabby Douglas Story,” Jacob Lattimore of “Black Nativity” and “The Maze Runner,” Madison Pettis of “The Game Plan” and “Lab Rats,” Adina Porter of “The 100,” Connor Corum of “Heaven Is for Real,” Candice Cameron Bure of “Full House” and “Mom’s Blind Date,” and legendary entertainer Pat Boone.

Honoring the Good, the True and the Beautiful

Pure Flix’s “God’s Not Dead” and UP TV’s “Love Finds You in Sugarcreek” won the two $100,000 Epiphany Prizes for Inspiring Movies & TV.

Supported by a grant from the John Templeton Foundation, the Epiphany Prizes honor the best, most inspiring movie and TV program of the previous year that “greatly increases man’s love or understanding of God.”

Also, Lifetime and A&E’s “The Gabby Douglas Story” received two awards, one for the Faith & Freedom Award for Promoting Positive American Values in Television and a Grace Award for star Imani Hakim for the “Most Inspiring Performance in Television.”

“The Giver” received the Faith & Freedom Award for Promoting Positive American Values in Movies, and Diogo Morgado, who played Jesus in “Son of God,” won the Grace Award for the Most Inspiring Performance in Movies.

Dave Alan Johnson, Gary R. Johnson and Joan Considine Johnson won the 2nd Annual $50,000 Chronos Prize for Inspiring Screenplays by Established Filmmakers for their script THE STAR OF BETHLEHEM about an 11-year-old girl and her father who go up against a politically correct school system to prove the science behind the Star of Bethlehem, and Jeff Peabody of Federal Way, Wash. took home the $25,000 Grand Prize in the Kairos Prizes competition for “spiritually uplifting screenplays by first-time or beginning screenwriters” with his script WHEN MOUNTAINS MOVED, which is about an investigation by author Charles Dickens into the incredible tales he has heard of George Muller, a dirt-poor preacher from Victorian England saving thousands of poor orphans from the streets.

Glenn Brown of Leeds, Ala. received the $15,000 Kairos 1st Runner Up for his script A SEED OF FAITH and Gina Burlato of Sarasota, Fla. took home the $10,000 2nd Runner Up for her script A HEART OF FLESH.

Both the Chronos and Kairos Prizes are supported by a grant from the John Templeton Foundation (www.templeton.org).

At the Gala, Dr. Baehr presented highlights from Movieguide®’s 2015 Report to the Entertainment Industry, a comprehensive analysis of the major movies released by Hollywood and the entertainment industry in 2014 that showed family-friendly movies and movies with strong Christian, biblical, redemptive, and moral content and values made far more money at the box office here and overseas, and on home video, than movies with strong Non-Christian or anti-biblical, immoral content and values.

Also, movies having no foul language, no sexual content, no nudity, and no alcohol or tobacco/drug use or abuse whatsoever earned much more money than movies with such use or abuse.

1 – HEAVEN IS FOR REAL – Winner of Best Movie for Families

6 – THE HOBBIT:  THE BATTLE OF THE FIVE ARMIES

8 – DAWN OF THE PLANET OF THE APES

1 – LOVE FINDS YOU IN SUGARCREEK

GRAND PRIZE (worth 25,000) went to Jeff Peabody of Federal Way, WA for WHEN MOUNTAINS MOVED