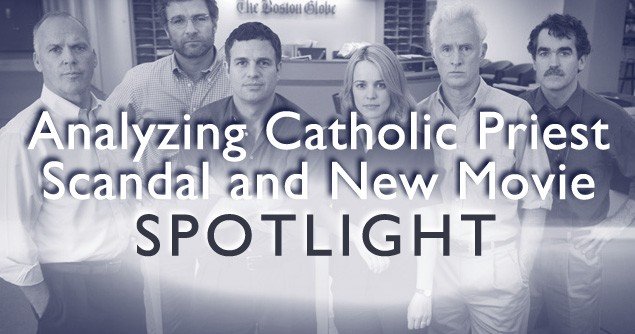 Growing up as the son of a Polish immigrant, I was raised by a man who often seemed more Catholic than the Pope himself. With Pope John Paul II, a Polish native, named the head of the church when I was just seven years old, the Catholic church wasn’t just the denomination, it was a source of cultural pride for myself and my family.

Thus, I grew up around many different priests from a very early age. I started serving as an altar boy at Sunday Mass when I was in first grade, and at my Catholic grade school, St. Edward’s in Little Rock, Arkansas, for their weekly student Masses when I was in fourth grade. Not once did I ever have a questionable encounter or conversation with any of them.

To this day, I remain a devout member of the church, grateful for the sense of Christian faith it bestowed in me as well as a strong sense of moral values that has carried into my career as a film critic with a moral point of view and a clean professional standup comic who frequently performs in church fundraisers. I also have become good personal friends with several priests over the years, including three whose personal cell-phone numbers are on my shortlist of contacts.

Thus, the past couple of weeks have been more difficult than usual, as I’ve been forced to watch and consider the artistic and moral worth of the new movie “Spotlight,” which opened last weekend in five theaters in New York, Boston and Los Angeles and will expand nationally through November 20. The movie depicts the efforts of the team of Boston Globe newspaper reporters who exposed the sex-abuse scandals of Boston-area priests and the diocesan leaders’ cover-up of the scandals, a cover-up that included shuffling accused priests from parish to parish rather than booting them from their duties and alerting the police.

When these real-life scandals became worldwide news in 2002, the reports came as a major shock to most of us who were faithful members of the church. It was horrifying to hear and see the allegations emerge not only from Boston, but from cities and towns all over the planet.

Anyone in any walk of life who is accused of sexual abuse should be thoroughly investigated, and if proven guilty, they should be treated for their disorders, punished by the law and removed from their duties. This should be especially true of priests or any representative of a religion, because they are supposed to be setting an example of holiness that’s even greater than the average person.

Even with all the shock that was merited about the scandals, it sometimes appeared that the Catholic Church and its clergy were subjected to a pile of attacks that just wouldn’t stop. Both sick jokes and serious allegations flourished, and sadly it often appeared that all priests were being tarred with the same brush.

A strong fictional example of the real-life shame and embarrassment that some innocent priests have experienced by such branding is depicted in the superb 2014 movie “Calvary.” In one key scene, a beloved small-town priest is walking down a country road when he comes across a young girl walking alone. He starts a thoroughly innocent conversation with her as they walk, only to have her irate father speed up next to them and order her into his car, while yelling at the priest for being alone with her.

In the intervening 13 years since the Boston scandals came to light, the Catholic Church has instituted extensive reforms to prevent such scandals from happening again, and paid out hundreds of millions, perhaps billions, of dollars in damages to victims. Pope Francis himself has made particularly strong and public calls for justice and reform on these matters.

Now, “Spotlight” comes along. The worry in Catholic circles, and in broader Christian ones as well, was that the movie would be a hatchet job, exploiting old wounds that had just begun to heal and making an unfair mockery of faith as a whole.

Happily, the movie is not like that at all. While the subject matter and how it is handled is indeed gravely serious, Director Thomas McCarthy and his co-writer, Josh Singer, teamed with the real-life reporters their movie depicts to tell a story that’s more about the uphill battles that daring reporters face when trying to uncover corruption of any kind on a grand systemic scale.

The movie also makes it clear that at least in Boston, and likely in many or all of the other cities with similar scandals, the cover-up was systemic and crossed many levels of society. Police disregarded accusations, and newspaper editors themselves ignored whistleblowers and victims, all because they were afraid to take on what they saw as not just an institution, but the work of God Himself in our world.

In one key scene, a reporter in “Spotlight” expresses shock that the equivalent of six percent of the city’s priests were accused of sex abuse. While this is horrible and unjustifiable, that very statement also lays out an unspoken truth:  a vastly larger amount of priests, 94 percent, were never accused, much less proven guilty, of any sex abuse.

Also, the Archdiocese of Chicago commissioned an independent study known as the John Jay Report that showed only 1.8 percent of priests were found guilty. Other studies have led to the widespread belief that three percent of adult males have pedophilic tendencies, leaving priests, who remain below this social norm. In fact, some studies suggest that public school teachers are far more likely to abuse your child than Catholic priests.

“Spotlight” can be difficult viewing at times, but McCarthy never once exploits the reporters’ discoveries or the victims’ stories in lurid detail. Objectively, it’s hard to discount that the story of reporters uncovering such a scandal at what is supposed to be a holy institution is lacking in merit and intrigue. It is certainly resolutely fair in its handling of very sensitive subject matter.

Perhaps, it can even be a source of healing for Catholics and other Christians, whether they were victims themselves or merely saddened by the actions that smeared their church’s reputation. I’ll leave the final word to my friend Father David Guffey, a member of the Congregation of Holy Cross order of priests, and national director of Family Theater Productions, a Catholic media company.

“It is a powerful film. The Church owes a debt of gratitude to the Boston Globe for what they exposed,” Guffey says. “The film also shows that it was not just cardinals and bishops who covered up abuse, but police, attorneys, family, school administrators, and even reporters.

“The eyes of the church have been opened and in the wake of the film there has been a dramatic shift in culture in the church for the good of those most vulnerable. It has been painful but purifying, and I hope healing for all.”