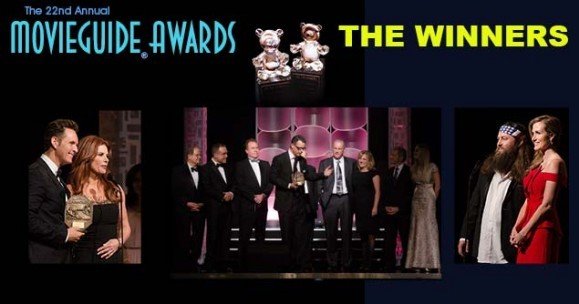 Universal City, Calif. – The 22nd Annual Movieguide® Faith & Values Awards Gala and Report to the Entertainment Industry honored the best, most family-friendly, and most inspiring movies and television programs of 2013 at its annual awards show, held last month in the Grand Ballroom of the Universal Hilton Hotel.

A one-hour version of the 22nd Annual Movieguide® Awards was telecast three times on the ReelzChannel.

GRACE UNPLUGGED and THE BIBLE took home the two $100,000 Epiphany Prizes for the Most Inspiring Movie and TV Program of 2013. Supported by a grant from the John Templeton Foundation, the Epiphany Prizes honor the best movie and television program that “greatly increase man’s love or understanding of God.”

An episode of SHARK TANK won the $50,000 Friess Free Enterprise Prize for promoting free market capitalism, supported by a grant from the Friess Family Foundation.

James Denton and AJ Michalka took home the Grace Awards for Most Inspiring Male and Female Performance for their role as father and daughter, respectively, in GRACE UNPLUGGED.

Matthew Hill and Landon Johnson captured the inaugural $50,000 Chronos Prize for Inspiring Screenplays by established Filmmakers for their script, BURNING AT BOTH ENDS.

Kathryn F. Taylor of Cary, N.C., took home the $25,000 Grand Prize in the Kairos Prize competition for “spiritually uplifting screenplays by first-time and beginning screenwriters” with her action/thriller script THE LION’S DEN.

“I am honored and feel truly blessed to be the recipient of this year’s Kairos Prize,” Taylor said.

“The support and encouragement that everyone at Movieguide® and the Kairos Prize have provided is what every screenwriter struggling to break through dreams of receiving. I hope to continue to write stories that inspire others in their faith, and have been blessed to receive new and exciting opportunities to help me do just that.”

Connie O’Donahue of Beaverton, Ore., received the $15,000 1st Runner Up for her script KEEPSAKE and Jeff Malphurs of New Smyrna Beach, Fla., took home the $10,000 2nd Runner Up for his family/sports script FULL DISTANCE.

The Chronos and Kairos Prizes are supported by a grant from the John Templeton Foundation.

John Heyman, producer and co-director of the 1979 movie THE JESUS FILM, was given the Visionary Award for his work on JESUS.

“What we’re celebrating tonight is you,” Movieguide® Founder and Publisher Dr. Ted Baehr told the honorees and audience members from the entertainment industry.

He said people want great movies, and “great movies are great stories well told, with a positive worldview, that are spiritually uplifting.”

“In 2013, Superman had to go to church in MAN OF STEEL,” he added. “People want Superman to win after he goes to church.”

Dr. Baehr noted that 87% of Americans say they believe in God and that more than 123 million go to church every week, but only 26 million go to the movies every week on average. He also noted that there are 2.38 billion Christians around the world.

“Put that audience in the mix of everything you’re doing,” he told the honorees and industry folk.

One of the highlights of the evening was a performance by quadriplegic celebrity Joni Eareckson Tada, who got a standing ovation for her performance of the Christian song that Oscar snubbed, “Alone Yet Not Alone,” from the movie by the same name.

The Gala audience enjoyed several other performances during the evening. The other performers included Jacob Latimore of the musical drama “Black Nativity,” the J. Kingdom and Destiny 24 Gospel Choir, AJ Michalka, Richie Sambora of Bon Jovi, and Billy Ray Cyrus.

“We’re so honored we are here,” said Korie Robertson of the popular TV show DUCK DYNASTY, which was up for several awards Friday.

“You get to vote on what kind of entertainment you want to see,” she told the TV audience.

“I’m thankful I get to work with my family every day,” added Korie’s husband, Willie Robertson in receiving the Grace Award for Most Inspiring Male Performance in TV.

Roma Downey, beloved star of TOUCHED BY AN ANGEL and the executive producer of the History Channel’s popular BIBLE miniseries with her husband, Mark Burnett, the creative genius behind such shows as SURVIVOR and SHARK TANK, said about the success of THE BIBLE:

“This has been quite a journey for us, for my husband and I, as a married couple. We were very encouraged all last year.”

In accepting the $50,000 Friess Free Enterprise Prize, Mark noted, “America was built on the Bible and free enterprise.”

Below is a list of the winners for the 22nd Annual Faith & Values Awards:

Supported by a grant from the John Templeton Foundation.

2 – LAST MAN STANDING: Back to School

Supported by a grant from the John Templeton Foundation.

8 – OZ, THE GREAT AND POWERFUL

9 – CLOUDY WITH A CHANCE OF MEATBALLS 2

3 – THE HOBBIT:  THE DESOLATION OF SMAUG

3 – THE HOBBIT:  THE DESOLATION OF SMAUG

2 – LAST MAN STANDING:  Back to School

7 – THE HOBBIT: THE DESOLATION OF SMAUG

Supported by a grant from the Friess Family Foundation.

John Heyman, producer and co-director of THE JESUS FILM