Over consumption of media among Christians is an enormous concern. According to a study I conducted in 2003, the average Christian young man is involved in 33.25 hours a week of “screen time” (watching movies, playing video games, surfing the internet). Girls averaged

27 hours a week – the difference being that boys play a lot more video games.

That was seven years ago. Since then, the advent of Wii, smart phones, Blu-ray, and hyper-realistic video games have certainly only made the problem more acute.

While all of these so-called advancements have been coming about, brain scientists have been busy doing some fascinating research of their own – studying the hi-tech culture’s effect on the brain. And the conclusions are simply startling.

How the Brain Works 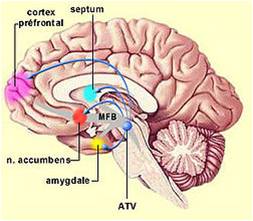 We only have to understand a few basic brain functions to grasp how our entertainment-soaked culture affects the brains of teens. Bear with me for a quick anatomy lesson.

Take a look at this picture of the human brain. The frontal lobe, shaded in purple, is the executive center. This part of the brain lights up when you come up with a plan and execute on it. In the center, in red, is the nucleus accumbens – a collection of neurons that forms the brain’s pleasure center. When a person experiences pleasure, this part of the brain displays stimulation.

The Effect of an Entertainment-Soaked Culture on Kids

So what does a culture like ours do to the brains of teens?

In his book Boys Adrift Leonard Sax reported on a study of 7 to 14-year-old boys which found that playing video games lights up the pleasure center of the brain while simultaneously shutting off blood flow to the executive center of the brain. In effect, these games offered boys the sense that they had accomplished something without actually having done so.*

Consider the shocking implications. The games children play are designed to bring effortless pleasure (movies and music have the same effect). Over time, this slickly produced entertainment “tricks” the brain into by-passing the executive center, making it more rewarding to pursue entertainment and less rewarding to accomplish anything of value. Academic work plummets. Social relationships suffer. And massive entertainment corporations make out like bandits, reaping billions in profits.

Quite frankly, if you’re a parent, teacher, or youth minster, this is horrible news. How could we have allowed the most privileged generation in history – in terms of spendable income, opportunity for education and travel, and access to information – to quietly amuse itself to death?**

The Antidote is Not What You Would Expect

If you’re thinking, “Well, the damage is already done,” here’s some good news.

There is a clear, simple way to rescue teens from the cultural addiction: engage them in conversation in the context of doing real things. Let’s look at two aspects of this answer.

A Christian school headmaster friend of mine was recently approached by several parents whose children had been prescribed medications for ADHD and bi-polar disorder. They trusted their doctors but wondered, “Is there any way we can help our kids without having to turn to these strong medications?” The headmaster wisely proposed the parents give the following plan a try:

•  Take out TVs, Ipods, video game consoles, and computers from your kids’ bedrooms.

•  Allow no more than 30 minutes of video gaming per week.

•  Provide three nutritious meals a day (note that the headmaster had to define “nutritious” for the parents).

•  Plan for one hour of playing outside every day, and three hours on the weekend days.

Amazingly – after a few months of this regimen – all of the children showed far fewer symptoms and were doing significantly better in school (without medication!). For these kids, there was an undeniable connection between unplugging and thriving.

In a similar vein, many parents are starting to take seriously studies done by Dina Borzekowski, Linda S. Pagani and others that demonstrate a correlation between a child’s relatively innocuous television viewing and lower test scores. In fact, public health advocates have caught on and launched a “No Child Left Inside” initiative that appears to be gaining steam.

A quick word of warning: An entertainment-soaked culture affects the brain in similar ways to a chemical addiction. So don’t be surprised if heavily plugged-in kids express bitterness, anger, accusation and even paranoia when they get unplugged. Many parents will cave in to the pressure because they can’t handle seeing their children be unhappy, even for a short time. A few parents, however, will find wise ways to replace screen time with real things and intentional conversation. In the long run, kids who overcome this withering addiction will be significantly better prepared to live healthy, purposeful lives.

2. Engage them in conversation.

Language lights up the brain. And as David Caplan, a neurologist at Massachusetts General Hospital, points out: in order to trigger the use of language, both motivation (from the executive center) and arousal (from the pleasure center) are required.

Language seems to be a bridge that reconnects the broken-down relationship between the executive and pleasure centers of the brain. Notice that this involves active language use, not just passive language reception. We’re talking two-way, engaging, in-person conversations. And that puts the ball squarely in your court to communicate with kids in a way that engages them in communicating with you.

Isn’t it interesting that expressing thoughts through language helps remediate the damage done by a culture built on amusement? The ancient Greeks called this kind of linguistic expression “logos.” It’s the same word used in John 1:1 to describe the ministry of Jesus: “In the beginning was the Word.”

Jesus is the model for engaging people in conversation while doing real things. One scholar estimates that Jesus spent 13 months of his three year ministry just walking from place to place. All the while, he engaged others in conversation: Paul Stanley says that Jesus asked 288 questions in the gospels.

“Come, follow me,” Jesus said. They did. And along the way he equipped them to change the world, and they did that, too.

Editor’s Note:  Dr. Jeff Myers is president of Passing the Baton International, a non-profit organization dedicated to mobilizing one million Christian adults to reclaim the ancient art of mentoring. To subscribe to Dr. Myers’ free e-mail newsletter go to www.passingthebaton.org

**This phrase is drawn from Neil Postman’s book, Amusing Ourselves to Death. I strongly recommend that you read it.