God Is Very Alive at the Box Office 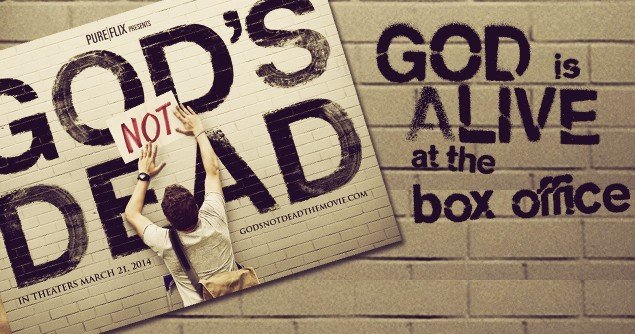 Hollywood is quickly discovering God is not dead at the Box Office. While NOAH is generating massive debate among Christians, and a solid box office return, GOD’S NOT DEAD is also a hot topic in Hollywood.
The Los Angeles Times wrote about the success of NOAH and the box office results for the top four movies and then said, “Delivering a bigger surprise – again – was “God’s Not Dead,” which with $8.7 million finished fifth at the box office for the second week in a row.”

Facing the huge competition from NOAH, GOD’S NOT DEAD only had a 4.5 percent drop in change from last weeks box office haul. Opening in more than twice as many theaters, the $35 million dollar Arnold Schwarzenegger movie SABATOGE did about half the business of GOD’S NOT DEAD on its second weekend.

SON OF GOD, NOAH and GOD’S NOT DEAD have Hollywood talking about the Christian market. Deadline Hollywood wrote:

The lesson to studio heads and marketers is, whether its Noah, God’s Not Dead, Son Of God, Fireproof or Courageous, there is an audience for Biblical films.

“What this shows is that there is an appetite for these type of movies and that there is a particular segment of the population that is being terribly under-served and if you give them the product they want to see, they will come.”

Showing how well he understands the Christian audience he added:

“As far as sustainability and profitability, it’s hard to say because of the differences in the budgets. There are plenty of examples of faith-based films that have been smartly marketed and targeted to a faith-based audiences that have been successful. It proves that there is an appetite for it, but I think that credibility is an issue as well. You can’t pull the wool over the faith-based audiences eyes because they will see it and reject it. And, I think (Son of God producers) Mark Burnett and Roma Downey had ultimate credibility because they went directly to the opinion makers in the faith-based community and showed that they had the goods.”

Last week Moviephone published an article titled “Box Office: What’s behind the Surprising Success of ‘God’s Not Dead’?” After doing their best to explain the big weekend they wrote: “It’s not all rosy for “God’s Not Dead.” For one thing, with “Noah” flooding multiplexes next weekend, the faithful will have a much bigger, more-hyped movie to flock to, giving this one a very short window to make its money.” Oops, they got a second surprise. The window stayed wide open. They concluded with, “Still, the movie’s big opening shouldn’t come as such a surprise. It seems every time there’s a huge debut among a market perceived to be a small niche – whether its Christian moviegoers or black audiences or Latinos or women – the industry treats it as a fluke, a rare exception to the mainstream formula filmmaking and demographic marketing that the industry relies on. What if the conventional wisdom is wrong? How many flukes do there have to be before they’re seen not as the exception but the rule?”

What Hollywood needs to come to grips with is that the Christian audience is not new, not a niche and not a fluke. Christians once filled theaters for THE TEN COMMANDMENTS, BEN HUR and THE SOUND OF MUSIC. Serving this audience used to result in the biggest box office successes of the year. There is a more limited audience for small Christian movies like GOD’S NOT DEAD, but even then, it’s a lot larger of an audience than those who want to see SABOTAGE and many other much more costly R-rated movies. Equally exciting for Hollywood should be the fact that Christians like to buy DVD’s of movies they love.
What’s of great importance to theater owners is that some Christians have virtually quit going to movies. By making movies for them, you get new customers, rather than just moving existing customers from one movie to another.

Hollywood executives are not the only ones who can learn something from the success of GOD’S NOT DEAD. Christian filmmakers can find valuable lessons.

Christian filmmaker Kyle Prohaska wrote an insightful article entitled: “‘God’s Not Dead’ But, Traditional Movie Marketing Is.” He concludes “In such a media saturated culture with so much noise to break through, and with a faith-based market rapidly expanding and more and more theatrical releases of this kind coming out, it’s going to take a lot more than it used to in order to stand out from the pack.”

In order to stand out from the pack one of the wisest things a Christian filmmaker can do is take Ted Baehr’s seminar entitled HOW TO SUCCEED IN HOLLYWOOD (WIHOUT LOSING YOUR SOUL). It explains both the artistic and business sides of successful filmmaking. For more information on the script class, email nikki@movieguide.org.

Hollywood is learning that America is hungry for more movies with strong faith and values. With Hollywood learning this, and with independent Christian filmmakers learning the craft of filmmaking, you can expect better and better things to come from both sources. The wonderful problem will come for Movieguide® when there are eight movies in one year that are the obvious choices for the $100,000 Epiphany Prize for Most Inspiring Movie.