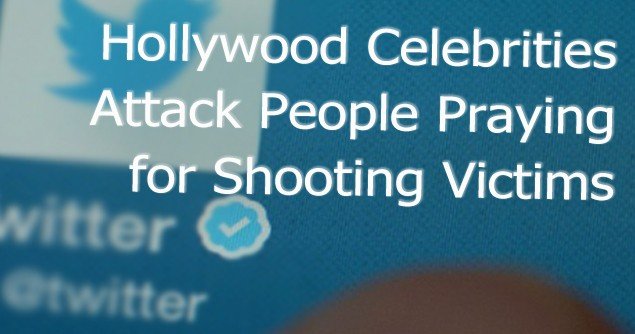 After the evil shooting murders yesterday in San Bernardino, Calif., which took the lives of 14 individuals and injured 21 others, some liberal celebrities in Hollywood took thoughtlessness to a whole new level.

Instead of waiting for the facts to be revealed, like the fact that the Muslim suspects Syed Farook and Tashfeen Malik visited the Middle East recently, and possibly had contact with “Islamist extremists,” according to the New York Times, liberal celebrities like Moby decided to put the blame on Republicans in favor of gun rights.

Politicizing a tragedy is one thing, but others on Twitter took things to a new extreme by attacking anyone whose response was “Pray for San Bernardino.”

For example, Comedian Patton Oswalt tweeted a sarcastic tweet reading, “Please stop asking us to help. We clearly can’t do s***.” Sincerely, Thoughts and Prayers.” The screenwriter of THE BOOK OF ELI, Gary Whitta, tweeted that “prayers are useless” while encouraging people to donate to charities promoting gun control.

Upon confronting Whitta with the fact that the victims of the shooting themselves asked for prayer, Whitta doubled down on his statement.

@garywhitta Your angry tweets don’t do much either. Oh, and thanks for offending all people of faith, including the victims who want prayer. — Ben Kayser (@BenKayser4Films) December 2, 2015

Of course, Whitta’s final tweet here is illogical and, hence, irrational, because the act of prayer does not preclude doing anything else. Also, Calif. has some of the toughest gun control laws in the USA, so why is more gun control a realistic, effective solution at all?

Meanwhile, Billy Eichner from PARKS AND RECREATION added more flame to the fire with his tweet, “Your ‘thoughts and prayers’ don’t mean a d*** thing. #GunControlNow”

Many liberals showed their true colors yesterday. Regardless of their thoughtless, angry attacks, America needs prayer more than ever – prayer for safety, prayer for peace and prayer for more Christian faith and values.

Terrorism and murder aren’t a gun issue; they’re a heart and ideology issue.