Hollywood Publicist Shares the Gospel and a Life Is Saved 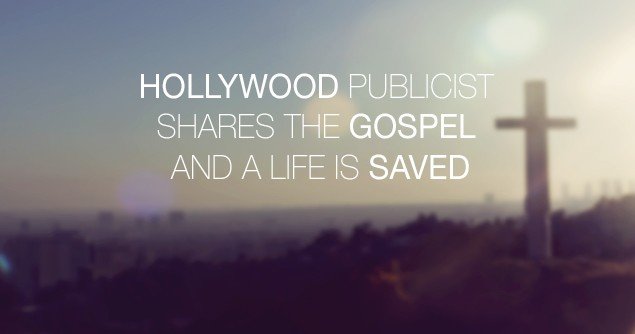 Hollywood Publicist Shares the Gospel and a Life Is Saved

A gentleman in my church recently shared a story about an incident that occurred after a recent heart attack. Awakening from his anesthetic daze, the Lord said to him, “Open your eyes.” As he stared at the unimpressive, white washed walls of his hospital room, the Lord said, “No. Open your eyes and see what is around you.”

“When the servant of the man of God got up and went out early the next morning, an army with horses and chariots had surrounded the city. ‘Oh no, my lord! What shall we do?’ the servant asked. ‘Don’t be afraid,” the prophet answered. “Those who are with us are more than those who are with them.’ And Elisha prayed, ‘Open his eyes, Lord, so that he may see.’ Then the Lord opened the servant’s eyes, and he looked and saw the hills full of horses and chariots of fire all around Elisha.’”

The Lord wanted the man in the hospital to look beyond the obvious and look at the world through His eyes, the eyes of faith.

That’s exactly what Hollywood publicist Domenick Nati did after he accepted a challenge from his local church. For a man who was used to looking to promote the most glamorous celebrities, now the Lord was challenging him to look beyond to what he was doing in the lives of the ordinary people.

On a Sunday afternoon, he, along with six other church members, went out on the streets to open their eyes to what God was doing around them.

“We kept seeing this lady walk by with two children,” Nati said, “and the third time we saw her my friend said ‘We keep seeing that lady.’ So, I said ‘let’s go pray for her.’”1

One week later, the woman showed up at his church. At the end of the service, the pastor announced he was performing baptisms and asked if anyone from the congregation wanted to be baptized. The woman, a non-believer, raised her hand. After being baptized, she shared with Nati that the day he prayed for her on the street, she contemplated ending her life, but his prayer saved her life. An ordinary prayer on an ordinary day saved someone’s life, simply because a disciple of Christ chose to open his eyes and see people as Christ sees them.

Nati told reporters, “I kind of had forgotten that feeling of doing something as simple as walking outside and seeing if people need prayer and praying with people and then seeing their lives changed. Just doing things for God and sharing with people on the street the way the disciples did, there’s just a joy to be a part of that.”

Lord, may we never forget your people. May we open our eyes to see what you are up to in their lives.

Editor’s Note:  Michelle S. Lazurek is a pastor’s wife, bible teacher, mother, author, and speaker. She gives discipleship tips on her weekly blog post (thediscipleshiptoolbox.wordpress.com), leads a community group for (in)courage, and writes articles on leadership for places such as Soli Gloria Deo Sisterhood, Just Between Us and Women’s ministry.net’s Tip of the Week. Please visit her website at www.michellelazurek.com, find her on Facebook at Michelle S. Lazurek or follow her on Twitter @mslazurek.