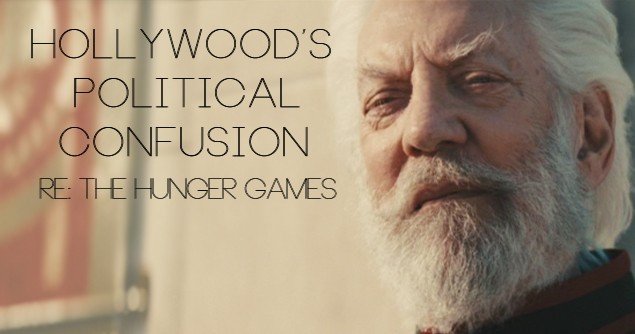 Hollywood often seems to be confused, if not downright clueless, when it comes to politics.

Recently, Actor Donald Sutherland, who plays the evil tyrant in the HUNGER GAMES movies, has repeated previous claims that the HUNGER GAMES movies are liberal or leftist movies showing that young people need to rise up against the top one percent and top ten percent in America who profit from war and violence.

His comments show how confused many leftists in Hollywood are about economics and politics, and even their own profession, popular visual art.

In reality, the HUNGER GAMES movies are a redemptive plea against totalitarian government and pop culture excess, in favor of family, modesty, liberty, faithfulness, truth, courage, and sacrifice. Thus, at the end of the last movie, after stopping the totalitarian government of President Snow and his would-be successor, Katness retires to her middle class family home to lead a peaceful, idyllic life with her husband, Peeta, where they will provide for themselves and their beloved children.

This is not some leftist call to revolution, but a conservative message of Traditional Family, Liberty, Free Enterprise, and Pure Love.

Properly understood, therefore, THE HUNGER GAMES stands as one of the great modern cinematic testaments to conservative values.