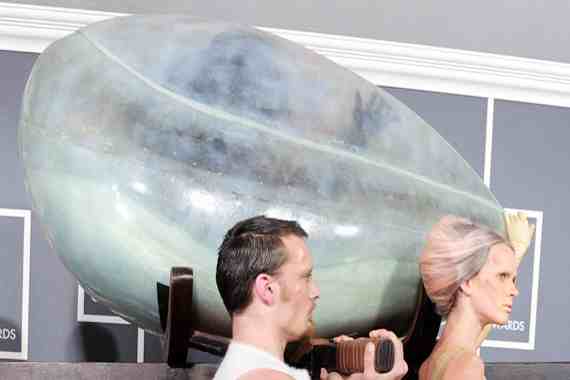 I didn’t actually watch the Grammys Sunday night, but it was hard to miss the report in Monday’s newspaper: a performer named Lady Gaga arrived at the event in a large egg, carried by “slaves” – several men and women dressed in flesh colored garments. During her performance she “hatched” and performed a dance number called Born This Way:

I’m beautiful in my way,

’Cause God makes no mistakes

I’m on the right track, baby

I was born this way.

Lady Gaga may only be 24 years old, but her creatively outrageous and often lewd antics have made her one of the most recognizable, controversial figures on the planet. Case in point: One of her videos on YouTube has more than 340,000,000 views. Yes, you read that number right – 340 million. That’s more than the entire population of the United States.

Lady Gaga knows how to get and keep people’s attention, and that’s no small thing to a generation for whom “personal fame” consistently polls as one of life’s highest goals.

But does all this mean that Lady Gaga is considered a hero and that those in the emerging generation want to be like her?

Two weeks ago Barna Research (http://www.barna.org) released a new nationwide survey of 602 teenagers ages 13 to 17 in which researchers asked who the teens’ role models were. The results may surprise you.

“So who do teenagers name as their role models? Even while limiting the answers to non-parents, family members still comes out on top. The most commonly mentioned role model is a relative – 37% of teens named a relation other than their parent as the person they admire most.”

Add these numbers up and it’s obvious that teens most admire those with whom they maintain a personal connection. This is what we at Passing the Baton call “relationality.” Teens may pay attention to the Lady Gagas of the world, but who they really admire – who they really want to be like–are those they’re around every day.

What Teens Look for in a Role Model

What is it that leads teens to choose people they know personally as their role models? Consider these responses:

Teens may have a fascination with wealth and fame, but it didn’t show in this survey. Only 1% of teens mentioned “wealth” as the reason they admire their role model, and only 1% mentioned “fame.”

So, be encouraged! Lady Gaga may have captured the eyes of our youth, but it is everyday, caring individuals – like you and me – who capture their hearts.

Editor’s Note: Jeff Myers, Ph.D. is the president of Passing the Baton International. For the last twenty years he’s been on the front lines of youth leadership development as a college professor, communicator, author and curriculum developer. Jeff is the author of seven books including HANDOFF and five video coaching systems including “Understanding the Times,” the curriculum that introduced biblical worldview training to Christian schools around the world. More than two million people have used Jeff’s training courses in worldview, leadership and communication. Jeff is also Associate Professor of Communication Studies at Bryan College where he teaches undergraduate and graduate leadership courses. He also serves as chairman of the board of Colorado-based Summit Ministries, and is a member of the Summit Oxford International Board. Jeff and his family live in East Tennessee.