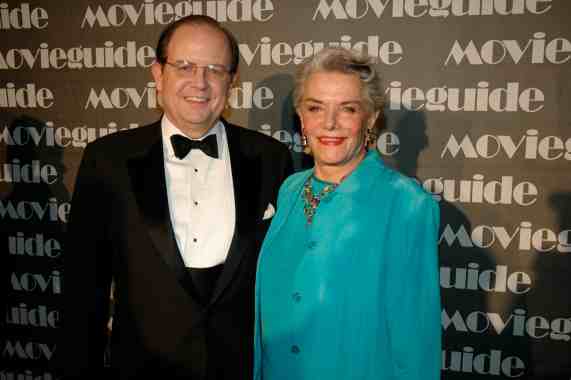 Jane Russell, the legendary star, best known for her role as Marilyn Monroe’s sidekick in “Gentlemen Prefer Blondes,” and


longtime Movieguide® supporter, has died in her Santa Maria Home, after a brief respiratory ailment. She was 89.

“Jane was a devout Christian and while we deeply mourn her loss, we rejoice because we know that she is with Jesus right now,” says Ted Baehr, founder of Movieguide®.

Recalling his last conversation with her, Ted Baehr said she was anticipating her 90th birthday. “Our family had attended her 80th birthday party, and I assured her we would be there to help her celebrate her 90th.”

Russell got her start in the Howard Hughes’ film “The Outlaw” in 1943 and went on to worldwide fame. As a result of her role as Billy the Kid’s girlfriend, in this movie, she became a beloved pin-up girl of World War II soldiers. Hughes took such an interest in the actress that he fired famed director Howard Hawks, and became personally involved in finding creative ways to emphasize the actress’s voluptuous figure. Hughes went to such extremes that he used his knowledge of aerodynamics and ordered his engineers to design a custom “cantilever” bra with no seams to show off Russell’s curves. To his dismay, Russell refused to wear the contraption.

Russell said in an interview that, in spite of Hughes’ exploitation of her curves, he was highly protective of her virtue. When she and LA Rams football legend, Bill Waterfield, had a lover’s quarrel, she said Hughes became so distressed he cautioned her not to date any Hollywood types and encouraged her to make up with the nice young football player, which she did, and they eventually married.

When “The Outlaw” was completed, Joe Breen, who was in charge of enforcing the strict production code (the precursor to the modern-day ratings code), ordered the studio to delete dozens of shots of Russell’s cleavage, but Hughes refused. He re-released the film in 1946 without code approval, “The Outlaw” made millions. Jane, who was deeply religious and taught a Bible study for actors in Hollywood with her mother, always regretted that this movie opened the floodgates for using sex to sell films, a tactic contemporary Hollywood still employs.

“Jane and I spoke at many Christian and conservative events together,” noted Dr. Baehr. “Jane would often quote the “woes” from Isaiah 5. She had a great knowledge of the Bible since her mother had a longstanding Bible study in Hollywood that Jane continued for many years. She often expressed her deep regret of her early career choices.”

Jane Russell was a great friend and supporter of Movieguide®, both as a generous donor and vocal supporter of the ministry. She often participated as a presenter at the Movieguide® Awards but declined our invitation this year because of her illness. Executive producers Lili Baehr and Susan Wales said, “Jane’s presence at our event always created a sensation with the press and, especially, the producers, directors and screenwriters, who clamored to meet the legendary actress.”

Over the years, Jane appeared in “His Kind of Woman,” “The Las Vegas Story,” “The Tall Men,” “Gentlemen Marry Brunettes,” “The Paleface,” “The Revolt of Mamie Stover,” “Fate is the Hunter” and “The Born Losers.”

In her career, she appeared with such stars as Bob Hope, Robert Mitchum, Marilyn Monroe, and Clark Gable.