Behind the Scenes of THE IDENTICAL: Elvis Impersonator Blake Rayne Turns Actor, Opposite Ray Liotta 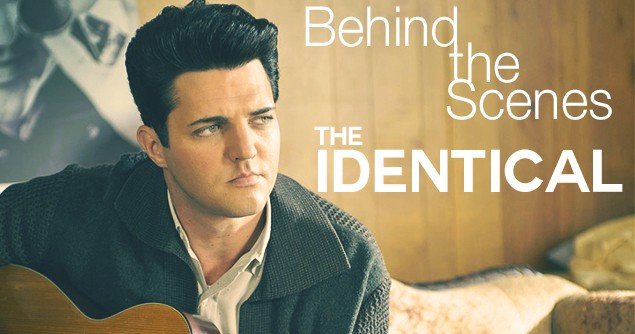 Behind the Scenes of THE IDENTICAL:

By Ben Kayser and Andrew Drexel

THE IDENTICAL a new faith-based drama set to rock audiences by taking them back to the beginning of rock ’n’ roll. It’s a period drama centered on a young man with incredible musical talent who has an identical rock-star brother he doesn’t know. We spoke with Blake Rayne, the star of the movie.

Movieguide®:  I wanted to hear you talk about how you came about finding this part and some of the similarities the story has to your personal story.

Blake Rayne:  You know, it’s an amazing thing. I was rehearsing in Nashville with my band at a rehearsal studio, and at the same time, Yochanan Marcellino, who is the executive producer of THE IDENTICAL, was there looking to rent space to rehearse for the music for The Identical. That’s how we met. This was well before he had the full script done, and he just started talking to me and one day said, “I want to cast you in the lead role. If you can act, I want to cast you because you would be perfect.” That’s how I ended up getting the role. I told him during some of our discussions, though, it’s ridiculous how many similarities Ryan Wade had to my own life. Not just in his upbringing, but being involved in the music and some of the things in his life – there’s a lot of things that mirror my own life. Certainly, I pulled from that while playing Ryan Wade, for sure.

Movieguide®:  Did you relate to a lot of the themes of faith and calling personally?

Blake:  Absolutely! When I say there are so many similarities, I grew up in a strict and religious home. Not a pastor’s kid, but a very strict, religious home. I had to play sports, and I had to get straight A’s. I always wanted to sing and be in the high school play, and I wasn’t allowed to follow my own calling. Once, I got out of school, I started a computer business and got out of it because I entered a singing contest and ended up winning. That opened the door for my musical career, which went on for a number of years, with some twists and turns along the way. Ultimately, that’s what led me to a rehearsal studio one day, where I met Yochanan and I got the part. So, there are a lot of similarities in that journey and in how my faith has been tested over the years, just like how you see with Ryan Wade. There was just a lot of things that hit home for me. It was a great experience being able to portray that on the screen.

Movieguide®:  What was the hardest part of taking on both the characters of Ryan and Drexel? You play two different characters in the story.

Blake:  We dove into that, myself and my acting instructor, working with the producers, directors and writers, because there is such a thing as nature versus nurture, when you have twins who are raised in separate areas, with separate upbringings. Yes, they are biologically the same, but the upbringing will ultimately change who they are. We took into account their upbringing, and how that would have changed their lives as adults. Certainly, when you take a look at Drexel, who became the world’s biggest rock star of all time, versus a kid who grew up in the rural South, a pastor’s kid, there’s going to be a lot of differences in how they conduct themselves and their worldviews. That can affect everything from the decisions you make to how you carry yourself. We definitely put a lot of time and work into that, and it was a lot of fun doing it.

Movieguide®:  Was there a conscious effort to say that Drexel isn’t Elvis? Was it a tribute to Elvis?

Blake:  The thing we wanted to do with the Drexel Hemsley character is look at every major rock star across the 50s, 60s, and 70s, and, of course, Elvis Presley was prevalent in all three of those eras, but really Drexel is an amalgamation of every rock star, and you can see in the movie that the look tends to be more Elvis-esque, but when Elvis was around in the 50s, everyone had a pompadour and side burns. It was the logical way to go. You can see throughout the movie how the look changes in the 60s, how it’s more like the Beatles looking haircut. In the 70s, it’s more like long hair like Jimi Hendrix or Jim Morrison. We tried to include everything, including the dance moves, and the early stuff is more reminiscent of Elvis Presley. I can tell you I spent hours with the choreographer trying to learn how to dance like Jackie Nielson and James Brown. We tried to throw in little bits and pieces along the way, and it was a lot of fun. I’m kind of a music buff anyways, and from the historical standpoint, I enjoyed trying to make this Drexel Hemsley a unique individual.

Movieguide®:  Were you intimidated at all, having to work opposite of Ray Liotta since this is your first movie?

Blake:  This is my first film, and I don’t think “intimidated” would justify exactly how scared I was initially. I just about broke down into tears when I first found out he got cast. This is the kind of person Ray Liotta is:  he flies in two weeks before we start shooting, specifically to hang out with me, to make me comfortable with him. We went to a couple of football games, we went to a couple of concerts, and I really got to know the guy as a friend, and I count him as a friend to this day. He did that just so, on that first day on set, we’d be comfortable together, and it worked. Not only Ray Liotta, but also Ashley Judd and Seth Green, Joe Pantoliano and Erin Cottrell all demonstrated that same kind of attitude…so giving, selfless, to help me along knowing I was a first time actor, in a situation that’s challenging for anyone, to be in a lead role, for the first time. I don’t know that I could have done it without their help.

Movieguide®:  Ray Liotta’s famous for portraying Frank Sinatra. Did he have any tips for acting or portraying a famous musician or rock star?

Blake:  He’s kind of quiet when it comes to his past movies, and it’s interesting because he’s been in 90-some movies, I think, and we’d just be talking, and I’d be asking him about certain things, like “How’d you feel when you saw it on the screen?” and he’d say, “I never saw that one,” or “Never seen it.” It’s really difficult to get any information out of him because a lot of the movies, he just did them and that was it. I can tell you, out of everyone on set, …I watched him like a hawk every day because he would come prepared. He always invested 100% in what he was doing, and the professionalism he brought to the table was just incredible. I really hope, moving forward, that I get the opportunity to emulate his work ethic because it’s just incredible.

Blake:  There was a very strong, positive vibe throughout the entire process. For myself, I did not realize it’s not always that way because this was my first project. Since then, I’ve had the opportunity to be on set again and recognize some of the differences. I really think that starts from the top down. When you have a family like the Marcellino’s (there’s five generations of the Marcellino family working on the movie) they’re great people with a great heart with great humility and a serving heart. The love they show between each other was passed on and it showed all the way from the top to the bottom, throughout the cast. It would have been that way no matter what the subject matter was; that’s the kind of people they are. In a film like this, it only made it stronger. It was amazing to go to work every day.

Movieguide®:  You said you’ve been on a lot of sets after THE IDENTICAL, so it sounds like you plan on doing more acting. Could you talk about those projects?

Blake:  We shot some short films for reels and whatnot; no big projects yet. Two or three days shoots here or there. I hope this moves forward, and I’m able to continue acting. I enjoy the craft of acting, the art of acting, the knowledge that you can give your best, that you’ll always be able to do better. So, you can spend a lifetime working on this. I really enjoy these aspects of it. I hope I get the opportunity to do it more in the future.

Read Movieguide®’s review of THE IDENTICAL.