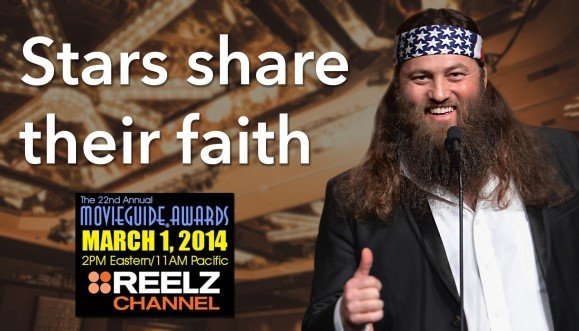 See Stars Talk About Faith & Values Saturday on the

Movieguide® Awards Show on the ReelzChannel

Hollywood, Calif. – Some of the biggest stars, movers and shakers in the entertainment industry will talk about faith and values in Hollywood Saturday on the ReelzChannel’s presentation of the 22nd Annual Movieguide® Awards and Report to Hollywood.

“The annual awards show is a celebration of faith and values in Hollywood,” said Dr. Ted Baehr, founder and publisher of Movieguide®, which has been alerting readers about family-friendly movies and television programs since 1985.

“It’s also a celebration of the best, most family-friendly and faith-friendly movies and television programs of the past year,” Baehr added.

“Blue Collar” comedian Bill Engvall, author of “Just a Guy,” is the host of the show.