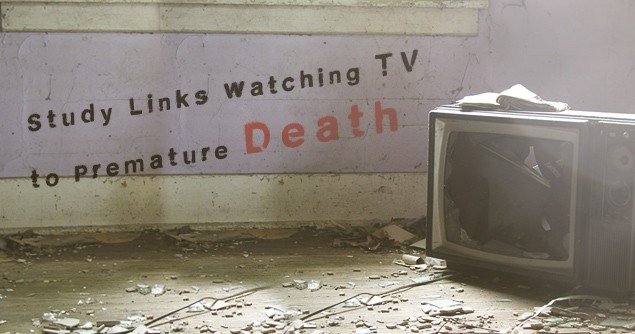 A recent study shows a link between watching a lot of television and premature death.

The study, conducted in Spain, surveyed 13,200 college graduate adults, who were around 37 years of age when the study began. During the eight years the adults were followed, a total of 97 deaths occurred.

The study discovered that adults who watched several hours (three or more) of television daily were twice as likely to become deceased over the study period, compared with those adults who only watched television for an hour or less.

The study also discovered that the total time sitting (which included time spent watching television, using a computer, or driving) of the participants was also connected to an increased risk of death during the study period.

The discoveries of this study remained despite the study’s examiners accounting for other factors that could potentially contribute to a person’s risk of death. These factors included age, sex, smoking behaviors, total daily calorie consumption, snacking patterns, body mass index, degree of physical activity and whether partakers observed a Mediterranean diet, which was connected to longer life span.

On June 25, 2014, the study’s examiners, from the University of Navarra in Pamplona, Spain, wrote an article published in the Journal of the American Heart Association. They wrote:

“Our findings suggest that not only the promotion of physical activity but also the reduction in sedentary activities (especially television viewing) is a priority for the prevention of premature mortality.”

The study doesn’t conclude that watching television is a direct cause of premature death. It only found a correlation between them. Consequently, one of the researchers said that further examination is needed to elaborate on whether decreasing television consumption can possibly decrease a person’s risk of death.