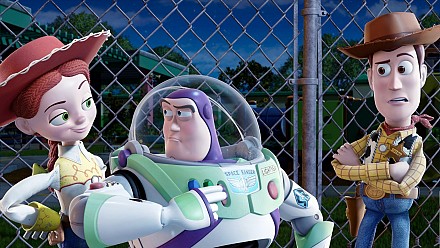 an intentional hidden message, in-joke or feature in an object such as a movie, book, CD, DVD, computer program, web page, or video game.

In Pixar’s latest box office juggernaut, TOY STORY 3, one could fill their basket to the brim collecting the eggs just waiting to be scooped up by observant eyes. The next time you watch the movie, be on the lookout for cleverly cryptic references to past and future Pixar characters and paraphernalia.

One of the first eggs on the hunt is hidden on Andy’s mom’s license plate. It’s labeled “A113.” A little research and you’d learn that that’s the number of a CalTech classroom in which many Pixar animators studied.

Another egg pops up on a postcard to Andy. Read the address carefully and you’ll find it was sent by the stars of last year’s hit, UP: Carl and Ellie Frederickson.

Explore the toy land a bit further, and you’ll discover troves of enchanting eggs including a calendar from Pizza Planet featured in the original TOY STORY, the bully from the first TOY STORY, Sid, moonlighting as a garbage man, as well as multiple references to Lightning McQueen, the illustrious hero from CARS.

Lest any more fun be taken from hunt, see the movie – multiple times, if you must – and see how many eggs are left to be identified.