A Tribute To Jerry Lewis 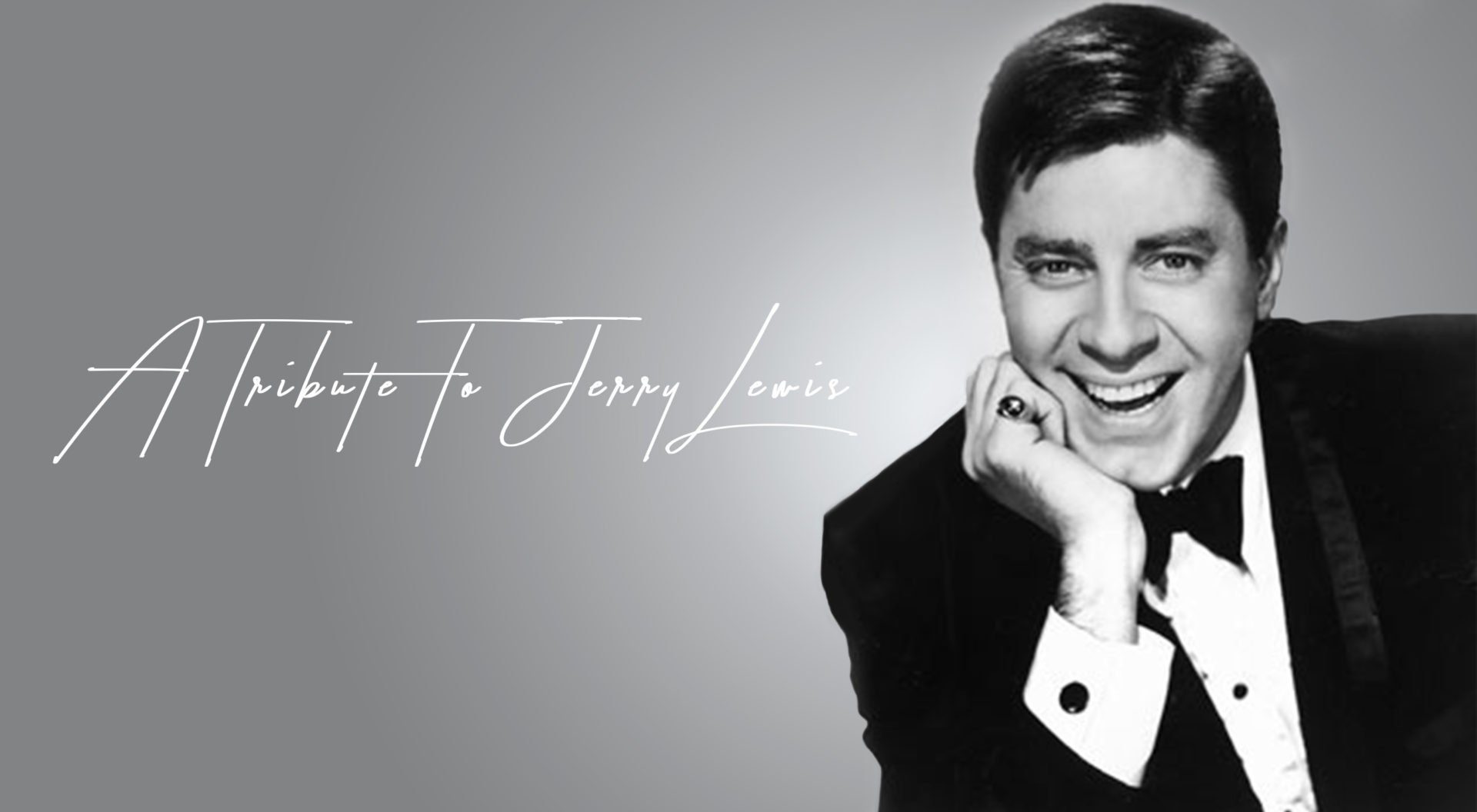 When growing up in Dayton, Ohio in the late 1950s and 1960s, my uncle (who was only two years older than me) and I had three rules about going to the movies:

During this period, Jerry was well on his way to developing a successful solo career, without his singing/comedy partner, Dean Martin. Their last movie, HOLLYWOOD OR BUST, came out in 1956.

So, at this point in time, movies like THE SAD SACK, ROCK-A-BYE-BABY, THE GEISHA BOY, and DON’T GIVE UP THE SHIP followed in quick succession. Then, Jerry wowed his fans with the first movie he directed, his masterful, surrealistic 1960 homage to silent movie comics, THE BELLBOY. The movie is nothing more than a series of comedy skits starring Jerry as a sadsack hotel worker at The Fontainebleau in Miami Beach. In one of them, a man eats an invisible apple, and Jerry miraculously can hear the sounds of him eating (https://www.youtube.com/watch?v=Y4TF2jv_HS8. In another, Jerry is asked to fill a huge auditorium with seats all by himself. The whole time, Jerry doesn’t utter a word. Then, toward the end, when someone asks him why he didn’t say anything, he says, “Because nobody ever asked me.”

After THE BELLBOY came out in the summer of 1960, Jerry had already shot CINDERFELLA with Hollywood veteran Frank Tashlin as director, but that movie was held for a big family movie release for Christmas. Jerry reportedly called Tashlin his mentor when it came to directing movies, and turned in some of his best performances for Tashlin.

After directing THE BELLBOY, Jerry went on to direct THE LADIES MAN, THE ERRAND BOY and his biggest masterpiece, THE NUTTY PROFESSOR, in 1963. He followed that up in 1964 with THE PATSY, another well-regarded, successful effort by the frenetic comedian.

All during this time, Hollywood would re-release Jerry’s classic comedies with Dean Martin in regular movie theaters.

I remember going to see a double feature of PARDNERS from 1956 and LIVING IT UP from 1954, which was a remake of the 1937 classic NOTHING SACRED starring Fredric March and Carole Lombard, who was one of the best comediennes of her day. PARDNERS is a great, colorful, comical homage to westerns, including B westerns, which remain THE iconic staple of Hollywood cinema from Hollywood’s Golden Age. I also remember watching the first true Martin and Lewis movie, AT WAR WITH THE ARMY, at some kind of Boys Club my uncle attended.

Then, there were all the television screenings of Martin and Lewis movies. I remember TV screenings of early Martin and Lewis movies like THAT’S MY BOY, SCARED STIFF and JUMPING JACKS. My fondest memories are of watching their 1953 hit THE CADDY, where Dean Martin introduced his signature song, “That’s Amore.” The scene where they sing the song, which includes a fun bit where Jerry Lewis joins, is a joyous celebration of Italy, family, food, love, and life:

By 1965, the popularity of Jerry Lewis (and even Dean Martin) in the movies had started to lag. Jerry’s movies from 1965 and 1967, THE FAMILY JEWELS and the wonderful THE BIG MOUTH were not as financially or critically successful as his previous movies.

Of course, American critics often gave Jerry Lewis movies the cold shoulder, thinking them too childish, too shrill and too unsophisticated. However, this is missing the point. Jerry’s comical performances were meant to entertain younger children as well as adults. As such, unlike today’s live-action comedies, they were meant for a family audience. Consequently, they often have a cartoonish, even surrealistic, feel to them, which perhaps reflects the effect Frank Tashlin had on Jerry’s later movies (Tashlin’s start in Hollywood was at Warner Bros., where he worked on Loony Tunes cartoons featuring Porky Pig before finally graduating to doing Daffy Duck and Bugs Bunny shorts as well).

The 1965 feature, THE FAMILY JEWELS, is clearly geared toward young children, while the 1967 feature, THE BIG MOUTH, is geared toward older children. Though an acquired taste to some, THE BIG MOUTH is one of Jerry’s funniest movies in my opinion. His character is mistaken for a spy that some gangsters think they have killed, but haven’t really. To escape the gangsters, he poses as his buck-toothed scientist character from THE NUTTY PROFESSOR and as a Japanese kabuki performer.

After THE FAMILY JEWELS, Jerry went on to play more “normal” characters in several Hollywood comedies with other actors, such as BOEING BOEING with Tony Curtis and HOOK, LINE AND SINKER with Peter Lawford and Anne Francis.

The rest of Jerry’s movies are mostly hit-or-miss affairs, such as THREE ON A COUCH, WHICH WAY TO THE FRONT? and HARDLY WORKING. However, there’s plenty of classic Jerry Lewis comedy in his 1983 movie CRACKING UP, also known as SMORGASBOARD. The funniest scene has no dialogue whatsoever and features Jerry Lewis coming into a psychiatrist’s empty office. The floor is super-slippery, as is all the plastic furniture, and Jerry is absolutely hilarious as he tries to walk on the floor or sit comfortably on a chair or the couch.

Jerry often described his comedy success as being able to act like an idiot. “I’ve had great success being a total idiot,” he once said. He also described his comic talent as being able to play either a child or an idiot. In many of their movies together, Dean Martin often called Jerry’s character, “Kid.” (In actual fact, Martin was nine years older than Jerry.) In movies like THE NUTTY PROFESSOR (https://www.youtube.com/watch?v=neEe1itDC_k and HARDLY WORKING (https://www.youtube.com/watch?v=yH5-lyJOvI8, he’s more idiotic than childlike, however.

Whatever the combination, though, Jerry Lewis was a comic genius. As such, I think he shares more in common thematically with silent comic Harold Lloyd, the Horatio Alger of silent comedy, and more in common comically with Stan Laurel of Laurel and Hardy, with a touch of Buster Keaton and a thin Lou Costello, than he does with Charlie Chaplin. Despite that, he reported that he once spent a day with Chaplin analyzing the comedy in each other’s movies.

In 1971, he published THE TOTAL FILM-MAKER, an abridged version of lectures he did in the late 1960s at the University of Southern California’s School of Cinema.

Of course, Jerry was widely known for his charity work as host of the Muscular Dystrophy Telethon every Labor Day, for which he raised $2.6 billion. Though he shunned politics for most of his career, in recent years he’s made comments defending President George W. Bush, criticizing President Obama, and supporting Donald Trump. In the same 2015 article where he supported Trump and criticized Obama, he praised Ronald Reagan’s presidency.

Although he and his first wife, Patti, eventually divorced, here’s a wonderful TV interview featuring a younger Jerry with David Susskind, where Jerry talks about family and religion, and how he and his wife mixed their Jewish and Catholic faiths for their six sons: