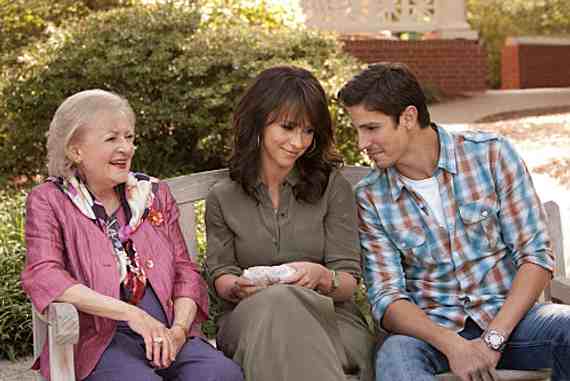 The Joy of Faithfulness

BASED ON THE NOVEL BY: James Michael Pratt

CONTENT: (CCC, BBB, V, M) Very strong Christian, biblical, moral worldview with explicit references to Psalm 23, asking God to preserve someone’s life, leaving everything in God’s hands, keeping the marriage covenant, keeping promises, heroism, and love; no foul language; wartime scenes without excessive blood from World War II where two pilots are rescued in the Philippine jungle and a man loses his life in a Japanese ambush, plus woman has mild heart attack; hugging and kissing between engaged and married couple and another couple who gets engaged; no nudity; no alcohol; no smoking; and, lying but it’s rebuked.

REVIEW: THE LOST VALENTINE is a riveting, entertaining television movie.

It opens with Caroline sitting in Union Station in Los Angeles waiting for her beloved husband who left 65 years ago to go to World War II. Once a year on Valentine’s Day, she goes to the station to keep her promise to wait for him.

A tabloid news programs assigns Susan to create a Valentine’s Day news item about Caroline. Susan is a very secular person and even lies to try to get to see Caroline. She tells Caroline she’s the girlfriend of Caroline’s beloved grandson, Lucas. Lucas devotes his life taking care of his grandmother.

Susan’s deeply involved with another correspondent who travels frequently, but she’s deeply and romantically touched by Lucas and his faithful love for his grandmother.

Susan gets the interview. A flashback then tells Caroline’s story of falling in love with Neil, and Neil going off to war just before their baby was born. Caroline gets so emotionally involved with the interview that she has a heart attack.

Now, Susan has alienated everyone. To make amends, she uses her connections to find out what happened to Neil.

THE LOST VALENTINE is a powerful story that includes references to God, prayer and a dying man’s recitation of the 23rd Psalm. It involves heroism and love. Best of all, it shows a relationship that manifests in keeping one’s marriage covenant and one’s promises. This relationship is so powerful that it changes the secular reporter’s life. In fact, she learns that faith and family are more important than fame or fortune.

THE LOST VALENTINE is another great Hallmark Hall of Fame movie. The acting is very good, especially by Betty White. The production values are high. Everything about this production denotes quality, captivating entertainment.