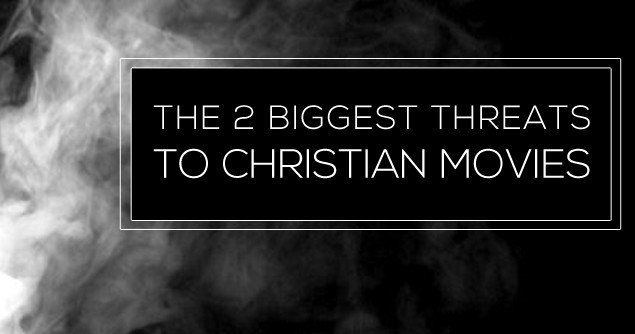 “Learn from the mistakes of others, because you can’t live long enough to make them all yourself.” Those words were engrained in my brain from a young age thanks to my mother, and I continue to apply them today. If history is bound to repeat itself, then why not learn from failures, improve upon mistakes, and push forward in success. Regrettably, the Christian Movie industry (and it’s become an industry of its own), is not entirely learning from their mistakes, and instead, is trying to bury their failures and pretend they never existed. This however doesn’t benefit the industry as whole, and even more so, does a disservice to the Christian audience willing to put their money behind faith oriented movies. The faith based sector has experienced some growing pains in this, with both major successes and some failures. They shouldn’t be ignored, but instead examined, so that we can better our representation of Christ in the arts and reach more people with good values, good entertainment, and ultimately, the good news of Jesus Christ. First however, we need to recognize what the threats are.

No, this is not a joke, the biggest threat to Christian movies is still poorly made Christian movies. Faith based movies are still rebuilding a reputation of mediocrity. While a “bad”, or more accurately poorly made Christian movie can be defined a hundred different ways, let’s stick with the broadest definition. A poorly made movie fails to hit its target audience with precision and skill. There are three recent faith-based movies that can offer insight into this, and they are 90 MINUTES IN HEAVEN, CAPTIVE and WOODLAWN. Now, before a riot begins, let it be said that all three movies mentioned are highly commendable, enjoyable movies, but let’s not kid ourselves, they were duds at the box business, and thus, we should learn why. The movie industry is a business, and if we don’t treat it like a business, we are being bad stewards of the finances that God has given us and we’ll fail miserably. That being said, here’s the likely reason the previous three movies failed.

90 MINUTES IN HEAVEN was a powerful movie, and for those that enjoyed the book and don’t get bored by slow moving dramas, it reached that audience. The major problem is that their writer/director Michael Polish has no clout or name recognition in either the Christian market or even in Hollywood. Every recent faith-based success has earned the audiences trust by bringing on faith leaders, Christian celebrities, or anyone that families of faith can trust to help develop and market the movie. While Don Piper’s book was a best-seller 11 years ago, it’s difficult for an author alone to bring in an audience. Additionally, for a movie about heaven, it was far too bleak for its target audience. Aesthetically, the movie had precision, but for the wrong audience. With a production budget of $5 million, the movie only pulled in $4.8 million, and it should be noted that a movie needs to earn at least two-and-half to three times its production budget for it to be profitable.

CAPTIVE was a terrific and exciting movie, and was made on a shoe-string budget of $2 million dollars. Regrettably, it was hurt by two major factors. Going the route of MACHINE GUN PREACHER, an R rated true-story action movie starring Gerard Butler, CAPTIVE was a little too edgy for the Christian audience and too “Christian” for the secular audience. As the saying goes, “you can’t have your cake and eat it too.” Its distributor, Paramount Pictures, clearly wanted to market the movie to a faith audience without fully knowing what type of movies that audience actually watches. Additionally, the trailer for CAPTIVE features the beautiful worship song “Oceans” from the popular Christian band Hillsong, instantly alienating a secular audience who doesn’t want to pay to go to church. Pulling in $2.7 million at the box office, the movie came and went in limited theaters. The truth is, if you aim for two targets, you’ll likely miss both.

WOODLAWN is a difficult one to swallow. The truth is, so many filmmakers and leaders in the faith-market pulled together to make this movie work. Many, many friends of Movieguide® had a lot riding on this movie’s success, and to everyones disappointment, it couldn’t pull through. The first problem was WOODLAWN’s bloated budget of somewhere between $15-$25 million dollars. Considering that movie would have to make at least $70 million dollars to truly be successful, their eyes were simply too big for their stomach, and they simply didn’t give themselves enough time to accomplish the goal. Additionally, WOODLAWN had an issue that cut deep into its very own story. It wasn’t entirely clear what type of movie it was. With multiple premises popping up in the movie, and no clear direction as to what the goal of the characters were, WOODLAWN had major identity issues that could have been fixed in the writing process. It thought it was FACING THE GIANTS meets REMEMBER THE TITANS, but it had none of the light-hearted humor that both of those movies have. A more accurate comparison would be that WOODLAWN is a football version SELMA, a story of justice in the setting of high-school football, even the Alabama location is the same. The marketing was good in that it was loud and prominent, but the movie failed to hook the audience enough to actually make their way to the movie theater.

While all three of these movies had issues with marketing, it seems that almost every failure can be traced back to the screenwriting. Filmmakers need to understand exactly what their movie’s premise is, and then use every line of dialogue and every frame to move that premise forward. This is why the Kendrick Brothers are masters of their craft as it pertains to their audience. Every movie of theirs can be summed up in one word. Prayer (WAR ROOM), Fatherhood (COURAGEOUS), Marriage (FIREPROOF) and Faith (FACING THE GIANTS). The Kendrick’s know where the target is, and they never lose sight of it. Movieguide® truly hopes that Christian storytellers can learn from the mistakes of others, because we can’t afford to make them over and over. We need each other, we need these stories, but let’s not let our pride get in the way of realizing how we can be better.