What’s Wrong with the Theology of BILL & TED FACE THE MUSIC: A Case Study in Media Wisdom 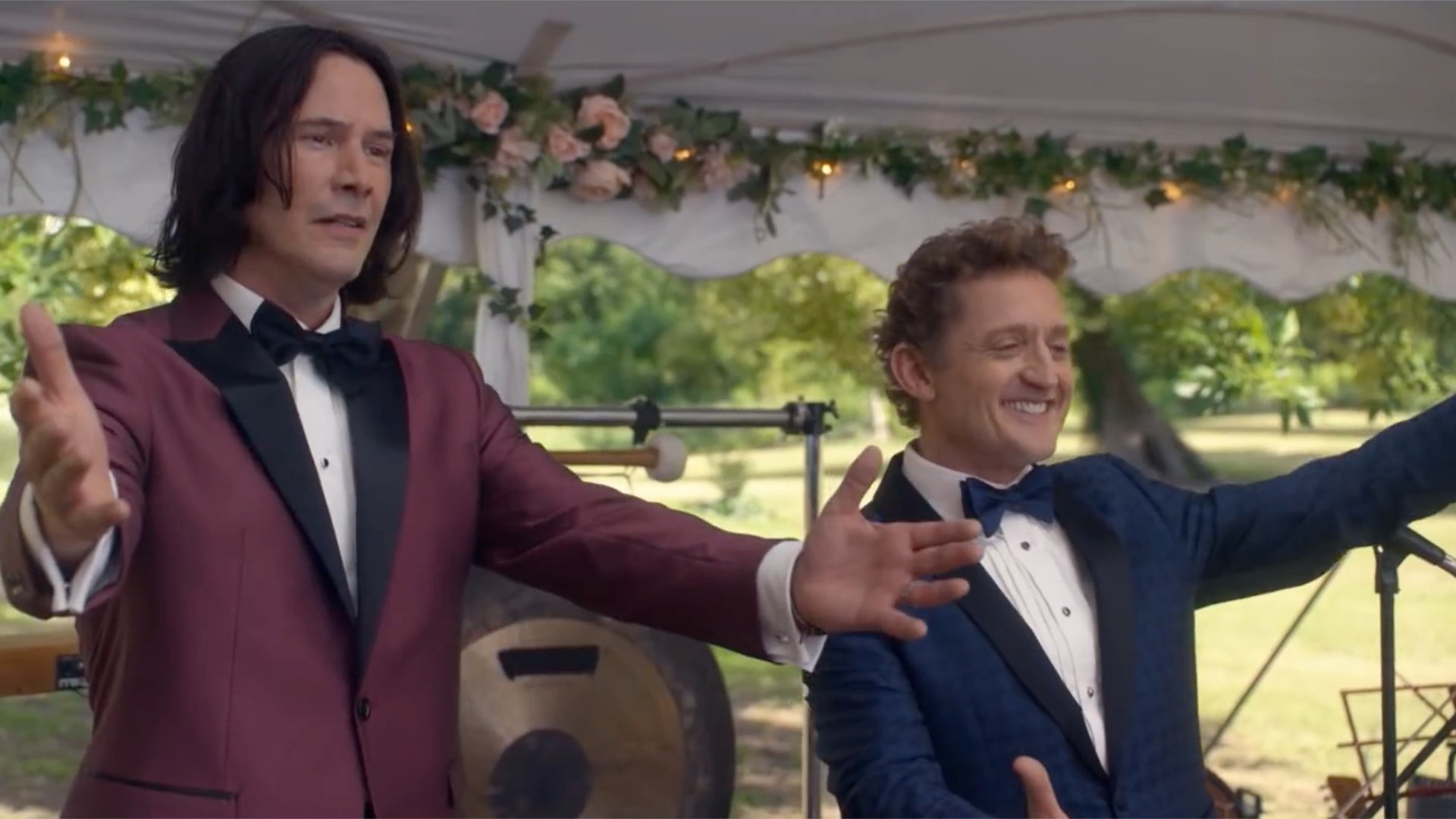 What’s Wrong with the Theology of BILL & TED FACE THE MUSIC: A Case Study in Media Wisdom

We don’t tell readers in our reviews to go to this movie or don ‘t go to that movie. Instead, we tell you what’s in the movie, including the movie’s spiritual, moral, political, and philosophical content. Instead of recommending movies or giving them a thumbs down, we discuss the movie’s good content and bad content, while advising readers what age levels may or may not be appropriate. Along the way, we remind readers that movies can shape the hearts and minds of viewers, including adult viewers, and influence their behavior.

By doing all this, MOVIEGUIDE® hopes to teach media wisdom, to guide moviegoers to choose good movies and reject bad movies.

At first glance, BILL & TED FACE THE MUSIC, the third movie in a series, seems like just a silly, lightweight comedy designed to entertain teenage and adult viewers. That assessment isn’t wrong. The filmmakers don’t seem to have a malicious intent to lead viewers into some kind of spiritual or moral darkness. However, their movie does contain some bad theology that should concern potential viewers and affect their decision whether to see the movie or not.

In BILL & TED FACE THE MUSIC, two middle-aged, not very bright rock guitarists must write a song to save Reality from destruction and bring harmony to the world. Two time travelers from the future tell Bill and Ted they only have 77 minutes and 25 seconds to write that song. However, they’ve been spending the last 25 years trying to do just that. The future of the universe is definitely in danger. Happily, their 24-year-old daughters are on the case too, though they’re just as goofy as their fathers.

In the credit column, BILL & TED FACE THE MUSIC has a strong moral, redemptive premise and elements promoting love, forgiveness, family, and sacrifice. This content gives an endearing quality to parts of the movie. In the end, Bill and Ted are finally able to say, “I love you” directly to their wives. They also are able to apologize to a friend, who forgives them. Finally, their relationship with their daughters is endearing.

On the debit side, however, BILL & TED FACE THE MUSIC has a strong mixed pagan worldview overall. Despite its moral, redemptive themes, it also has strong New Age elements about bringing world peace and harmony through music and working together instead of through the Gospel of Jesus Christ. This Gospel doesn’t just include love and salvation by grace through faith but also includes self-control, being obedient to God’s moral commands in the whole Bible, and transforming the world by making Christian disciples of all nations and teaching them everything Jesus commanded His disciples (Matthew 28:18-20). The movie’s New Age themes suggest a kind of false New Age universalism where the world is saved by a false New Age theology that includes redeeming every single human being throughout time is united in harmony and love, instead of salvation through Jesus Christ’s sacrificial death on the Cross and through the power of God’s Grace and the Holy Spirit.

In addition to this New Age message, the movie shows different historical figures, including George Washington, Babe Ruth and Jesus, being displaced in time as time and space starts to fold in on itself. For example, Babe Ruth takes Washington’s place on the boat crossing the Delaware River during the Battle of Trenton. Also, Jesus suddenly disappears during the Last Supper and ends up on stage at a rap concert. At the end [POSSIBLE SPOILER], Jesus is briefly shown back at the Last Supper, where He and the apostles are shown playing instruments as all of humanity across time participates in the instrumental song that Bill, Ted, their daughters, Mozart, Jimi Hendrix, and Louis Armstrong eventually use “to save reality as we know it.”

Also, when Bill and Ted go to Hell to save their daughters, the place is depicted as the fire and brimstone place it’s often depicted as in some Christian and other illustrations and paintings of the past. However, there’s not much pain associated with this Hell. Bill and Ted find their daughters and the musicians they’ve recruited using pickaxes to break rocks, like some kind of prison movie. Eventually, it turns out that escaping Hell is somewhat easy to do, especially if you get help from the Grim Reaper.

Of course, all this New Age content and the references to Hell and Jesus are played in a light comical manner, with tongue in cheek. So, the movie’s not maliciously Anti-Christian, or maliciously mocking Jesus or the Gospel. However, the above content mars the movie enough to make it theologically unacceptable. BILL & TED FACE THE MUSIC may not be abhorrent like the second BILL & TED movie, which contained some occult content, but its worldview problems probably will confuse unbelievers and people who aren’t trained in Christian doctrine or the Bible, especially impressionable children and teenagers.

The Gospel of Jesus Christ can’t be reduced to some feely touchy New Age rock music vibes, or some kind of feely touchy Evangelical love sonnet about Jesus and the Holy Spirit, for that matter. It’s an ongoing, obedient faith commitment to the God-Man, Jesus Christ, who, in faithfulness and obedience to God the Father, died for our sins and rose from the dead and commands us to obey everything He commanded His disciples, to love God, to thank God, to spread His Gospel, and to love and forgive one another.