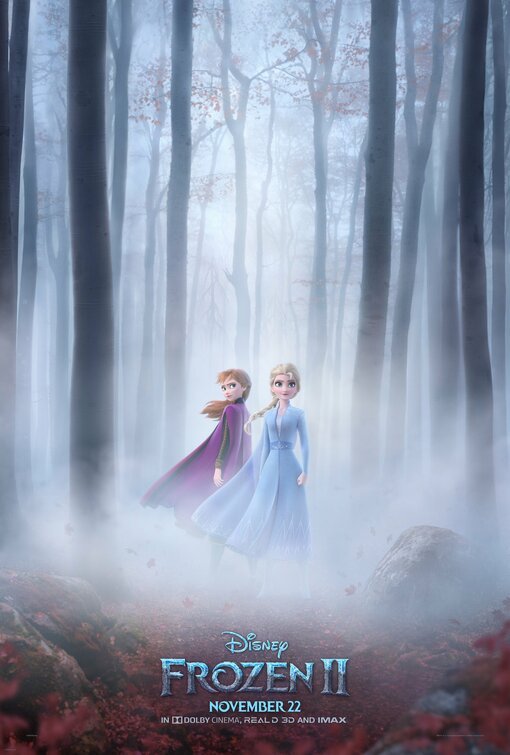 FROZEN II is a sweet animated sequel that follows Queen Elsa and her younger sister, Princess Ana, as they venture to learn about their past and unlock the secrets of an enchanted forest. FROZEN II provides exceptional, funny entertainment, with exciting plot points, great animation and a beautiful soundtrack.

FROZEN II opens with a story about an enchanted forest told by Queen Elsa and Princess Anna’s parents when they were young. Meanwhile, the two sisters and their friends live in Arendelle when a ferocious wind threatens the people’s safety. To find the root cause of this and the truth behind Elsa’s powers, they embark on a journey into a nearby enchanted Forrest that’s blocked by a magical mist. Once they break through the barrier, the gang gets separated and must fend for themselves. Elsa follows a voice that beckons her to a remote island.

(CC, BB, PP, O, FR, E, V, M):
Dominant Worldview and Other Worldview Content/Elements:
Strong, somewhat allegorical Christian, moral worldview with an emphasis on sacrifice, doing the right thing, there’s a line about the need to pray for safety, marriage and friendship are extolled, love casts out fear, with patriotic elements where characters express love of their land and a corrupt king’s actions are rebuked, mitigated by some talk about magic, and one character has the magical power to freeze things, and there are references to the four elements of nature (earth, air, water, and fire) being spirits, but a main human character with special powers becomes a redemptive bridge between the supernatural magical world and the regular human characters in the “natural” world, plus some environmentalist worldview elements showing nature is powerful and deserves respect, and some characters say they “only trust nature,” but their comment is rebuked
Foul Language:
No obscenities or profanities, but one character says “butt”, and there’s talk of vomit
Violence:
Animated violence includes characters engage in battle, giant boulders fly through the air and break a stone bridge, roaring seas threaten the safety of many characters, and a frozen statue shows that a corrupt king killed an innocent man
Sex:
No sexual immorality or content, but a couple kisses a few times, and child characters have their dolls kiss while playing
Nudity:
No nudity shown, but the Snowman character makes a joke about being naked
Alcohol Use:
No alcohol use
Smoking and/or Drug Use and Abuse:
No smoking or drugs; and,
Miscellaneous Immorality:
Trickery.

FROZEN II is a sweet animated sequel that follows Queen Elsa and her younger sister, Princess Ana, as they venture to learn about their past and unlock the secrets of an enchanted forest. FROZEN II provides exceptional, funny entertainment, with exciting plot points, great animation and a beautiful soundtrack. FROZEN II has a strong moral worldview about doing the right thing and showcases a few allegorical Christian themes of sacrifice and love casting out fear, but a few scenes might scare younger children and some of the elements are politically correct or pagan.

FROZEN II begins with Anna and Elsa as young girls. As the pair plays before bedtime, even foreshadowing Anna’s desire to get married, their parents, the Queen and King of Arendelle, come into tuck them in for bed and tell them a story. Once, there was an enchanted forest that was home to the four elemental spirits, earth, water, air, and fire. One day, the King and the soldiers of Arendelle went to befriend the people who lived in the northern forest. The Arendelle soldiers built a dam in the forest to help conserve their resources and bring peace to the native people. One day, however, things went array, and the forest and all who were in it started to battle against one another. Then, the forest closed its borders with a thick mist.

Cut to present day. Queen Elsa now reigns over Arendelle with her sister, Princess Anna, by her side. Elsa slowly begins to hear a voice no one else can hear. One evening, a ferocious gust of wind threatens the safety of the Arendelle people. Elsa and Anna bring everyone to safety in the hills nearby and set off with Christophe, Sven the reindeer and Olaf the talking snowman, to see about the voice that only Elsa can hear and investigate the changes in weather.

The gang comes upon the mist that surrounds the Enchanted Forrest. With the help of Elsa’s freezing powers, they break through the barriers and meet both the native people of the Enchanted Forest and the Arendelle soldiers trapped inside the forest’s walls. Later, a fire breaks out in the forest and separates Anna and Elsa from Sven and Christophe. Meanwhile, Elsa still hears the voice beckoning her to venture further.

Elsa and Anna find a shipwreck along the coastline. As they explore, they realize it was the ship their parents took to get to a remote island and learn the truth about their Elsa’s magical powers to freeze things. While onboard the wreckage, Elsa and Anna piece together that there’s a fifth spirit. Could that be the voice Elsa hears?

Elsa fashions a frozen boat for Anna and Olaf that takes them in the opposite direction as her to protect them from the dangers of the unknown she will soon face. Anna is frustrated because Else promised they would stick together. Anna and Olaf wind up coming across the paths of Earth Giants and barely make it to safety.

Now, with all the characters separated, how will they ever find their way back to each other?

FROZEN II provides exceptional, funny, exciting entertainment. It has powerful plot points, great animation and a beautiful soundtrack. The voice actors bring the lovable characters to life, with Josh Gad stealing many of the comical scenes as Olaf. Viewers will find themselves singing many of the new tunes after seeing this charming sequel.

FROZEN II has a somewhat allegorical Christian, moral worldview. It exalts sacrifice, doing the right thing, friendship, marriage, and even mentions the need for prayer, and the need for knowing truth. Media-wise viewers will also appreciate how the characters combat fear with love which the Bible calls us to do. The way in which the movie bridges the division between the supernatural magical world in the story and the human beings living in the natural world is ultimately redemptive, although children should be informed about the dangers of spiritism. There’s even a call to pray for safety at one point as well as another prayer. Like TOY STORY 4 released earlier this year, also from Disney, FROZEN II features several moral, politically incorrect moments where Christophe pursues Anna to be his bride and isn’t afraid to show his feelings and tenderness toward her. Also, many characters display patriotism for their land.

FROZEN II has some subtle environmentalist elements about having respect for nature, but the emphasis is mainly on people caring for the land where they live. In fact, in one scene it becomes clear that a comment by some characters that they only trust nature is wrong. FROZEN II contains some talk about magic and animistic spirits behind earth, air, water, and fire, but the redemptive elements mentioned above eventually take precedence and resolve the plot problem. Finally, a few scenes with high stakes and jeopardy might scare some younger children. Furthermore, there are clear politically correct elements, such as the duplicitous grandfather patriarch, but the Father and Christophe are great male role models.

It should be noted, that the northern people in Scandinavia, known as Laps or Sami, had a Christian revival in 1907 and still come together every ten years for Christian revival preaching and teaching. In this regard, they realized that their pagan spiritism was as self-destructive and culturally corrosive to them as to other spiritism native cultures. A great book about a culture being delivered from the horrors of spiritism is Spirit of the Rainforest: A Yanomamo Shaman’s Story by Mark Andrew Ritchie about some indigenous people of the amazon. Also, the diversity in the movie is contrary to the facts of the Scandinavian cultures in the past, although it provides a fictional breadth to the movie.

So, MOVIEGUIDE® advises caution for children and suggests that you have media wise conversations with your children.