"A Ghost from the Past" 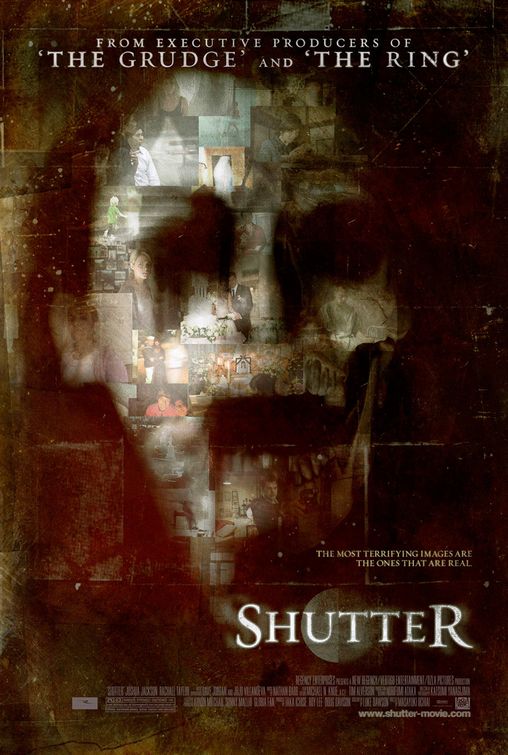 In SHUTTER, a young couple, Ben and Jane, get married in New York City. They fly immediately to Japan, however, where they only have two days’ worth of honeymooning before Ben starts his high-class fashion photography job. While driving at night to a remote cabin near Mt. Fuji, Jane runs into a thin woman who suddenly appears in the road. The car crashes, causing Jane and Ben to lose consciousness. When they awake, neither they nor the police can find the woman’s body. At the cabin, ghostly images appear on their honeymoon photos. In Tokyo, more ghostly images appear on photos. Moreover, Jane and Ben start seeing the apparently dead woman’s ghost. Jane discovers the woman was her husband’s former girlfriend, and the ghost’s appearances turn deadly.

SHUTTER has some profound psychological and theological themes and metaphors about the effects of guilt and sin, but it stops short of forgiveness and redemption. Instead, it turns toward the occultism of spiritualism and a strong proto-feminism. The ghost of the dead woman, who committed suicide, turns out to be heroic. People of faith and values should shun such an abhorrent occult worldview.

(OOO, FeFe, APAP, Pa, FR, C, B, LL, VVV, S, N, A, D, MM) Very strong occult, spiritualist worldview about a revenge-minded ghost, with strong feminist elements and anti-American content where the three American men in the story turn out to be really bad and deceitful people, plus some pagan superstition about spirits, a Buddhist monk appears at a funeral, and light Christian, biblical content about guilt and sin which, however, turns away from ideas of forgiveness and redemption; two obscenities (including one “f” word), four strong profanities and six or seven light profanities; some very strong, often scary violence, including car hits woman suddenly walking in road, car crash leaves two people unconscious, ghost attacks people, images of dead bodies, suicide, two or three pools of blood, ghost attacks man holding camera and viewers see his empty eye socket bloodied after he drops camera, image of dead body being cremated, and man starts to shock himself with camera equipment; implied married sex, implied fornication in some flashbacks, implied rape, and passionate kissing in bed; bare back of woman shown in bed with husband, female model in bra and panties strikes suggestive poses before photographer, another woman shown in panties; alcohol use; smoking and men drug woman’s drink so they can shoot compromising photos; and, lying, deceit, guilty man gets angry at wife, and revenge.

Movies are like a public dream. Their dream images take place in the dark, which promotes a strong unconscious connection between the viewer and the characters on the screen, as dream images do for the dreamer.

As public dreams, movies have a strong metaphorical level that lends itself to more symbolic, figurative interpretations. Thus, it’s a mistake to consume or interpret a movie solely on a concrete level that may extend the movie’s images too far into what is called “the real world,” to the point of possibly distorting its metaphors or, even worse, distorting the creator’s message.

The new horror movie SHUTTER is a good example of cinema’s metaphorical power. A ghost story, SHUTTER has a deep metaphorical, or symbolic, meaning that combines with the movie’s messages, including its moral ones. And, this is indeed a very moralistic horror movie, from a certain point of view.

In the story, a young couple, Ben and Jane, get married in New York City. They have to fly immediately to Japan, however, where they only have two days’ worth of honeymooning before Ben starts his high-class fashion photography job in Tokyo.

While driving at night to a remote cabin near Mt. Fuji, Jane runs into a thin woman who suddenly appears in the road. The car crashes, causing Jane and Ben to lose consciousness. When they awake, neither they nor the police whom they call on their cell phone can find the woman’s body. At the cabin, however, some ghostly images appear on their honeymoon photos.

In Tokyo, Jane and Ben take more photos that contain bizarre ghostly images. Moreover, they start seeing the ghost of the woman in the road. The editor of a spiritualist magazine tells Jane that these are “spirit photos,” a remnant of some powerful emotions associated with this woman. Jane discovers that the woman was her husband’s former girlfriend when he previously worked in Tokyo, and the ghost’s appearances turn deadly.

The ghost woman in this movie is not just a real ghost; she’s also a ghost from Ben’s past that is hurting him psychologically and endangering his marriage. SHUTTER mines this metaphorical level deeply in an impressive manner. Theologically speaking, the ghost from Ben’s past is also a symbol of a great sin that Ben committed before he met Jane. Thus, SHUTTER has strong theological implications as well as the psychological ones just cited.

That’s as far as the movie goes, however. Hence, there is no salvation in the movie for Ben or his marriage. And, there is no possible forgiveness or redemption for Ben’s sin. Instead, the movie tells viewers that the woman’s ghost is actually a warning for Jane about Ben’s secret past, which reveals the evil sexism within his character. It is at this point that the movie’s dream-like metaphors turn away from the Bible and Christianity and turn toward the occultism of spiritualism and a strong proto-feminism that brooks no possibility of redemption for the masculine psyche (unless, of course, the masculine psyche is embodied by a female or, even better yet according to some radical feminists and Marxists, a lesbian). People of faith and values should shun such an abhorrent worldview because it is false, immoral and anti-God. God condemns it in the Bible, and those who follow Jesus must avoid it.