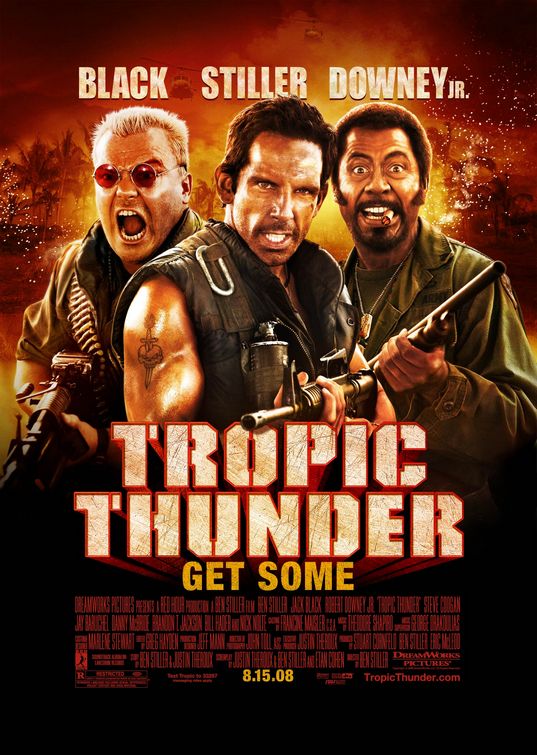 Some of the characterizations in TROPIC THUNDER are funny and clever. The two best ones are Robert Downey, Jr.’s method actor and a hilarious cameo by Tom Cruise as a mean studio mogul. Jack Black, however, is surprisingly bad. Also, some of the other comedy is stupid. Rated R, the movie has more than 200 obscenities and profanities, a couple extremely gory war scenes, and some crude sexual language.

(H, B, Ho, LLL, VVV, SS, N, A, DD, M) Light humanist worldview with some light moral elements, plus drug addict going through withdrawal offers homosexual sex to be let go, in story making fun of Hollywood; at least 185 obscenities, 19 strong profanities and three light profanities; a couple of scenes with extremely gory violence and lots of action and comic violence includes actor has arms shot off in extended scene, man finds decapitated head and lick wounds to prove that the head is a fake movie prop but it’s not, gunfights, explosions, and fighting; crude references to oral sex in one scene and crude verbal references to fornication in music video with bikini-clad women; bikini clad women in one scene and upper male nudity in other scenes; alcohol use; smoking and strong references to cocaine and heroin use by one character; and, kidnapping.

Some of the characterizations in the new R-rated comedy TROPIC THUNDER are very funny and clever. They are laced, however, with abundant foul language and a smattering of extremely gory, excessive comic violence. There is also some stupid humor that’s over the top and mostly ineffective.

After the wacko studio head (played by a hilarious but foul-mouthed Tom Cruise in heavy makeup) threatens to shut down production, the war movie’s director decides to do the rest of the movie “guerrilla style,” deep in the jungle, away from the large crew assembled in Vietnam, and away from the actor’s cell phones. He takes the four men, plus another actor (played well by Jay Baruchel), out into the wild.

A real land mine left over from the Vietnam War blows up the director, however. Tugg Speedman finds the director’s head and thinks it’s a fake prop. Then, a group of drug lords, led by a vicious 12-year-old Asian kid, mistakes the actors for American narcotics soldiers. They capture Tugg, but the other three actors decide to rescue him.

TROPIC THUNDER works best, and most humorously, as a send-up of Hollywood and the narcissistic acting profession. Downey is especially good as the serious actor who never breaks his character as the angry black man. And, Cruise is so good as the vicious studio mogul that it’s scary. His crazy performance shows the dangers of working for one of Hollywood’s sometimes maniacal moguls. In fact, the movie’s satire of Hollywood is pretty effective.

Surprisingly, however, Jack Black is the weakest link in the chain. His turn as the drug-addicted comedy star is a one-note joke that plays like something from a minor comedy skit on SATURDAY NIGHT LIVE. And, some of the other comedy is stupidly over the top and/or hit-and-miss.

Beyond that, TROPIC THUNDER is chock full of strong foul language. There is also a smattering of crude sexual references and extremely gory jokes about war violence, including an example of unintentional cannibalism (Stiller’s character in one scene thinks the director’s decapitated head is just a prop, so he starts licking its wounds to calm the fears of his fellow actors). There is no explicit sexual nudity, however.