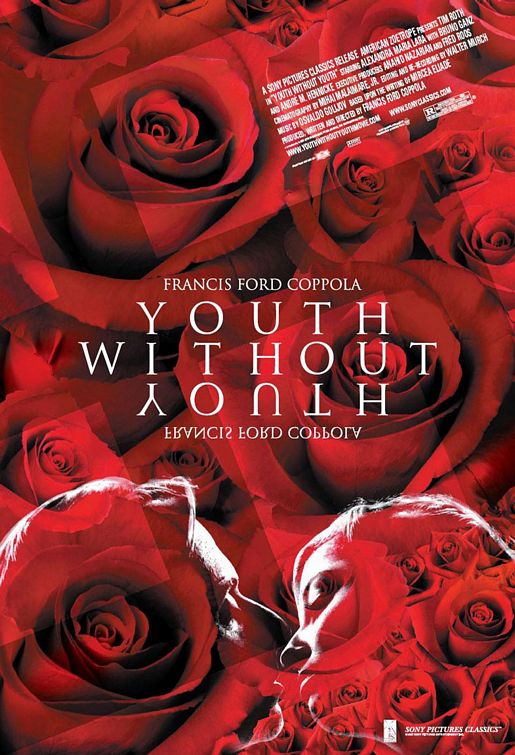 YOUTH WITHOUT YOUTH, by famed director Francis Ford Coppola, stars Tim Roth as Dominic, an aging linguistics professor given a second chance at youth. In 1938, a despondent Dominic sets out to commit suicide but is struck by lightning. As he lies in a Bucharest hospital, the doctors are astonished to see his youth returning. Dominic’s new immortality, as well as his unexplainable, highly evolved intellect, attracts the attention of the Nazis, who force him into exile. In exile, Dominic finds he has psychic abilities. He stays on the run from the Nazis and meets a young woman, Veronica. Veronica becomes a vessel for reincarnated souls, which allows Dominic to study the origins of ancient languages, but his occult studies may kill her.

Though beautifully photographed and acted by Tim Roth, YOUTH WITHOUT YOUTH is a tedious journey. In the true spirit of pagan syncretism, the movie tries to heap together and explain way too many complex spiritual, religious and historical elements, in a slipshod, metaphysical, jumbled attempt at creativity. Despite some positive Christian, biblical elements, the movie contains major instances of false religion, mixed humanist elements, some sexual content, and explicit nudity.

(PaPaPa, FRFRFR, HH, So, Co, C, B, OO, L, VV, NN, SS, A, D, M) Very strong mixed pagan worldview with a very strong emphasis on false religions such as Hinduism, reincarnation, transmigration of the soul, enlightenment, depiction of the false god Shiva, and mention of the Great Witch Maya, some humanist statements about the primary place of science above all, some National Socialism and Communism portrayed but not glorified, plus some light but overtly positive biblical and Christian references to God, Easter, prayer, and Catholic rites, and some strong occult elements, including psycho-kinetic abilities, such as moving things with one’s mind, that recall some aspects of New Age paganism; a few light obscenities and a couple light profanities such as, “Oh God”; violence includes strong depiction of man being struck by lightning and charred, man is shot with gun, and some eluding of Nazis; sexual content includes depicted fornication, implied fornication and some kissing; nudity includes upper female nudity, rear female nudity and rear male nudity and naturalistic upper male nudity; light alcohol use depicted; light smoking depicted; and, miscellaneous immorality includes woman is part of the Nazi secret service and Nazi scientist experiments on animals.

Famed director Francis Ford Coppola’s latest movie, YOUTH WITHOUT YOUTH, stars Tim Roth as Dominic Matei, an aging professor of linguistics who is given a second chance at youth. Following his rejuvenation, Matei takes a bizarre, metaphysical journey through the origins of language, time and the conscience of life itself.

In 1938, a despondent professor Matei, having never completed his life’s work, sets out to commit suicide. Then, fate intervenes, and he is struck by lightning. As he lies in a hospital in Bucharest recovering, the doctors are astonished to see that his youth is returning. His new apparent immortality as well as his unexplainable, highly evolved intellect, attracts the attention of the Nazis. He is then forced into exile.

While in exile, he finds his psycho-kinetic abilities increasing as he can absorb books by simply passing them in front of his eyes as well as moving objects with his mind. As he stays on the run from the Nazis, he meets a young woman, Veronica, who becomes a vessel for reincarnated souls. Her para-medium episodes continue to take her further back into time, allowing professor Matei to study the origins of ancient languages. Veronica’s soul migrations, however, take their toll on her physically, and Matei is forced to choose between his love for Veronica and his life’s work of finding the world’s proto-language.

Although beautifully photographed, YOUTH WITHOUT YOUTH is a strange, tedious journey that, in the true spirit of pagan syncretism, tries to heap together and explain way too many complex spiritual, religious and historical elements in a slipshod, metaphysical, jumbled attempt at creativity.

On a positive note, Tim Roth, in every character he portrays, always delivers a rich interpretation that illustrates his credibility as a performer and shows his great care in handling his roles. His turn as Professor Matei is no different. Simply put, he shines. That said, not even Roth’s brilliant performance could pull this movie out of the mire in which it finds itself.

Coppola, through the years, has gained a reputation as being one of the truly great filmmakers of modern moviemaking, but this movie, although pretty to watch, falls far short of genius.

The movie’s strange story, coupled with major instances of false religion, mixed humanist elements and some sexuality and nudity make YOUTH WITHOUT YOUTH a movie on which most audiences will choose to not waste their youth or their time.