"The Modern World Comes to Downton" 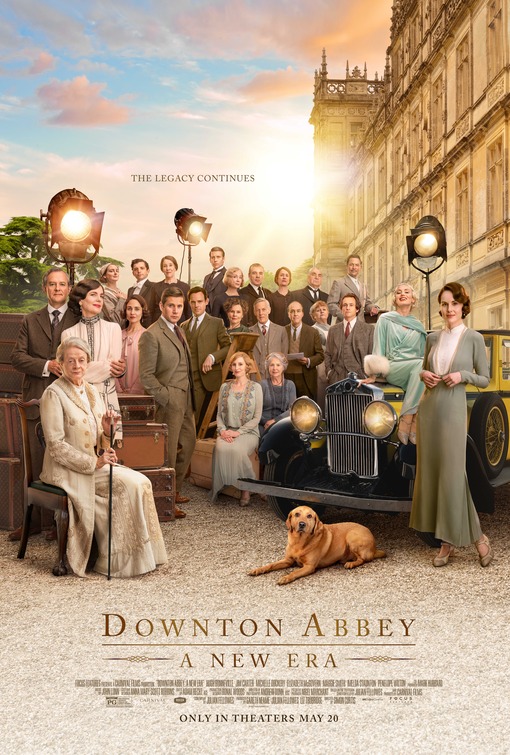 In DOWNTON ABBEY: A NEW ERA, based on the popular PBS series, things at Downton Abbey are changing. The year is 1927. Violet Grantham, the family matriarch, plans to leave a French villa she owns to her granddaughter, Sybil, whose mother died during the series. Many characters from Downton travel to see it and make sure the inheritance is legit. Meanwhile, Lady Mary and the servants at Downton welcome a film crew to the estate, just in time for the technology of filmmaking to change, which requires extra help from the Downton staff and family.

DOWNTON ABBEY: A NEW ERA has stellar production values. The script is superbly paced and contains amusing, lively dialogue that keeps viewers engaged. A NEW ERA has a strong Romantic worldview stressing following your dreams and acting on your feelings. However, it also contains some strong moral values such as remaining faithful in marriage and caring for family and friends. DOWNTON ABBEY: A NEW ERA contains almost no foul language. It does have some homosexual innuendos and references between two male characters. So, MOVIEGUIDE® advises strong caution.

(BB, RoRo, HoHo, C, P, L,V, S, A, M):
Dominant Worldview and Other Worldview Content/Elements:
Strong moral worldview refuting infidelity and caring for one’s family and friends with Romantic values such as following your dreams and acting on your feelings, plus some homosexual innuendoes and references where a homosexual man wants to live “freely,” and an actor asks him to move to Hollywood to be his dresser and says it can mean as much or as little as he wants, and the first man’s employer says she hopes he’ll be “as happy as our cruel world allows,” some light Christian elements where a wedding ceremony at a church is performed by a priest, and a character proclaims “Thank God,” and light patriotic moments where British citizens stand for the British National Anthem after a movie plays at a theater
Foul Language:
One bloody hell, three light profanities (mainly “My God”) and implied seasickness
Violence:
Woman breaks a vase in anger in one scene
Sex:
A few married couples kiss in different scenes, a comment about everyone wanting to be with Lady Mary, and some homosexual innuendoes and references
Nudity:
No nudity
Alcohol Use:
Social and celebratory drinking but no drunkenness
Smoking and/or Drug Use and Abuse:
No smoking or drugs,
Miscellaneous Immorality:
Secrecy, staged gambling for a movie, and a character calls a doctor a quack.

Things at Downton are changing in DOWNTON ABBEY: A NEW ERA, the second movie following the PBS series. The year is 1927. Downton’s matriarch, Violet Grantham, calls a meeting with her lawyer and family. Apparently, Violet owns a villa in the South of France given to her by a male acquaintance she met for a week in the 1860s. Violet plans to leave it to Sybil Branson, her granddaughter, whose mother died and doesn’t have an inheritance at Downton. Violet’s news inspires her family to speculate who this man was to Violet.

Shortly after Violet’s announcement, Lady Mary Grantham receives a call that a film crew from London would like to use Downton as the location for their next film. After some reluctance, the family agrees. After all, the funds from the filming will help repair the roof and keep Downton in great shape. Just before filming gets underway, Tom Branson, Sybil’s father, and his new bride, Lucy, Lucy’s mother Maud Bagshaw, Lord and Lady Cora Grantham, Lady Edith, her husband, Bertie, and Mr. Carson, the former butler of Downton, travel to the South of France to see the villa and to make sure the inheritance is legit.

They’re met by the son and wife of the late Frenchman who left the house to Violet. The son, the Marquis de Montmirail, welcomes them with open arms, but his mother is less friendly. While there, the Downton crew discovers a photograph of Violet in the house that piques their curiosity all the more. Montmirail also speculates that he and Lord Grantham could be brothers, based on the timeline of Violet meeting his father.

At a party one evening, Lady Cora finally tells Lord Grantham that she’s in poor health. They will see a doctor when they return to Downton Abbey.

Back at Downton, the movie’s director, Jack Barber, halts production because the studio wants a talking picture, instead of a silent one. However, talking pictures are a new craft in filmmaking. Making a talking picture throws the cast and crew off their game, until Lady Mary steps in to help with the lines and a former footman of Downton, Mr. Molesley, helps write the dialogue. Meanwhile, the servants of Downton have mixed feelings about the production and so do the lead actor and actress who grapple with their professional future, now that they’re not just miming words anymore.

Eventually, the rest of the Downton Abbey family returns from France as the movie edges closer to finishing production, while Violet’s health suddenly takes a turn for the worst.

DOWNTON ABBEY: A NEW ERA has stellar production values. The scenery of the French and English countryside is breathtaking, the costumes are beautiful, and the script has great pacing and fun dialogue that keeps viewers engaged with the plot. However, fans of the series and previous movie might have an easier time keeping up with the story, since they’re more familiar with the characters. Film afficionados, however, will appreciate the self-reflexivity of the movie within a movie, and A NEW ERA’s depiction of how the movie industry had to adapt to the advent of talking pictures, a new and unfamiliar technology.

DOWNTON ABBEY: A NEW ERA has stellar production values. Also, the script is superbly paced and contains amusing, lively dialogue that keeps viewers engaged. A NEW ERA has a strong moral worldview mitigated by some minor follow your dreams and act on your feelings. The movie emphasizes remaining faithful in marriage and caring for family and friends. There are also brief Christian and patriotic elements. DOWNTON ABBEY: A NEW ERA contains almost no foul language and no disturbing violence. It does have some homosexual innuendos and references between two male characters, though. So, MOVIEGUIDE® advises strong caution.