"Saving the World by Helping Others" 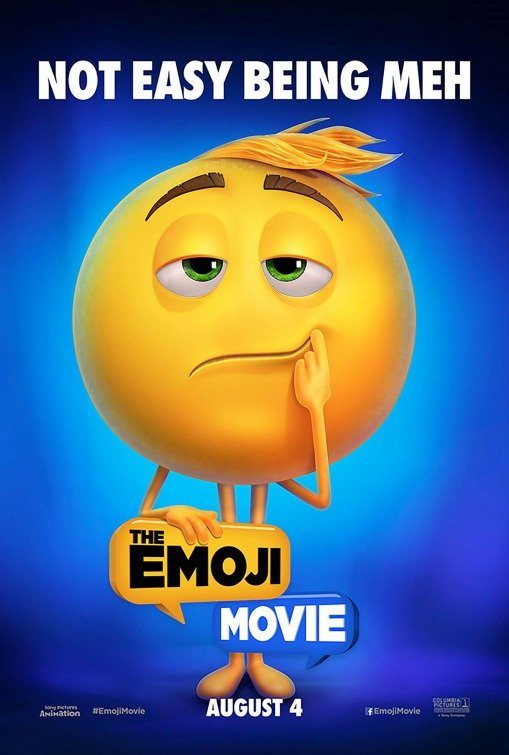 THE EMOJI MOVIE is a fun animated family comedy. Gene wants to be a working emoji, like every other emoji his age. When he goes to work for the first time, he messes up and puts all the emojis in a compromising position. Now, the cellphone’s owner, Alex, wants to delete all his apps and has set up an appointment to do so. The manager of the emojis, Smiler, sends out Botts to delete Gene from the phone, so Gene runs away. He runs into Hi-5, who leads him to the one person who can reprogram him, Jailbreak. Eventually, Gene must find a way to prevent all the emojis from being deleted.

THE EMOJI MOVIE is a funny and touching family movie that has a strong moral worldview about helping and supporting others. The animation is well done and smartly designed. Each scene has a creative landscape, though some of the apps seem like they’re only in the movie and included in the storyline for promoting the app. Though this is the case, THE EMOJI MOVIE is clever, funny and even heartwarming.

(BB, CC, Ro, L, V, A) Strong moral, redemptive worldview promoting helping and supporting others, mixed with some Romantic elements of following your heart sentiments; one profanity, no obscenities, character vomits up a candy and re-eats it, some scatological jokes (for example, there’s a poo emoji family); light violence of characters falling and hitting things but nothing much; no sexual content, but wife gets angry at husband and says they are going their separate ways, though she returns; no nudity; there’s a bar scene; no smoking or drugs; and, nothing else objectionable.

In THE EMOJI MOVIE, Gene wants to be a working emoji, but when he finds out he has more emotions than just one, he must go on a mission to be reprogrammed. THE EMOJI MOVIE is a fun family movie that has a moral worldview about helping and supporting others.

Gene wants to be a working emoji, like every other emoji his age. His parents are the Meh emoji, and if Alex, the owner of the phone, picks the Meh emoji, that is the only emotion they can portray. Alex is a teenage boy who mostly texts with emojis. So, inside his phone, the emojis have created a very well-built, elaborate system to provide Alex with the perfect image.

One day Gene is walking to the emoji headquarters and sees his parents. His parents don’t think Gene’s ready to take on the job of being a Meh emoji, but Gene begs them to let him do it. Getting into his cubicle, waiting to be picked, Gene is excited, but the moment he’s picked he messes up and does many different emojis, instead of just a “Meh.” The emoji manager, Smiler, is extremely upset that Gene has messed this up. He calls an emergency board meeting. The board and Smiler determine that Gene needs to be erased. They send out Botts to get him.

Jailbreak agrees to help the two of them, but tells them they must go through multiple apps to get to the cloud. The first app they go through is Candy Crush, where Gene gets stuck in between the game and has the potential of being deleted. The second app they must enter is the JUST DANCE app, where they must dance just to stay alive. However, Jailbreak is a horrible dancer, so she’s very worried about getting out alive.

While all this is happening, Alex decides to take his phone into the cellphone store because he thinks it’s acting up. He sets an appointment for the next day, which will erase everything on the phone. When the emojis see this appointment, they stress that they will all be deleted.

Will Gene be able to stop everyone from being deleted?

THE EMOJI MOVIE is a fun animated movie for the whole family. The animation is well done and smartly designed. Each scene has a creative landscape, though some of the apps seem like they are in the movie and included in the storyline just for promotion. Though this is the case, the movie is fun and entertaining.

THE EMOJI MOVIE has a strong moral worldview that stresses helping others. Though this is the case, it does have a bit of a Romantic worldview encouraging viewers to follow their heart. Overall, however, the entire family will enjoy THE EMOJI MOVIE and find the movie funny and touching.