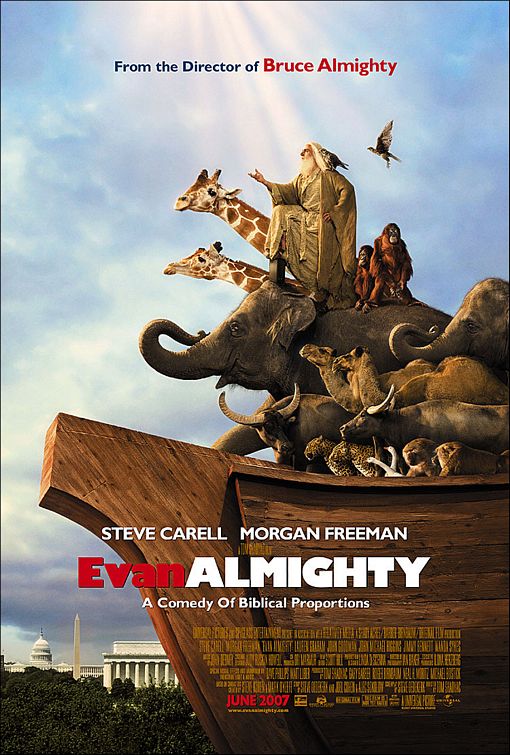 EVAN ALMIGHTY stars Steve Carell as Evan Baxter, the anchorman from BRUCE ALMIGHTY. Evans moves his wife and three sons to Washington, D.C., where Evan will serve as a new U.S. Congressman. Evan prays to change the world, so God appears and tells Evan to build an ark, because there will be a flood coming on Sept. 22. God puts Evan into all sorts of predicaments, forcing Evan to announce what God has told him. This makes Evan the laughing stock of the nation. The working out of God’s plans, however, eventually blesses everyone.

EVAN ALMIGHTY is a cute, funny and heartwarming family movie with a thrilling ending that makes up for the movie’s theological mis-steps. Steve Carell is wonderfully ditzy as the object of God’s direct affection and attention. Although EVAN ALMIGHTY has strong biblical references, it also has some scatological humor and theological problems. In particular, the movie does not make it clear that, when God appears in human form, he always appears as Jesus Christ as noted in John 1. Still, it is more family friendly than BRUCE ALMIGHTY, so it is a more suitable movie for older children.

(BBB, C, FR, Pa, L, V, M) Very strong moral worldview with strong biblical allusions (including repeated references to Gen 6:14), plus comic hero awkwardly prays to God by his bed, character has trouble fulfilling God’s commands so God tells him to ask and he shall receive, and at least two overt references to the New Testament (including a reference to alpha and omega, one of the Book of Revelation’s most important designations for Jesus), but, other than that, movie does not make it clear that the appearance of God in incarnational human form is always Jesus Christ, movie contains a heretical reference to God living in all things (a pantheistic pagan concept) when (in reality) the omnipresence of God means that everything in the universe is immediately in God’s presence (not that God lives in everything), and God character says the story of Noah’s Flood is more a story of love than a story of God’s wrath (which can be a Christian view of the Flood since Noah’s ark is indeed a symbol of God’s provision for those who love and obey Him), and inside joke about star’s previous movie shows marquee that says “The 40 Year Old Virgin Mary”; four or five light profanities, plus some scatological jokes, especially about bird dung; comic violence such as man hurts himself and falls sometimes while trying to build another ark and exciting action violence when raging flood waters carry ark downstream; no sex scenes; no nudity; no alcohol; no smoking; and, lying and deceit rebuked.

Don’t expect EVAN ALMIGHTY to make many deep theological points about the nature of God or biblical truth. This is, after all, a light family comedy. What you can expect, however, is a funny, joyful, and heartwarming family movie with a thrilling ending that makes up for a couple theological mis-steps.

In the story, Evan Baxter, the TV anchorman from BRUCE ALMIGHTY, played in a goofy but winsome manner by Steve Carell, moves his wife and three sons from Buffalo to Washington D.C. after being elected to the United States Congress. Evan wants to change the world, and after being told by his wife to pray, he prays to God for help in changing the world.

God takes Evan up on his offer. He commands Evan to build an ark just like Noah, because a terrible flood is coming on Sept. 22. Evan tries to get out of the job, but God won’t let him in a series of sometimes funny episodes involving animals following Evan around and Evan’s facial hair.

The problem is, Evan’s family doesn’t believe him. It takes divine intervention to help convince them. Even then, however, the working out of God’s prophecy comes in a most unexpected manner, leaving everything in doubt until the very last moment.

EVAN ALMIGHTY is a cute, entertaining family movie for the seven and up crowd. It is hilarious and poignant with a positive ending that redeems some of the silly plot holes.

The best thing about the movie is that it takes God and the Bible seriously, though it doesn’t delve too deeply into these subjects. There are even a couple references to the New Testament, including a reference to alpha and omega, one of the important designations of Jesus Christ in the Book of Revelation. And, the movie contains references to serving God and obeying God, even in the little things, under the heading of doing little “acts of random kindness.”

Other than these things, however, there is a pantheistic, heretical description at one point, where God is said to live inside everything. Of course, this is a false interpretation of God’s omnipresence, which actually means that everything in the universe is immediately in the presence of God, who exists outside of space and time but who is intimately involved with every aspect of the physical universe, including all of humanity.

Also, despite the one allusion to Jesus Christ, the movie does not make it clear that, when God appears to us in human form, he always appears as Jesus Christ as noted in John 1. Thus, EVAN ALMIGHTY should have had more overt references to Jesus when the God character appears. As a result, the movie may be confusing to Christians, especially Christian children, and mislead non-Christians about the real nature of God. In spite of the movie’s excellent use of some biblical references, therefore, the movie is still too coy about the Jesus issue. Ultimately, the movie is a lightweight and light-hearted exploration of God that avoids getting too explicit.

Still, EVAN ALMIGHTY is an improvement over BRUCE ALMIGHTY. It is also more family friendly. As such, Christians will be able to use the movie’s biblical allusions and take the opportunity to tell their neighbors about the Great I Am, the real incarnation of the Alpha and Omega, the Beginning and the End, our Savior, Jesus Christ. After all, true obedience to God also means obeying the Word of God. And, following Jesus, the Word Made Flesh, is the ultimate fulfillment of true obedience to God.