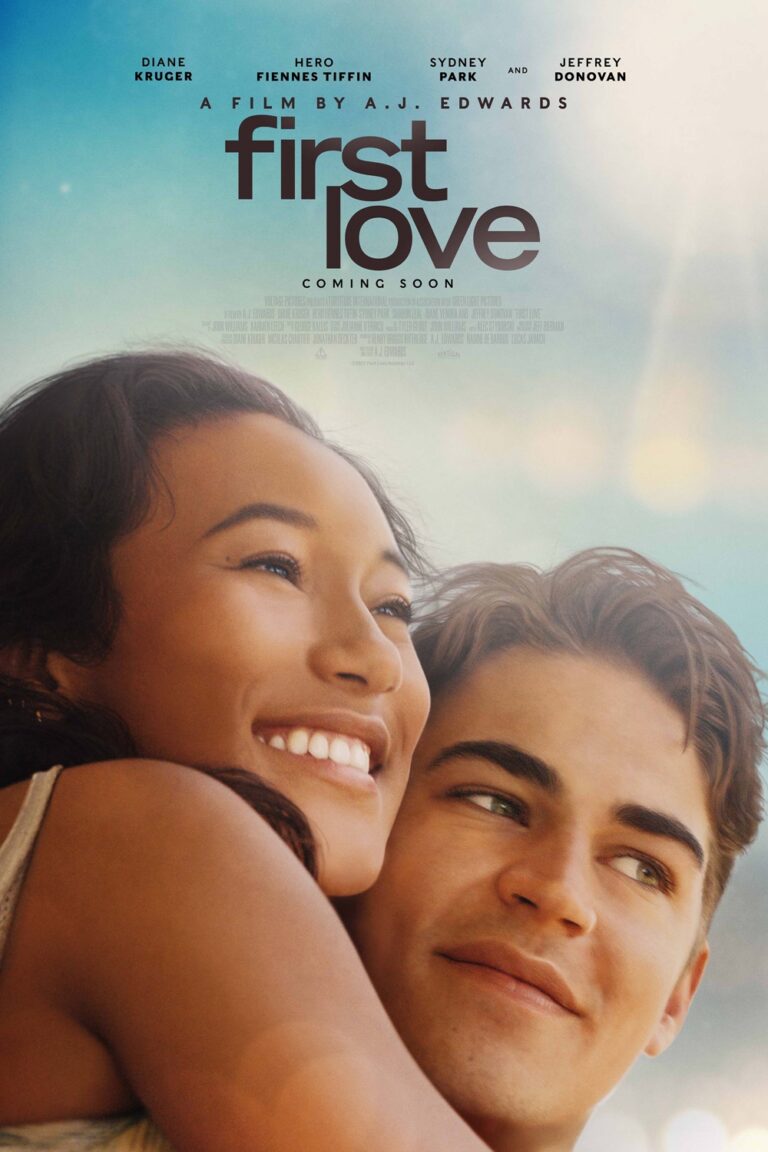 FIRST LOVE is a coming-of-age romance on Amazon Prime. Kay and Greg Albright, and their two sons, Nick and Jim, face the 2020 COVID economic downturn in America. Greg loses his job and struggles to find another. So, Kay returns to work full time to make ends meet. They eventually must sell their house and settle for a lower standard of living. Meanwhile, their son, Jim, falls in love with a young woman, Ann. Ann first loves him, then leaves him, then returns to him. Eventually, Jim and Ann find a way to try to make their own happiness by getting married.

As a teenage romance, FIRST LOVE is depressing. The characters aren’t really developed nor even fleshed out, making it difficult for viewers to connect or sympathize with them. Mrs. Albright, perhaps the only sympathetic character, caps off the agonizing anticlimax with the words, “You can’t go through life waiting for happiness. You have to make your own.” This is what apparently passes for a poignant, thought-provoking line. FIRST LOVE adds insult to injury with numerous scenes of love making.

(HH, Ro, AbAb, L, V, SS, NN, A, MM):
Dominant Worldview and Other Worldview Content/Elements:
Strong humanist worldview with some Romantic elements promotes sexual immorality, including among teenagers, and concludes with the idea that happiness must be purely man-made
Foul Language:
At least one obscenity
Violence:
Brief scuffle where a young man grabs another by the collar before turning him loose and walking away
Sex:
Strong sexual content includes partially depicted and implied sex scenes, people in various stages of undress, and much kissing and caressing
Nudity:
Partial upper female nudity (side of female breast), a teenage couple are nude under bed covers twice, and an older woman is seen nude shoulders up while engaged in intercourse
Alcohol Use:
Two young men drink beer at a pub
Smoking and/or Drug Use and Abuse:
No smoking or drugs;
Miscellaneous Immorality:
Young woman drops her boyfriend to try other partners, and a couple speaks very harshly to each other in a few scenes.

FIRST LOVE is an attempt at a coming-of-age romance, where a young man falls in love while he, his brother and their parents struggle financially in present-day America. Streaming now on Amazon Prime, FIRST LOVE is a disappointing movie on many levels, with poor writing, undeveloped characters, sexual immorality, and a strong humanist worldview with immoral values where human beings make their own happiness if they can.

The movie’s attempt at a coming-of-age romance begins with the Albright family, Kay and Greg, and their two sons, Nick and Jim, as they come face to face with the economic downturn of present-day 2020s America. Greg loses his job and struggles to find another, making it necessary for Kay to work full time to make ends meet. They eventually must sell their house and settle for a much less upper middle-class life. During this time, their teenage son, Jim, falls in love with a young woman, Ann Matienzo, who first loves him, then leaves him, then returns to him, and eventually, through all the personal and family trials they face, find a way to try and make their own happiness by getting married.

This teenage romance is one downer of a movie. None of the characters are really developed or even fleshed out, making it difficult to connect to or sympathize with them. The father figure, Mr. Albright, far from evoking pity, elicits distaste and at one point rage. The heroine, Ann, is very foolish, rejecting a young man who cares for her deeply to keep her options open, “have a lot of partners, see what [she] like[s], and experiment.” The hero, Jim, would be a bright spot in the movie if he had even a modicum of character development, but the movie’s poor writing robs the viewer even of this consolation. Mrs. Albright, perhaps the movie’s only sympathetic character, caps off the agonizing anticlimax with the words, “You can’t go through life waiting for happiness. You have to make your own.” This is what apparently passes for a poignant, thought-provoking line in FIRST LOVE.

Philosophical fragments aside, the movie’s dominant worldview is a depressing humanism where human beings make their own happiness if they can. Also, Mr. Albright at one point says, “Memories save you.” The movie purports to be a romance and adds insult to injury with numerous scenes of love making, however meaningless and passionless they may be. Teenagers play a challenge game where kissing, removal of clothing, and other sexualized acts take place. As teenagers and late college age, Ann and Jim are seen in various stages of undress – underwear, bathing suits and nude under bed covers. After being left home alone one evening, and after exchanging caresses, Jim asks, “Do you want to?”, and Ann replies, “Yes,” it’s implied they make love, and a flashback later depicts them as having intercourse. In another scene, a man and wife have relations on their 21st Anniversary. They remove their clothes, and he is then shown on top of her in bed. Given the absence of any discernible redeeming values in FIRST LOVE, it’s no wonder that media-wise viewers are skipping this romance.