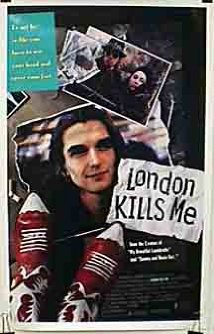 LONDON KILLS ME is a dark, depressing film about young English drug dealers and one youth who wants to break away from his life on the London streets. The film is poorly written and directed, and fails to arouse the audience's sympathy or interest. LONDON KILLS ME is a low-budget bomb that contains extensive nudity and graphic obscenities.

LONDON KILLS ME is a dark, depressing film about young English drug dealers and one youth who wants to break away from life on the London streets. Clint hustles drugs by day for his friend Muff and sleeps on the streets at night. However, he longs to get a respectable job. Hemingway, a restaurant owner, promises Clint a job as a waiter if he can get a decent pair of shoes. As Clint searches for a pair of shoes, he and his friends vie for the affection of Sylvie, the only girl in the group. Tensions rise, Sylvie sleeps with Muff, and Clint still doesn’t have shoes. Later, Clint steals stepdad’s shoes but later has them stolen during a Hindu religious service. Clint finally swipes a pair of boots, but they belong to Hemingway, the restaurant owner.

Writer/director Hanif Kureishi, who wrote the homosexual sleeper MY BEAUTIFUL LAUNDRETTE, tries for a British version of DRUGSTORE COWBOY, but with little success. His story is dull and his characters are sad, pathetic creatures who only know how to steal and to betray. We are supposed to feel sympathy for them, but we end up not caring because the characters, and the story, are so poorly drawn. The technical aspects of the film are not any better. This is Kureishi’s directorial debut and it shows in every frame. LONDON KILLS ME should spell death at the box-office.