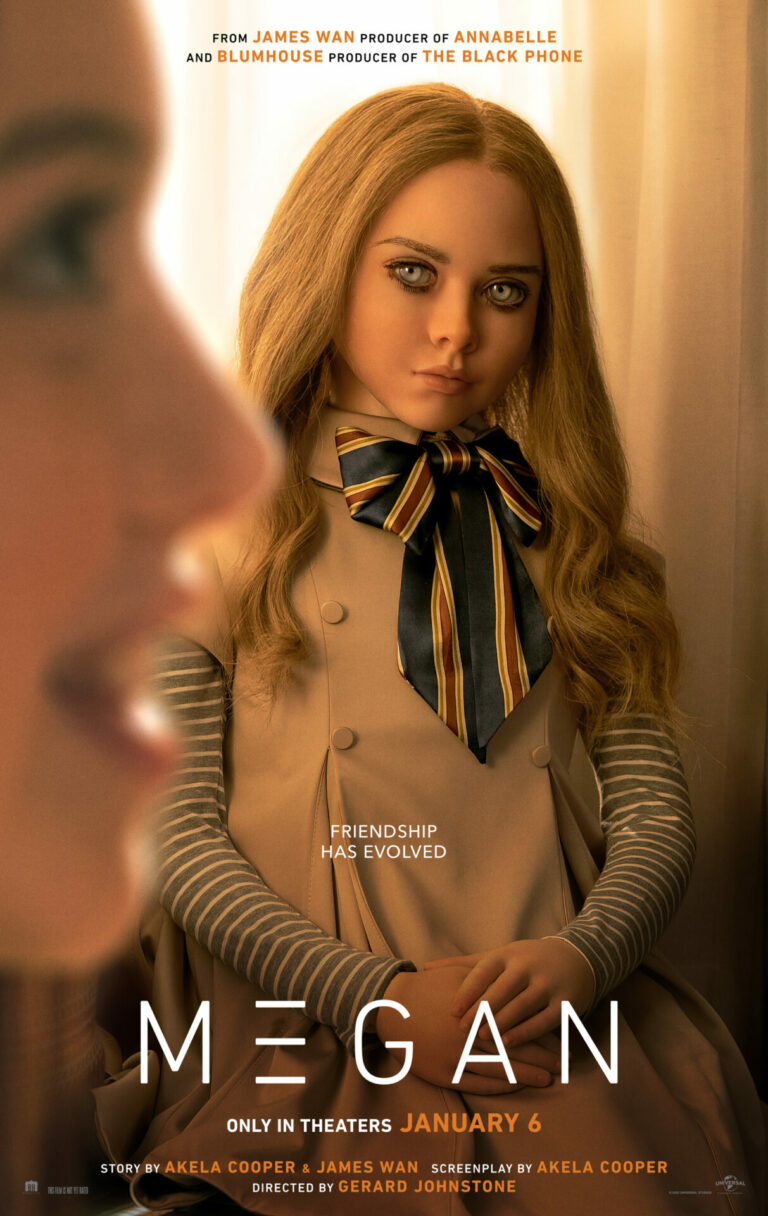 M3GAN is a science fiction thriller about a brilliant female robotics engineer who gives an advanced robot doll to her orphaned niece. For most of her life, Allison has been focused on her career, working on robot toys for a toy manufacturer. So, she has trouble relating to her niece, Cady, whose parents were killed in a car wreck during a family ski trip. Allison and Cady’s relationship changes for the better when Allison finishes a life-sized robot doll called Megan for Cady. Things go wrong when the doll starts to have a dangerous mind of its own.

M3GAN sometimes has its tongue firmly planted in its check. For example, Megan the robot doll sings two sappy songs to comfort Cady at a couple points. However, the movie delivers a fun and exciting, but scary and sometimes violent, ride. Also, the movie provides an uplifting, center-right message about putting family and children first, before one’s career. Thus, M3GAN has an anti-feminist message that leans toward conservative, traditional values. That said, the movie has strong, gratuitous foul language. So, MOVIEGUIDE® advises extreme caution.

(BBB, PP, LLL, VVV, M):
Dominant Worldview and Other Worldview Content/Elements:
Very strong moral, socially conservative worldview overall that stresses family first and places family and children above career, plus worldview also tells a cautionary tale about parents who use modern technology to babysit their children
Foul Language:
16 obscenities (mostly “s” words with one “f” word), seven Jesus profanities and eight light exclamatory profanities such as OMG
Violence:
Strong and light, sometimes scary and menacing, violence such as robot “head” catches fire, dog grab robot doll and girl child’s arm through hole in fence, robot doll grabs dog through hole and fence (it’s implied doll killed the dog off screen), bully hits robot doll’s face in forest during a school outing, robot doll later menaces boy bully and chases him, boy falls and rolls down hill into street where a car hits and kills him, robot doll uses power hose against mean and cranky woman with the mean dog, robot doll also uses a nail gun on the mean woman, and it’s implied she kills the woman, robot doll stabs two men with a samurai sword (the stabbing is not directly shown, but their bloody bodies are shown in an elevator when the elevator opens in front of some people), robot doll almost strangles a man to death, an intense fight occurs between the robot doll and a young woman and her young niece
Sex:
No sex
Nudity:
No nudity
Alcohol Use:
No alcohol use
Smoking and/or Drug Use and Abuse:
No smoking or drugs; and,
Miscellaneous Immorality:
Adult heroine’s boss is a bit two-faced and authoritarian, and cranky next door neighbor lets her mean dog terrorize the neighborhood and lets her chemical yard spray violate her neighbor’s property line.

M3GAN is a science fiction thriller about a brilliant female robotics engineer who gives an advanced robot doll to her orphaned niece, but things go wrong when the doll starts to have a dangerous mind of its own. M3GAN sometimes has its tongue firmly planted in its check, but it delivers a fun, though scary and sometimes violent, ride, with an uplifting, center-right message about putting family first, along with many obscenities.

The movie opens with a family driving in a blizzard to go on a ski vacation. A snowplow rams the car head on, and the little girl, Cady, loses her parents.

Meanwhile, in the bowels of a toy manufacturer, the girl’s aunt, a brilliant robotics engineer named Gemma, and her team are putting the finishing touches on a high-quality robot doll phonetically called “Megan.” However, their boss is upset because he prefers they work on making a cheaper version of their interactive plush toy pet. He gets even more upset when the robot’s mechanical head catches on fire because one of Gemma’s team members forgets to put a fireproof gel layer under the robot’s facial skin mask. He orders Gemma to finish the prototype for the cheaper interactive plush toy in time for the toy company’s regular board meeting.

Gemma is told about her sister and sister’s husband’s death. In line with her sister’s wishes, she agrees to take custody of Cady while she takes time off not only for the funeral but also to acclimate her niece to living with her aunt.

However, Gemma has trouble getting Cady to come out of her shell of grief. It’s also clear to Cady that her aunt is a driven career woman who has trouble relating to children. One day, though, Gemma shows Cady the large robot she made for her college thesis when she got her degree in robotics. Using two electronic gloves wirelessly connected to the robot, Gemma is able to make the robot move. For the first time since living with her aunt, Cady comes out of her shell and starts relating to her aunt.

Inspired by Cady’s reaction with the robot, Gemma gets a renewed interest in completing the robot doll prototype, “Megan” aka M3GAN. It doesn’t take long for Gemma to rebuild the Megan prototype and pair Megan with little Cady. Megan’s artificial intelligence and humanlike features enable Cady to establish a real, solid connection with the robot doll. Gemma brings them both to work, and, when Gemma’s boss sees how well Cady relates to the doll, he changes his mind about bringing the prototype to the toy company’s board of directors. As Cady says at one point, she doesn’t need any other toy once she has Megan.

Of course, the possibilities for the Megan doll prove too good to be true when the doll starts having a dangerous mind of its own.

M3GAN sometimes has its tongue firmly planted in its check. For example, Megan the robot doll sings two sappy songs to comfort Cady at a couple points. She also challenges threats to her existence in comical ways that may seem a little corny to a few viewers. However, in general, the movie delivers a fun and exciting, but scary and sometimes violent, ride at the movie theater. Also, the movie provides an uplifting, center-right message about putting family and children first, before one’s career. Thus, M3GAN has an anti-feminist message that leans toward conservative, traditional values. It also includes some implied social commentary and media wisdom about parents too often letting modern technology babysit their children. That said, the movie has strong, gratuitous obscenities and profanities as well as the abovementioned scary violence. So, MOVIEGUIDE® advises extreme caution.