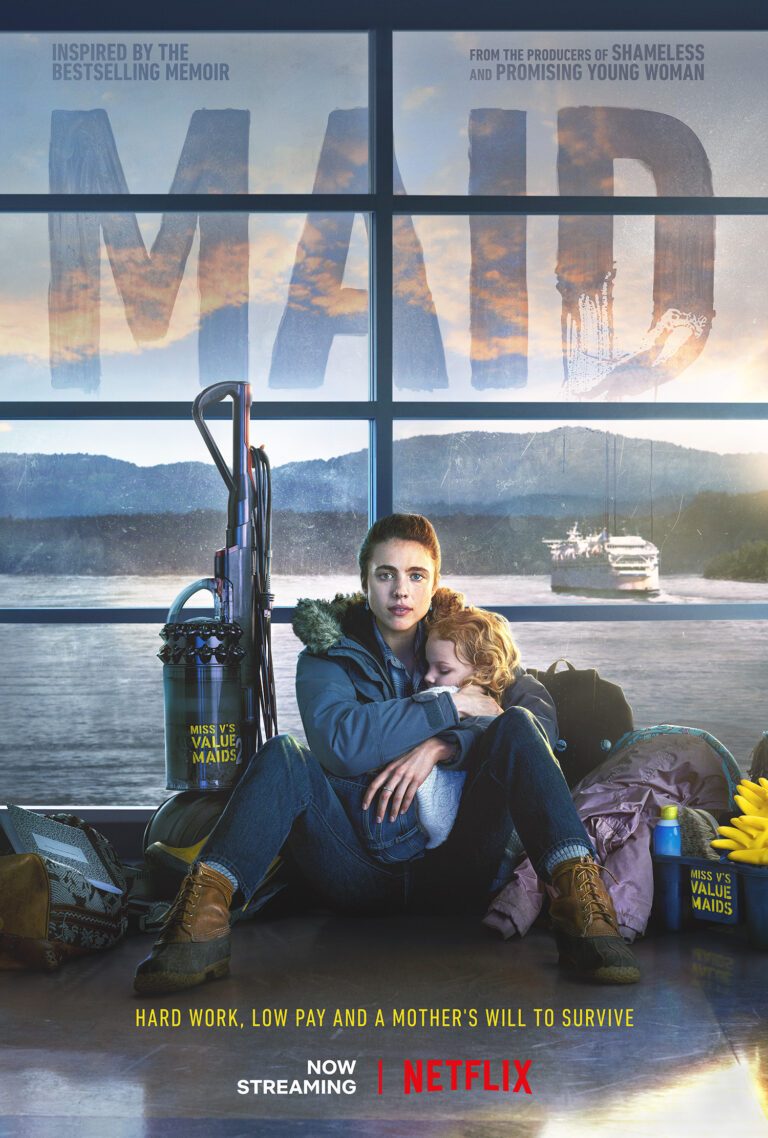 Netflix’s dramatic 10-part miniseries MAID is about a young woman named Alex who’s trying to escape an emotionally, almost physically abusive relationship with her boyfriend, Sean. She takes her 3-year-old daughter, Maddy, and flees in the middle night. From there, Alex learns the hardship of being newly independent after being controlled for so long by Sean. She gets a job cleaning people’s houses and tries her best to make a better life for her and Maddy. However, Sean tries to get custody of Maddy.

MAID is a well-crafted limited series with terrific, realistic character development. The directing, cinematography, casting, and writing are excellent. MAID has strong Christian, moral content. The love between a mother and a child is prominent. Forgiveness and honesty are promoted. The title character’s father is a practicing Christian in the series, which is sometimes difficult for her to process because of the issues in their past. Although there are all these positive qualities, MAID has a lot of immoral behavior and content, including alcoholism, gambling, violence, drug abuse, foul language, nudity, and sexual immorality. So, MOVIEGUIDE® advises extreme caution.

(CC, BB, PaPa, HoHo, LLL, VV, SS, NN, AAA, DD, MM):
Dominant Worldview and Other Worldview Content/Elements:
Strong Christian, moral worldview overall includes a strong representation of a love between a mother and a child is presented in multiple different relationships (including what a proper parental relationship should look like), honesty and acceptance of the truth is a prominent theme, one character practices Christianity openly throughout series, forgiveness is also prominent in this series especially towards the end, and perseverance extolled, but one character follows a more pagan and hedonistic lifestyle, and homosexuality is spoken of and briefly acted out
Foul Language:
Excessive foul language throughout the series includes about 260 obscenities through 10 episodes, 20 profanities, 25 crude words relating to male or female genitalia and other body parts, one scene depicts vomit, a few uses of the middle finger, and multiple lines about using the restroom
Violence:
Brief light or strong violence includes man throws glass items angrily at girlfriend and nearly hits her, domestic violence victims and survivors are shown throughout series, and some have noticeable bruising, a person threatens to cut a dog’s paw, man holds woman back as if he’s going to hurt her; it’s implied a father yells at his, child angrily, a house invasion is depicted with some blood, a manic psychological breakdown occurs, and some talking about physically hurting someone (such as strangling or beating)
Sex:
Light and strong sexual content and behavior in 10 episodes includes mild depictions and talk of sex, a few scenes where sex is implied through words, three scenes where sex between two people is implied visually (one undressing of women’s pants, one of a man and woman lying naked in bed), homosexuality is spoken of and briefly acted out, undressing of a woman’s shirt, sex is explicitly talked about in a few scenes as are prostitution and pornography, self-abuse is implied, depictions of sex toys, and characters use Tinder for hook ups
Nudity:
Some natural and sexual/explicit nudity is shown through the 10 episodes, such as a few scenes with upper male nudity, two or more scenes with a male wearing only briefs, a man and woman sleep naked together (not fully shown), a mostly naked woman is depicted, a few photos show upper male nudity and bikini models are depicted, undressing two separate woman top and bottom are depicted, and an embroidery of a naked woman’s body is shown
Alcohol Use:
Various levels of alcohol use and abuse includes social drinking, depicted alcoholism turns to sobriety then to a relapse, drunkenness is presented multiple times, and some drinking due to life changing events
Smoking and/or Drug Use and Abuse:
Some scenes with cigarette use, discussions about and depictions of vaping, mild use and talk about drugs; cocaine is mentioned, marijuana is heavily spoken of and briefly depicted, giving cough syrup to a child implied, one line about drinking turpentine, and multiple visits to marijuana dispensaries;
Miscellaneous Immorality:
Light and strong miscellaneous immorality includes light examples of stealing are implied and depicted, a Nazi statue is shown, child abuse is implied (not a main story line), gambling addiction is depicted, unnatural ways of getting pregnant are mentioned (IVF and using a surrogate), and having a dysfunctional family is a heavy theme.

OVERVIEW REVIEW: Netflix’s 10-part miniseries MAID is about a young mom trying to escape an emotional and nearly physically abusive relationship. She realizes how challenging it is to get back to being independent after being controlled for so long. However, she does what’s right for her daughter and does what she can to protect and care for her the best she can. This emotional roller coaster of a miniseries will keep people watching until the end, but extreme caution is advised for strong foul language, sexual content, some explicit nudity, substance abuse, and other immoral content and behavior.

Netflix’s 10-part miniseries MAID is about a young woman named Alex who’s trying to escape an emotionally, nearly physically abusive relationship with her boyfriend, Sean. She takes her 3-year-old daughter, Maddy, and flees in the middle night. From there, Alex learns the hardship of being newly independent after being controlled for so long by Sean. She gets a job cleaning people’s houses and tries her best to make a better life for her and Maddy. However, Sean tries to get custody of Maddy.

MAID is a well-crafted limited series with terrific, realistic character development. The directing, cinematography, casting, and writing are excellent. Everything about the series keeps viewers involved and wanting more. The scripts include laughs, emotions, anger, and even a little bit of crazy. Within the first few minutes, viewers will be rooting for Alex and for her to make a better life for her and her daughter.

MAID has many Christian, moral elements. The love between a mother and a child is prominent throughout the entire series, with many different displays of motherly attitudes and behavior. In the end, all the mothers and children love each other with everything they have. In addition to this, forgiveness and honesty are also very prominent in the series. Someone is constantly forgiving others and giving them a second chance, even when the person may not deserve it. Honesty and realizing the truth also happens a lot in this series, which causes a lot of acceptance of people and their behavior. Alex’s father, Hank, is also a practicing Christian in the series. This is difficult for Alex to understand considering their past. That said, there’s a lot of immorality depicted in MAID, including strong foul language, sexual content, some explicit nudity, substance abuse, and other immoral content and behavior. So, MOVIEGUIDE advises extreme caution.