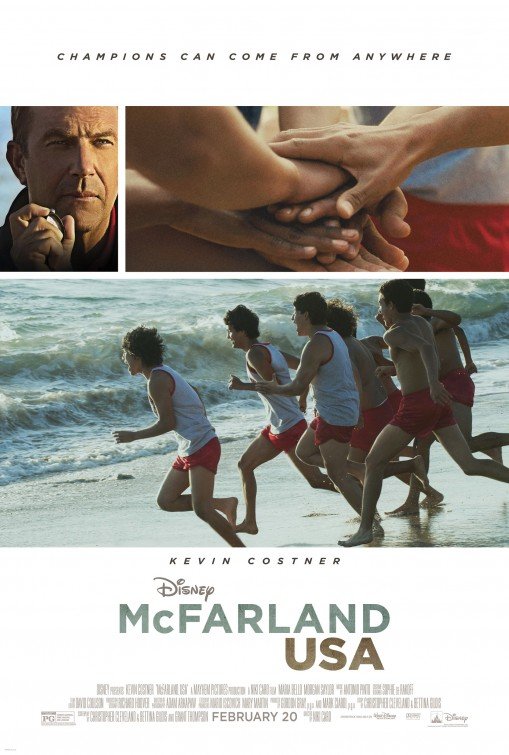 MCFARLAND, USA is an inspiring sports story taking place in 1987. It stars Kevin Costner as Jim White, a coach with a history of getting fired who’s forced to take a teaching position in the tiny town of McFarland, California. The predominately Hispanic town is pretty much a town with no aspirations and no bright future. Jim notices that many students, who also work in the fields as pickers, are unusually fast. So, Jim starts a cross-country running team to compete against teams from other schools that are much bigger than McFarland’s. The team not only inspires each other and Jim’s family; their speed also inspires the whole town.

MCFARLAND, USA is one of the best sports dramas in recent years. The real standouts are the young actors who show the struggle many communities face giving their young people good opportunities to succeed. It’s not just a feel-good story, it’s a good story period! MCFARLAND, USA has strong biblical messages as well as overt elements of Christian faith. A light caution is advised due to brief foul language and some implied violence.

(BBB, CC, PP, Pa, L, V, N, A) Very strong moral worldview with biblical messages of perseverance, hard work and sacrificing and fighting for family and friends, with strong Christian elements as young teenagers kneel in giving thanks to God in prayer after winning a race, woman says “God bless you” and Hispanics have many Christian crucifixes, plus some strong Pro-American, patriotic elements as Mexican immigrants show proud respect during the national anthem and story shows a positive view of America, plus light pagan reference to “the gods” in one student’s poem; three light obscenities, three light profanities, a boy vomits from nervousness; there’s an implied fight scene, the aftermath is shown, and it’s revealed that a young girl was pushed to the ground, and a man was stabbed, a boy’s face gets a cut after a football cleat is thrown at him, a teenage boy contemplates jumping off a bridge; no sexual content, though there’s a reference to teenage pregnancy and light kissing; upper male nudity; light drinking; no smoking or drug use; and, no other immoral, objectionable content.

MCFARLAND, USA is an inspiring sports drama starring Kevin Costner about an unlikely group of high-school runners competing in 1987 California.

Jim White is a high school football coach with a temper, which keeps getting him fired. Job opportunities become so few that Jim is forced to accept an assistant coaching position at a small town school in McFarland, California.

Jim drives his wife and two daughters into the poor farming town of McFarland and immediately regrets his decision. McFarland, which is predominantly Hispanic, is not the safe suburban neighborhood Jim wants for his family, but his wife convinces him to try making the new job work.

Almost immediately, Jim causes trouble with the head coach of the football team, and the principal asks him to step down and just teach Physical Education classes (PE). As he watches some of the students run track, Jim notices a physical strength and speed in some of the students that he hasn’t seen elsewhere. Many of the young boys work as “pickers.” They wake up at the crack of dawn and work in the fields picking fruit and vegetables until it’s time for school, only to go back to the fields after school. Additionally, many of them have to run to and from school because they don’t have cars. This gives Jim the idea to put together a cross-country running team.

Jim enlists seven unlikely Hispanic boys, one of whom is kind of overweight, onto his team and begins training them. After some missteps, Jim pushes the boys to achieve the unthinkable and actually beat cross country running teams at schools much bigger and more heavily funded than McFarland’s. Along the way, Jim and his family begin to fall in love with the tiny town, but some obstacles stand in the way of them staying long term.

Can Jim actually take this team to the state championship? If he does, will another school offer him a better job? Is McFarland too rough a town for his family? These questions make Jim re-evaluate what’s important, not only for his family, but also for the young men he’s inspired.

MCFARLAND, USA is one of the best sports dramas in recent years. Veteran actor Kevin Costner isn’t groundbreaking with his performance as Jim White, but he’s really comfortable in the role. The real standouts in MCFARLAND are the young actors who show the struggle many communities have to give their youth opportunities to succeed. With great cinematography and well-plotted conflict, the movie is highly entertaining. It does run a little on the long side and the beginning could have been trimmed, but otherwise, it’s not just a feel good story, it’s a good story period!

The true story of what took place in this small town reveals the possibilities that can be achieved through hard work and perseverance. MCFARLAND has strong moral, redemptive messages about sacrificing for family and friends and working hard to build a better life, as well as overt elements of Christian faith. A light caution is advised due to brief foul language and some implied violence.

All in all, however, MCFARLAND, USA is the kind of inspiring movie that media-wise families can strongly support.